Freak Show and Tell: The 132 Pounds of Scrotum That Captured a Nation's Imagination 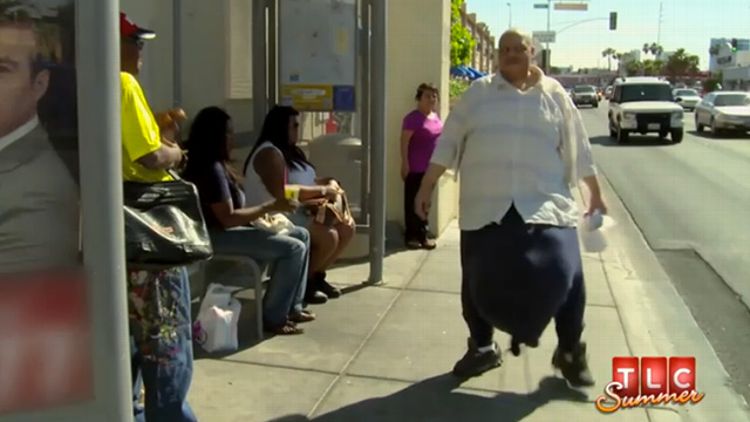 The Man With the 132-Pound Scrotum (TLC)

Who Is This Now? Wesley Warren.

Why Are We Watching Him? He’s taking us through his daily routine and the physical limitations placed on him by an unusual medical problem.

How Did He Get Here? Warren suffers from scrotal lymphedema, which has caused masses of diseased flesh to grow around his genitals, at a rate of about three pounds a month, since 2008.

What’s the Grossest Thing We See? Warren relies on public assistance, which has limited the medical care to which he’s entitled to his home state of Nevada where, he says, the last specialist he consulted about his lymphedema told him that the only surgical option would require castration; Warren doesn’t have the means to pay for an out-of-state alternative himself. However, after the crew filming this special brings him to an expert urologist in Irvine, California, that surgeon agrees to perform the operation (which he says will not damage Warren’s genitals) for free (thanks, TV!). OK, so: Up to this point, whenever Warren’s grotesquely disfigured growth has appeared on camera — which is a lot, because Warren spends most of his time indoors, because of his lack of mobility, and “dressing” his growth is cumbersome — it’s been blurred for broadcast, other than when, for instance, Warren covers it with a towel so he can rest his plate on it while eating. But I guess once he gets into surgery and it’s not filmed in a context where we see it in relation to the rest of his body, all bets are off and we see it in all its “glory.” As I yelled down the hall to my husband, who wisely spent this hour in his office, “It looks like a mini–Jabba the Hutt!”

What Have We Learned? If you live in the U.S. and are afforded only basic health insurance, such that a growth could completely engulf your genitals and continue to grow larger and heavier for half a decade while you are effectively powerless to treat it, try to get TLC to film you so that a surgeon will be moved by your plight and save your life at no cost to you or the taxpayer.

Why Are We Watching Him? He’s enlisting a handful of his 10 children to help him finish his life’s work: a medieval-style castle somewhere in the Carolinas.

How Did He Get Here? He’s concerned that an EMP burst will destroy power grids and lead directly to the collapse of society, so he’s decided to protect himself, his descendants, and no one else by building a castle in which they can ride out the apocalypse without fear of marauders.

What’s the Grossest Thing We See? Almost as soon as the kids arrive at the castle, a dozen amateur actors paid to pretend to be violent looters descend on the fortress, so that Brent can both show the kids what they may have to face in the future, and assess how well each of them responds when he or she thinks his or her life is in danger. A father does this to his children. The second-worst thing we see is Brent Jr. throwing a hissy fit when his father assigns him to help organize the bunker (the part of the compound that’s actually finished) with two of his sisters, because that’s women’s work.

What Have We Learned? The people who survive the apocalypse probably won’t be the ones the rest of us might wish would be left to repopulate the world.

Who Is This Now? Kathy.

Why Are We Watching Her? She’s meeting her boyfriend Brad’s parents for the first time.

How Did She Get Here? Brad, 25, has put off introducing her to his family because Kathy is 54.

What’s the Grossest Thing We See? Seeing Kathy pick out what to wear for this encounter is pretty rough: I’m not being ageist when I say that black mesh stockings, a matching black leather studded … outerwear bikini thing, and silver knee-high boots are a bad call because that ensemble wouldn’t be appropriate for a woman of ANY AGE to wear to a first (or ANY) meeting with her boyfriend’s parents. (She does manage to tone it slightly down in a black leather sheath dress.) At dinner, Kathy is clearly lying in wait for conversational openings she can use as a pretext for making outrageous statements in order to make everyone uncomfortable. Brad’s sister goes to NYU? Kathy lost her virginity there. When Brad’s mom, talking about the meatballs she’s served, comments, “The balls are good,” Kathy immediately jumps in: “He does have good balls.”

What Have We Learned? Apparently being an extreme cougar is a full-time job and you can never ever take even an evening off to behave like a normal person.

Why Are We Watching Him? He’s having a hard time getting along with an acquaintance.

How Did He Get Here? He’s coming to the end of his time as a patient in in-patient couples therapy.

What’s the Grossest Thing We See? First, some backstory: One of the issues that Joe’s fellow patient Heather is in therapy to work out with her boyfriend Dustin is that when he was younger, before he knew her, he performed in gay pornography (though he does not identify himself as gay or bisexual). When Joe found out about Dustin’s past, he brought some of the other male patients into his room, behind Dustin’s back, to watch one of Dustin’s old videos. That all happened several episodes ago, but Heather only just found out about it, so when Joe joins her at the table for lunch, she decides not to engage, and takes her plate into the kitchen. Joe follows her and faux-innocently asks if she knows why Dustin doesn’t wear shoes around the house. She says he should ask Dustin. Joe launches into a faux-calm lecture about how white trash and disrespectful it is to go barefoot. Heather initially doesn’t engage with him, but then changes her mind and points out to him that he may not be the best judge of what is or isn’t classy in that HE OWNS GIRLS GONE WILD. The fight escalates quickly, and ends with Joe throwing water on Heather and then running away to his room before Dustin can get close enough to punch him.

What Have We Learned? Joe Francis may be the worst person alive.

Who Is This Now? Evelina.

Why Are We Watching Her? She’s surprising her fiancé, Levi, at her plastic surgeon’s office.

How Did She Get Here? The planning of her wedding to Levi is not bringing out her best qualities.

What’s the Grossest Thing We See? The reason she brings Levi to the plastic surgeon is to surprise him with a round of Botox for his face in advance of their wedding (which she then makes him pay for). When Evelina and Levi return home, he goes into the bathroom, curious, to inspect his face and see if he can tell what’s changed. Evelina interprets this as his doubt that she has his best interests at heart, and she starts screaming and crying at him for not trusting her and showing it by daring to look at his own face.

What Have We Learned? Levi comments in an interview that Evelina is not fun to be around, but that she’s “so hot,” so clearly these two are destined to be together forever.