For Its 30th Birthday, ‘Ghostbusters’ Gets a Theatrical Rerelease and a Big ‘Vanity Fair’ Story 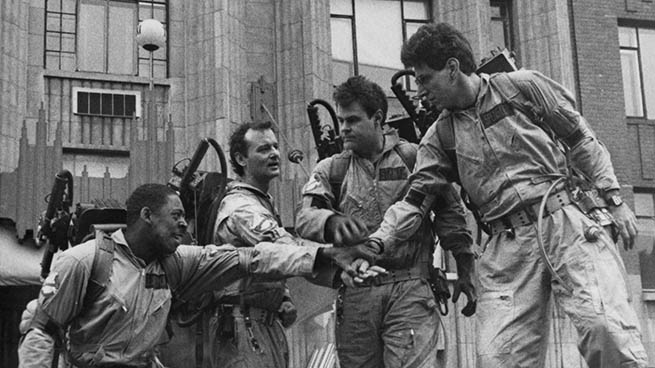 The endless chatter about a third installment, plus the inherent greatness of the original, means Ghostbusters has never really been far from our minds. But now that it’s 30 years old — original release date, June 7, 1984 — it’s time to get fully Ghostbust-ed.

Meanwhile, getting the jump on this whole impending nostalgia train was Vanity Fair, which just dropped a big ol’ making-of-the-movie piece, in which we learn some things. Like!

There were some truly nutty things we never did see. Dan Aykroyd wrote the original script, then chopped it up together with director Ivan Reitman and Egon Spengler Harold Ramis (only Ramis and Aykroyd are officially credited as writers). The first draft was “far darker” — impossible to make, according to Reitman — and “took place in the future” plus “on a number of different planets or dimensional planes.” There was also “an illicitly operated spectral storage facility in a deserted Sunoco gas station somewhere in northern New Jersey” and “a most unholy makeshift asylum” whose “tenants included the moping spirits of famous dead people.” For various reasons, both budgetary and thematic, all that was cut.

Also not on screen: John Candy, who was originally tapped to play Rick Moranis’s Louis Tully. When Reitman showed him the script, “[Candy] said, ‘I don’t know about this. I could do it, but I should do it with a German accent.’ He wanted [to be flanked] by two big dogs. I said, ‘I’m sorry, John — maybe next time.” Hmm. I don’t know. Moranis crushed it and all, but two big dogs is always a pretty chill thing to have around.

The times were an inspiration, in one very specific way: Says Reitman, “I basically pitched what is now the movie — that the [Ghostbusters] should go into business. This was [the] beginning of the 1980s: everyone was going into business.”

So was the vacation region of well-to-do Bostonians: “Aykroyd, Ramis, and Reitman went into overdrive to draft a shooting script — first holing up in Reitman’s offices and then fleeing to Martha’s Vineyard for a sequestered writing session. ‘[They were] two of the greatest weeks of my life,’ says Reitman. ‘We worked seven days a week … had wonderful meals with our families and then went back to work at night.'” PLEASE, IVAN, TELL US MORE ABOUT THE WONDERFUL TIME YOU HAD CREATING ICONIC COMEDIES?!

And there were at least one or two dramatics on-set: Like Bill Murray, picking up Sigourney Weaver the first time he met her, outside the New York Public Library. Weaver: “I went over and I introduced myself and he said, ‘Hello, Susan.’ [Then] he picked me up and put me over his shoulder and walked down the block with me … It was a great metaphor for what happened to me in the movie: I was just turned upside down and I think I became a much better actress for it.” Also: The Stay Puft Marshmallow Man was a guy in a suit, and there were something like nine suits. Why? Explains effects man Richard Edlund: “Several of them went up in flames.”

And there you have it — Ghostbusters was always straight fire, bro.