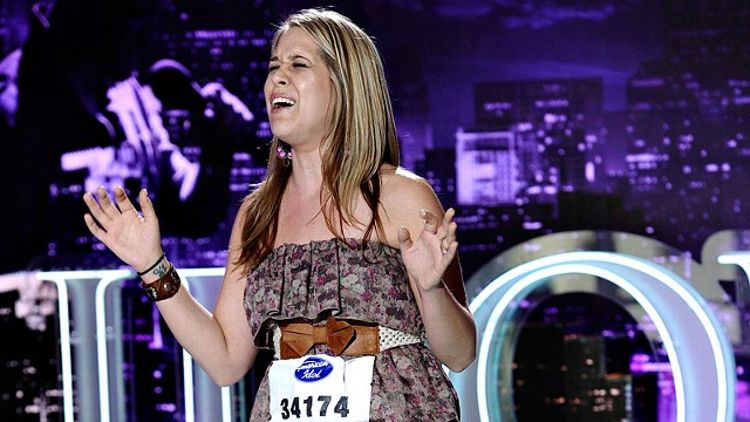 All season, Grantland Idol experts Mark Lisanti and Jay Caspian Kang will answer five very important questions about each performance episode. This week, Kang is “on assignment” at the Super Bowl, so Lisanti will be joined by Fake Jay Kang, his best guess as to how the otherwise-occupied pozole enthusiast would answer each question. Yeah, it’s getting a little weird up in here.

Lisanti: Just to preempt the choice that Fake Jay Kang is likely to make below, and thereby empty some of the orange sludge from his Haterade jug, I’m going with Rachelle Lamb. Yes, she’s the second contestant in as many nights to have escaped the dream-squelching oppression of her baby daddy, and she performed with her young daughter on the stage for maximum emotional blackmail effectiveness, but she can sing. And in the end, this is a singing competition. It’s also a musical day care, and her kid can play with Britnee Kellogg’s twins in a half-watched corner of a Hollywood Renaissance Hotel conference room while the two Spurned Country Mommies chase their dreams.

Fake Jay Kang: You can’t seem to get this through your head: I don’t care about who you pick. I don’t even read your sections. Do I have time for that between doing Kahlua body-shots with Julian Edelman and Danny Woodhead? Of course I don’t. Don’t be an idiot. I’ve been up for 48 straight hours, most of those spent riding around on Rob Gronkowski’s shoulders. I can see music now. And it doesn’t just appear as colors. It’s an entirely new visualization. You can’t comprehend this. You’re of the Old Way.

To answer the question, my appreciation for Castrato Pubescent Preteen Singing Machines (CPPSM) is well-established. And last night, Idol served up a prime specimen of eunuch euphony in Reis Kloeckener. It doesn’t matter how much he suffered in high school; the bullying has made him something special. I would have cried during his perfect “Lean on Me” performance, but I don’t cry anymore. I radiate grace. Aaron Hernandez taught me how to do this. I barely remember who Eben Franckewitz is, but we’re hurtling towards an epic Archuleta-off in the semifinals. The loser will have his testicles surgically restored, a procedure that will end his career.

Here’s where we tend to be a little more negative, though we prefer to think of it as “constructively critical”: Who were your least favorite contestants?

Fake Jay Kang: I have no time for Ethan Jones. He has the semi-sad backstory: father in rehab, negatively effecting the family band (are they Missouri Osmonds? Unclear), and there’s the tearful phone call to dad after the golden ticket. But I’m not going along for this particular ride. We’ve already wasted too much time discussing him. And I’m adding Edwin McCain’s “I’ll Be” to the Do Not Sing list immediately.

Lisanti: I’m out on Lauren Gray. It’s just too much. They bookended this St. Louis episode with so much CARRIE UNDERWOOD WAS DISCOVERED IN ST. LOUIS. WE ARE IN ST. LOUIS AGAIN. WILL WE FIND ANOTHER CARRIE UNDERWOOD IN ST. LOUIS? I BET WE WILL! OH, WHO’S THIS? A NEW CARRIE UNDERWOOD, PRAY TELL? WELCOME YOUR NEW CARRIE UNDERWOOD FROM ST. LOUIS! hype that I was choking on blonde hair extensions and scraps of a $500 designer cowboy shirt by the time Gray got a note out. (She was not wearing either of these, but she will be in three weeks.) There’s nothing quite like a premature coronation to get you off someone’s team.

So does the premature coronation thing mean that you’re done with John Keyser?

Lisanti: I mean. Look how handsome!

Fake Jay Kang: And that voice!

Mark Ingram: Given a second (or third, really) chance, could he have been the next Jacob Lusk?

Fake Jay Kang: I am literally going to murder you. I’m getting on Bob Kraft’s private jet, coming to the office, and watching Chad Ochocinco gut-stab you. Then I’m going to slowly pull out your intestines, wrap them around my head like I’m a vengeful Bib Fortuna, and put my foot in your lower abdomen. Don’t play. DO NOT PLAY.

Lisanti: I think I made another Bib Fortuna reference recently, but I think I see your overall point.

On a scale of “satin Mystic finishing-matte” to “sitting on a porch in Alabama in August, idly flapping a fan and reaching for a condensation-flecked pitcher of sweet tea,” how shiny was J-Lo last night?

Lisanti: It’s not even so much as a “shine” anymore as it is “God’s love being reflected off every exposed surface of her body.”

Real Jay Caspian Kang is somewhere else, probably with a member of the New England Patriots.
Mark Lisanti is where he always is: here.
Fake Jay Kang is not real, but he may soon will himself across the dimensional plane and into the Grantland office.

Has America's White-Hot Hatred of Horses Killed HBO's Luck? (Yes. Yes It Has.)

NBC Comedy Recap: Parks and Recreation, 30 Rock and the Battle for Thursday Supremacy