Has America’s White-Hot Hatred of Horses Killed HBO’s Luck? (Yes. Yes It Has.) 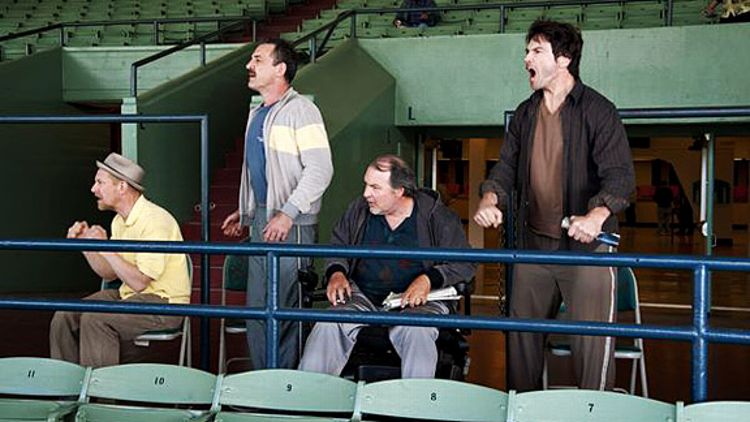 HBO has already committed to a second season of the horse-racing drama Luck, which is good news for the type of person who prefers to watch TV and never know exactly what’s happening. This is a person like myself (I continue to defend John From Cincinnati). I enjoy viewing scenarios that are simultaneously active and passive — “active” in the sense that the story is detailed and engrossing and idea-driven, but “passive” in the sense that what I’m trying to absorb is so dense and obtuse that the plot mechanics evaporate into an incomprehensible wall of propulsive dialogue. (As such, my favorite 2011 screenplay was Margin Call.) There’s nothing more relaxing than concentrating on the unfathomable. However, I don’t think this trait is common. The debut of Luck was watched by “only” 1.1 million viewers, which makes it about four times less popular than Boardwalk Empire and six times less popular than that zombie show. Moreover, the social traction of high-end television seems to be most accurately judged by the degree to which people are talking about it in public. And I just don’t hear people talking about Luck. I assume it’s big news in the world of degenerate gamblers, but those people are not reliable sources for TV gossip (this is partially because they are constantly pawning their televisions).

Luck features two major 20th-century actors (Dustin Hoffman and Nick Nolte), a director who excels at filming quiet men who stare at violence (Michael Mann), and a writer (David Milch) who could walk into a room full of domestic terrorists and immediately be perceived as the craziest guy any of them had ever met. It airs on Sunday night, which is TV code for “meaningful.” The premise is strong and the execution is flawless. So why isn’t everyone losing their mind over this program? There are many theories: The show is overly consumed with masculinity. The dialogue is saturated with arcane jargon. The narrative isn’t designed to make its audience “care” about characters, which (I guess) is important to those who can’t accept that people on TV aren’t real. All of these statements about Luck are semi-true. But I think the issue is something else.

Every episode of Luck forces the viewer to spend a lot of time watching horses run for glory. Now, you’d think this would make us happy — I’ve long argued that horses are the world’s third most beautiful mammal. There was a time when that opinion was widely shared; there are at least 19 episodes of M*A*S*H where Harry Morgan says, “The outside of a horse is good for the inside of a man.” But Harry Morgan is dead, and so is American’s “ho-mance” with the equine. Today’s fat, soulless Xbox slave would rather punch a horse in the throat than watch 20 minutes of Luck. This is our collective problem.

I first noticed this trend about six years ago, when I came across a (since terminated) blog called horsehater.com. The site’s arguments were incendiary and unusually violent. It was co-created by Alex Blagg, a mustachioed comedian now trying to make money by claiming he’s already rich (or something like that). I asked him if the horse hatred he pioneered had now become normative.

“I think you’re onto something really big with this one,” Blagg said from his estate in Los Angeles. “David Milch is clearly obsessed with promoting the horse agenda. Luck? All about horses. Deadwood? A lot of horse stuff. NYPD Blue? Some police horses in there. Milch is basically the Leni Riefenstahl of horse propaganda. And he’s not the only one in Hollywood with a pro-horse agenda. Seabiscuit, Secretariat, War Horse, Sex and the City 2 … I definitely think hatred of horses has gone more mainstream, mostly as a backlash to Hollywood and all the fat cat pro-horse lobbies shoving horses down our throats.”

Obviously, Blagg traffics on the radical fringe of anti-horse sentiment. But perhaps his ideas are worth considering. Are smart TV producers taking advantage of America’s latent horse loathing? Take the hugely successful Game of Thrones: On the surface, it seems like a pro-horse vehicle. There’s an entire race of “horse people” (the Dothraki), led by the fantasy equivalent of Baltimore Raven Ray Lewis (Khal Drogo). Yet what happens when a Dothraki queen gets pregnant? She has to eat a raw horse heart. This would be like forcing a female character to consume Big Dan’s heart at the conclusion of Where the Red Fern Grows. I have no idea where the realm of Game of Thrones is supposed to exist or when it was supposed to have taken place, but I do know this — it’s a bad realm for horses. And people can’t get enough.

The inescapable reality is that the horse is no longer central to the American experience. According to the American Veterinary Medical Association, only 1.8 percent of U.S. households in 2007 owned a horse (I’m using the 2007 statistics because that was the last year Americans still cared). If this census had been taken in 1907, I bet that figure would have been twice as high. Meanwhile, celebrity tree sloth ownership continues to go through the goddamn roof. If Luck were focused on sloth racing, it would probably be more popular than The Voice. And what does that say about our country? Nothing good.

I’m glad Harry Morgan never had to see this.