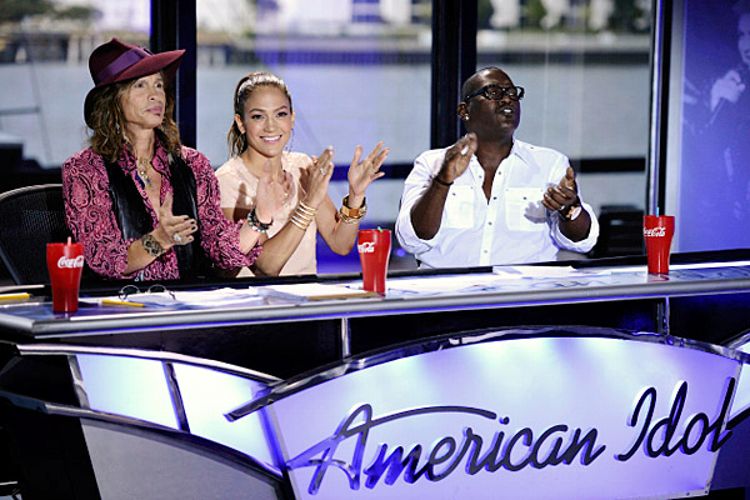 Who was your favorite contestant? (Note: Your “favorite” does not necessarily have to be “talented” or “stand any chance of winning whatsoever.”)

Kang: I’d prefer not to. I don’t understand why Idol won’t deviate from it’s recent strategy of presenting America with a choice between pubescent singing machines and older, grotesque pity gardens. It’s like voting for your favorite cast member on Toddlers and Tiaras. Do you vote for the poor, abused kid who had no childhood or her insane mother? Would you like Splenda or Jailbait Splenda? But if Ryan Seacrest held a gun to my head and screamed that if I didn’t choose a favorite, I would have to spend the next year stuck in a room with Gabi Carrubba, tap dancing “champion” from Connecticut, who would tap dance for 23 hours a day and talk about traffic on I-84 for the other hour; well, under those circumstances, I think I’d pick Phillip Phillips, who works in his father’s pawn shop in Georgia and looks like what would happen if Luke Walton impregnated Jude Law. At the very least, his parents didn’t drain their 401K and his little brother’s college fund to pay for years of singing lessons.

Lisanti: Now I feel stupid and vulnerable for having a “favorite” from last night. Way to close yourself off from real emotion, you diva-obsessed monster. But I’ll put it out there: Joshua Chavis, the 23-year-old from South Carolina who wants nothing more from life than to sing the national anthem at a NASCAR race. (Well, and to be the next Jason Chris Brad Mraz Daughtry-Paisley.) When Jennifer Lopez called him “sweet and cute” after his (sigh, awful) performance he momentarily turned into a Hillbilly Stefon who just heard an underground club called Tireswing (they have “Human Marmalade,” that thing where a little person dances inside a giant mason jar full of strawberry preserves) just opened in the back of the general store, and, while that doesn’t get you a ticket to Hollywood, it certainly earns you my devotion. For this week, obviously they sent him home, he couldn’t even sing a little.

Based only on the impossibly small sample size of last night’s performances, who’s going to the Finals and why?

Lisanti: I’m tempted to advance young David Leathers Jr. straight to the finals, partly because he came out of the gate like a singing, marginally less obnoxious version of Astro, and partly because he once defeated reigning Idol champion Scotty McCreary in a talent competition. Logic dictates he’s the inevitable winner! (Note: This is exactly how logic works, I still have the 6th grade math textbook to prove it.) But I’m going to go with my gut — like high-stakes gambling, all good talent show prognostication values pure emotion over intellect — to set up a Premature Finals of Shannon Magrane and Phillip Phillips Jr. Never bet against a six-foot-tall teenage volleyball player who makes Steven Tyler so excited he blurts out she’s as “hot, humid and happening” as their Savannah* host city, risking fatal chin-music by her dangerously nearby former Major League pitcher father. As for Phillip Phillips Jr, the Tween Generation clearly needs its own Dave Matthews, and I need to be enraged anew every week he’s allowed to honky-stomp his dirty flip-flops on the stage while flailing at the three chords he learned from Under the Table and Dreaming. Solid bro, though. Totes sols.

[*Did you catch Randy calling Savannah a “jump-off” as they arrived? Doesn’t that mean he wants to fuck the city? Not really current on my slang.]

Kang: Shannon Magrane. I can’t say anything about her without feeling terrible, so I’ll just go the old SABR route and point out that her father, Joe Magrane, went 5-9 for the Cardinals in 1988 with a 5.4/2.8 K/BB ratio, good for a FIP of 2.99. The next year, Joe Magrane pitched 234.2 innings and struck out 4.87 batters per inning. His walk rate stayed almost exactly the same. BLERRRRRRGH. RAWR! Impossibly low k-rate! [INSERT Chien Mien Wang (sic) joke!]

I would imagine that Shannon Magrane says something really bitchy during Hollywood Week and makes someone cry. I think David Leathers will search for meaning and say things like, “I can’t share a stage with people who aren’t committed as me.” Both of them will ride America’s growing resentment into the Finals.

Is “Tent Girl” a) an inevitable, organic sign of our current political and social climate, b) Idol producers’ cynical attempt to hijack the Zeitgeist, or c) just a happy, uncomplicated hippie in the best Bowersoxian tradition?

Kang: Was “Tent Girl” an advertisement for Ron Paul? Hey, Commies! See what your revolution has brought? This poor girl and her bespectacled boyfriend live in a tent in the woods because some teacher, whose salary was paid with your hard-earned tax dollars, encouraged this girl to follow her artistic dreams. And now Obama wants to build more “charter schools.” Do you want your country to be populated with millions of people who have no skills, who vaguely, half-heartedly chase their dreams of stardom, and live in tents/off their parent’s money?

If you ever bring up Bowersox’s name in this dirty sort of context again, I’m going to reach over our cubicle divider and pour a cup of dip spit and sunflower shells down the back of your neck.

Lisanti: I hate to play the role of “conspiracy theorist,” but it’s hard not to picture Rupert Murdoch driving past Zuccotti Park inside an unmarked, impenetrably armored surveillance van and croaking, “I need to harvest this energy somehow. To destroy it from within.” And then ordering an Occupy Contestant planted inside his empire’s most efficient secret propaganda engine, the primetime TV equivalent of an evil mastermind’s plot for world domination through poisoning the water supply in a giant city. (H/t Ra’s Al Ghul.) But, you know, it’s also nearly as plausible they’re just a couple of poor hippies in a tent. Sooo Bowersox.

If a California court suddenly awarded Shaun Kraisman, the parasitic twin Ryan Seacrest was certain he’d killed off in the womb, a week with full access to Seacrest’s media empire and fortune, what would he do with the temporary windfall?

Lisanti: It’d be like the most boring version of Brewster’s Millions imaginable. He’d probably spend three full days trying to clear out all the Crate and Barrels in the Los Angeles area, waste an entire morning drive shift on KISS FM to play his ten favorite Mandy Moore songs, and demand to ride the trolley at the Grove with Kourtney and Khloe. Well, at least until he discovered methamphetamines halfway through Day 5. Then shit get rrrrayyyl, and out comes the chainsaw.

Kang: On Day 1, he’d load up the snow making machines at the Grove with Cocaine, hire DJ Paulie D and throw the worst party in the history of Los Angeles. By day five, he would be trying to adopt all the Octamom’s kids. On Day 7, he’d be standing on Seacrest’s doorstep with a loaded shotgun. Actually, I think I’d watch this movie. And I *love* Brewster’s Millions. That “buying a stamp and mailing it” move is still the most ingenious plot wrinkle ever written into a Hollywood script. Seriously, please, someone in OUR NEW COMMENT SECTIONS (!!!), tell me a better plot wrinkle than that.

In fewer than 100 words, can you tell the story of how Steven Tyler selected his beautiful scarlet hat [see image at top of post] for the opening round of auditions?

Kang: Where does one buy hats like that? And how many albums do you have to sell to pull it off? I think there’s some ceremony in Hollywood, where, if you go over, say 15 million albums sold, they give you all sorts of weird shit to wear in celebration. That’s where Mariah gets her diamond-encrusted stripper heels and where Nas invented the Esco brand.

Lisanti: I think I can do it in the six saddest words ever written:

Mark Lisanti is the editor of Hollywood Prospectus and has been trying to quit Idol every week since 2002, with very limited success.