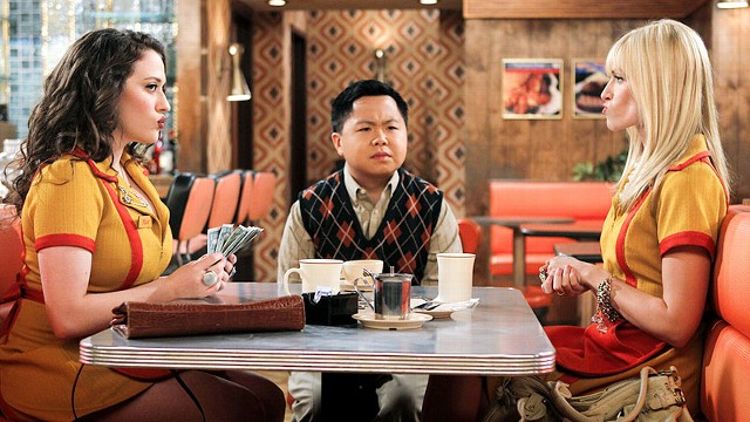 Andrew Ti, the beaten-down mind behind Yo, Is This Racist? brings his talents to the world of media to periodically search for the most racist character in TV and movies.

First, let’s get the obvious out of the way. After executive producer Michael Patrick King’s surly-ass and hilariously defensive performance at the TCA press tour, and overwhelming fan reaction from the readers of YITR? there really isn’t any other choice but for me to proclaim everyone’s favorite caricature Han Lee of 2 Broke Girls as the most racist character of the week. Which isn’t to say there weren’t contenders, including a particularly insane episode of the animated Napoleon Dynamite involving a Japanese exchange student, but the people and the news cycle have fairly loudly spoken.

A little background is probably in order. I don’t usually watch 2 Broke Girls, and I fully recognize that this show is not, you know, created with an Asian dude living in L.A. as the target demographic, but rather the much larger, and definitely more lucrative, audience of Americans for whom the diversity of New York represents a dangerous and head-scratching Other. (Actually, it’s probably worth further noting that I understand that almost all of TV is geared toward this audience.) But the quickest way to get to the heart of the matter is to say that the central tension of 2 Broke Girls appears to involve two white girls, one extremely sheltered and one slightly less so, who live and work in a diner in Brooklyn, where they’re forced to interact with a hilariously, uh, colorful cast of characters from all walks of life, and critically, a handful of people whose most salient character trait is that they’re not white.

By all accounts, MPK spent much of the TCA presentation defending depictions of the characters on the show, trotting out the “equal-opportunity offender” argument almost immediately before falling back on an Equal Opportunity Offender Hail Mary: “I’m gay! I’m putting in gay stereotypes every week! I don’t find it offensive, any of this. I find it comic to take everybody down, which is what we are doing.” The thing with Equal Opportunity Offenders tends to be, in general, that in their fervor to cover the ground of offending everyone, they tend to overlook the necessity of finding original and funny things with which to offend. It’s got to be pretty exhausting, after you’ve rattled off the black, gay, Asian (and I guess blonde) jokes you’ve already got handy, to even catalog and organize the people whose opportunity to be offended has yet to arise.

Enter Han Lee, the Korean owner of the diner where the girls, Caroline (the blonde one) and Max (the brunette one) work. It’s putting it mildly to say that Han Lee is a fairly regressive portrayal. To begin, he speaks with a broken, generically Asian accent, and then moves on to nicely tick off basically every possible Yellow Panic stereotype with an actually fairly impressive level of thoroughness. For real, it’s distressingly easy to imagine the writers sitting around and listing off every single ching-chong stereotype, ultimately deciding with some sorrow that a Fu Manchu mustache would be impractical for budget reasons. Or rather, it would be, except that would obviously be far too much time spent fleshing out this character. A tiny, greedy, sexless man-child, Han Lee did not disappoint as the B story in last week’s episode, involving his decision to raise the price of tampons in the ladies’ room in the diner.

OK, how baller is it that they have Han enter the bathroom doing a tried and true “so solly” routine, and actually bowing as he walks into the women’s bathroom? I guess that’s kind of the thing with racist imagery: Once it gets so thoroughly absorbed into the cultural lexicon, it kind of ain’t no thing to throw that in without even thinking about it. But if you think he was subservient to Max before, just wait until the actual tampon discussion gets started. Leaving aside the weird Harriet Tubman joke (please don’t tell me that’s some kind of fucked-up reference to picking cotton), Han’s bizarre inability to discuss or even look at the tampon machine (that he presumably owns) does everything shy of openly stating that he’s had contact with a vagina precisely one time in his entire life.

Now that the show’s nicely established that Han is probably a virgin, never content to leave just a single stereotype on the table, they round out the baleful brew by driving home that this entire conflict is driven by his childish immigrant greed, setting up the confrontation so that Max can deliver a seriously insane speech to the entire diner, landing on the punchline, “The man who thinks your menses should be more expensees.” How dope would it be to be a dude waiting for your tuna sandwich while all this shit went down?

The pervasive crime of Han Lee really boils down to his infantilized speech patterns, thrown in, I assume, just in case his Asian face didn’t drive the message that He Is Not Like You home enough, and you were starting to think of him as some kind of human being. At the TCA panel, MPK defended Han Lee as a character by claiming that, in recent episodes at least, the other characters in 2 Broke Girls had stopped making openly racist jokes about him, and instead were relying only on jokes about how short he is, evidently because that’s not an Asian stereotype anymore. Which does a hilarious job of missing the point, and feels pretty thin once you’re responsible for having him deliver the line, “Didn’t your mother ever teach you that is secret no-no private lady thing?” and having him spend literally 80 percent of his screen time this episode waving his hands around like a cartoon baby.

So, congratulations to Han Lee and 2 Broke Girls for their banner week in racism, taking home the trophy at a canter without even breaking into their impressively deep bench in Oleg and Earl, who missed out mainly by virtue of not having enough screen time. I’m feeling extremely confident there’ll be plenty of material on those two as the season wears on.