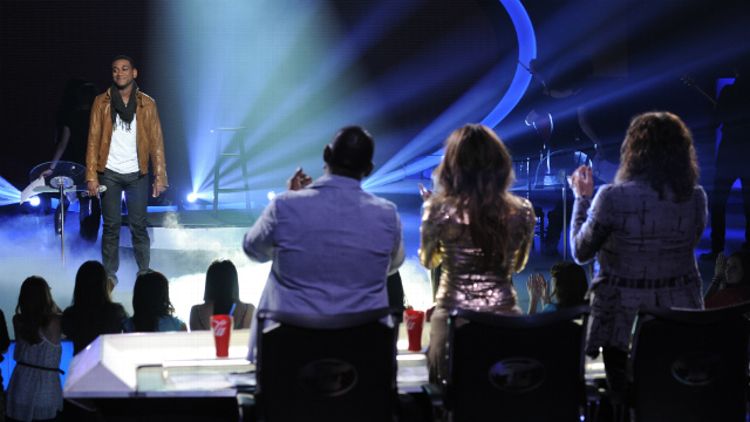 All season long, Grantland Idol experts Mark Lisanti and Jay Caspian Kang will answer five very important questions after each performance episode. The end is so near they can taste it, and it tastes like a puppy’s tears.

Good lord. Mega-SMH. What did you think of Queen Night?

Kang: Just when I was starting to get into Skylar, Jessica, and Joshua, just when I was starting to enjoy hate-watching Phillip Phillips, just when I had gathered up enough mana to play my “Circle of Protection: White” Magic: The Gathering card to ward off the evil witchery of Elise Testone, the show had to go and defile the greatest rock singer of all time. We’ve been talking all season about singers you shouldn’t cover — Chaka Khan, Sam Cooke, Whitney Houston, 4 Non Blondes, The Cranberries, etc. Let’s please add Freddie Mercury to that list. There was no reason to listen to Phil Squared sing “Fat Bottomed Girls,” there was no reason to have Hollie Cavanagh sing “Save Me” (from what? A spoonful of medicine?) and there was certainly no reason to project four Jessica Sanchez heads onto the screen and have her sing “Bohemian Rhapsody.” Usually there’s something funny about watching a teenager try to karaoke his or her way through great songs sung by great singers. Last night was just kind of sad.

Lisanti: Queen Night was an utter disaster, and would have been worse than Billy Joel Night (which itself was so terrible it set off three days of rioting in Long Island; there’s a piano factory in Levittown that’s still smoldering) if they hadn’t made the choice to abandon it halfway through. Luckily, Brian May came to his senses at the last minute and refused to participate in the exhumation of Freddie Mercury and the ritualistic shaving of his mustache, scuttling the “Desecration of a Legend Presented by Ford” segment and forcing the producers to pivot to Phillip Phillips’s “Fat Bottomed Girls” without a rehearsal.

To the show’s credit, the opening medley perfectly set the stage for the musical abortion that was to follow. From the first few notes of that group performance, it was clear we’d be treated to an evening of kids flailing through the works of an all-time great band with whom the contestants had only the most passing familiarly. (Except for Elise Testone; she opened for Queen at the Garden in 1985 after she replaced Sammy Hagar in Montrose.)

Who was your favorite last night?

Lisanti: Will there ever be another week where the answer isn’t J-Chez? She’s operating on a level so far above the other contestants that the primary entertainment value is in watching her lay waste to her amateur competition. In truth, her best performance was probably during the opening medley; while everyone else yelped their off-key way through the group number, she nailed every brief solo she had. (Joshua Ledet was particularly helpless in the medley, like the Devil came, took possession of Ryan Seacrest — this would explain Seacrest’s illness — and trapped him inside a Jock Jams compilation.) Now go ahead and tell me about how Skylar might win everything.

Kang: I had this revelation last night about Skylar. She’s not the best because she has “country soul” or because she’s “authentic.” She’s actually the best because she’s so polished and professional that she can make herself sound authentically country. That’s the level that J-Chez hasn’t quite gotten to yet (and who can blame her? She’s 16). I agree that J-Chez is the most vocally gifted contestant they’ve ever had on the show. She’s the only Idol contestant who will go directly into the DivaRank Top Five. She’s effing crazily talented. But as I was watching Randy say nothing again last night, I began to really miss Simon and wondered what he would say about Jessica Sanchez. And I think what he’d say would be something like, “Jessica. You are undeniably and unbelievably gifted. But there’s something a bit too precocious for me. It’s not like you’re really singing the song as much as you’re brilliantly imitating a brilliant singer singing the song.”

He’d be right, as always. Skylar’s the only one who makes me feel emotions anymore. She’s my girlfriend with the cutting problem.

After watching the little happy moments where the Idol contestants dished about their competitors, did your opinion of any of them change?

Kang: I really hope they’re sending Elise home because that intro was pretty brutal. Phillip called her a bad singer, everyone else just flat-out called her annoying and “weird” and Skylar even noted that Elise does a budget version of Mariah Carey’s hand motions. But unlike Mariah, who does this because she wants to point out just how awesomely she hit the notes in her run, Elise just kind of mushes everything together and does these hand motions like she dropped her iPhone in the toilet and needs to fish it out without brushing her hand against floating turds. I don’t really need to have the curtain pulled on Idol. What was the point of showing everyone in America that the contestants were bratty, bitchy, mean little snits, i.e., exactly what we assumed they were? I prefer to think of Joshua Ledet as someone who was gifted to the world of gospel by a kind God. I don’t need to know that he’s the annoying musical theater kid from high school who talks shit behind everyone’s back and won’t stop singing stupid show tunes in class.

On another note, I think the producers know the show isn’t going to be on for too much longer and are throwing out every single practical joke they’ve been saving up for the past 10 years. Did you see what Hollie Cavanagh was wearing last night? First, she shows up in a red lounge suit and this gaudy frosted glass necklace, looking like Carole King at a cocaine party on James Taylor’s boat in 1978. Then they put her into some sort of weird gold-and-black breastplate contraption and have her butcher Miley Cyrus. You can’t tell me that this isn’t on purpose.

Lisanti: I kind of liked those intro pieces; we’re down to the wire now, and it’s a smart move to give the contestants a forum to trash-talk each other. The psychological game is still part of the game. You saw all the built-up animosities come out, even if they tried to make it seem like they were just good-naturedly goofing on each other: the lingering complaints about Elise’s hand jabs, J-Chez’s intimidating talent, Hollie’s inscrutable accent, Phillip’s suffocating patchouli-stink, Joshua’s precious tendency to cut his lines with a Sam Cooke .45, and Skylar’s room full of skinned sqwirls were all dragged out into the sunlight for public disinfection. I wouldn’t be at all surprised to find out that “someone” took a dump in the sound hole of Phillip’s guitar to retaliate for all his aloof, dickish remarks in that segment. (Where “someone” is Tommy Hilfiger, who’s still incensed PP2 rejected all his styling advice earlier in the season.)

Phil Squared just straight up sang a Dave Matthews song. Did you finally throw your remote through your television? Did you kick your dog in the kidneys?

Lisanti: I don’t know what you’re talking about. I found that particular combination of performer and material to be a delightful match, and the song was a delightful CAN YOU FUCKING BELIEVE HE SANG A DAVE MATTHEWS SONG? HE OBVIOUSLY READS OUR IDOL BLOG AND IS TRYING TO DESTROY ME. AND THEN RANDY CALLS HIM A “TRUE ARTIST” FOR A PERFECT NOTE-FOR-NOTE IMPERSONATION? THEY EVEN BROUGHT OUT A FIDDLE PLAYER!!!!!!!!! THERE IS NO GOD. WAIT, THERE IS A GOD, AND HE IS HILARIOUS.

Strategically, though, it was an interesting move. Declaring, “Fuck all y’all, I have no musical ambition beyond my eventual career fronting Matthew Matthews, the world’s greatest tribute band, please catch us on our worldwide tour of every Applebee’s in suburban Virginia” this late in the competition is a bold gambit. He seems to know he’s going to win this whole thing by 16 million votes.

My dog ran out of the room halfway into that all-caps section, btw. But Siri did a pretty good job transcribing it considering all the sledgehammer-violence background noise.

Kang: I’m going to ride shotgun on your P-Squared hate train. Look, if you’re going to sing a Dave Matthews song, why not “Ants Marching”? Or “Satellite”? Or maybe even “What Would You Say”? Cater to the thirtysomething bloggers who hate you, Phillip. At least remind us of the pretty cross-country girls in our pre-calculus class who would wear DMB shirts with that stupid dancing flame thing on the back? Why would you sing that DMB song? We’re all getting old and depressed here. As long as you’re going to force us to watch your schlock week after week after week, can’t you remind us of our youth? Why are you such a dickhead, Phillip Phillips?

Who is going home tonight?

Kang: Frank Testone and her juice machine will stay another week. In a shocking result, Joshua Ledet will be sent home. And it might be about time for that anyway. Look, I wrote 1,500 words earlier this season about how Joshua Ledet had the potential to be the greatest contestant ever, but he’s got the same problem as Jessica Sanchez. He’s 19 years old. His emotions are brilliantly orchestrated affectations. He sort of leans on the same vocal tricks every week. And yes, he does these things brilliantly, but he’s losing steam as the show has gone on.

Lisanti: Here’s my shocker: J-Chez is out. It’s right about time for some completely insane twist of Idol fate. And it would probably be the best thing for her; she clearly has nothing else to gain by staying on the JV team. Let Jimmy Iovine get her career started.

Bottom Three: Joshua Ledet, J-Chez, and Elise. Set it and forget it.*

[*I hope no one has this catchphrase yet. I think it’s a winner.]