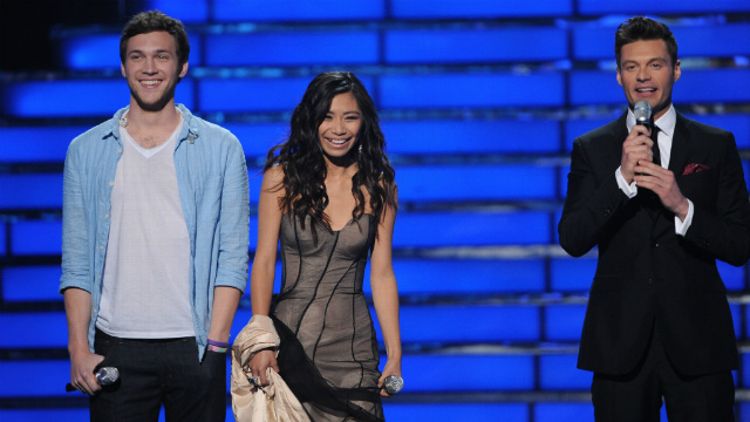 Let’s start off with an easy one: Who do you think was better last night?

Kang: If I had put money on Jessica Sanchez and if I were some sort of head of state or governor, I would be filing all sorts of paperwork right now to start a point-shaving investigation. Nothing about Jessica’s performances made any sense — why start with a predictable Whitney song, follow it up with another song that nobody’s ever heard, then end the night with a born-again-y anthem that’s so soft and bland that it makes “A Moment Like This” sound like The Coup? On a night when she was supposed to form into a monster robot and avenge the deaths of Etta, Whitney, and Donna Summer by hacking at Phillip Phillips with that giant electric sword, Diva Voltron just kind of flounced around, looked real constipated, and arguably put out her worst three performances of the season.

Here’s my theory: The producers know that a cute white guy wins the show every year and that this isn’t particularly good for the show. So, instead of having another year where the cute white dude beats out the massively talented non-white-guy (We’ll call it the DeWyze Problem), they paid Jessica to take a dive. Phillip was going to win anyway, so why not try to make it look like he deserved it?

Lisanti: I’m not sure I follow the logic of that theory — it’s like paying the Washington Generals to lose to the Globetrotters by 100; if the outcome’s preordained, why go through the trouble of making the fix obvious and removing some of the entertainment value? Though maybe there’s a grain of truth in the idea; that sequence where Randy Jackson chased Phillip around the stage with a bucket of confetti screaming, “I’m gonna soak you so bad, dawg! A million billion percent damp, yo!” was a little conspicuous. (Ryan Seacrest did a great job selling his fear that his pancake makeup was about to get smeared when Phillip dodged the “water” at the last second; he’s a pro’s pro to the very end.)

It’s hard to explain what happened to Jessica. Wait, no it isn’t: Her song choices were shockingly terrible. She even seemed to realize that fatal miscalculation, apologizing and promising that if she ever gets to do an album, she’d “urban it up” or whatever weirdly articulated thing Randy suggested. Her “I Got Nothing” was very good, but predictable, the kind of thing she’d been effortlessly slaying all season with her patented, Voltronian precision. But those other two songs? Yikes. I never thought I’d be living in a world where my beloved J-Chez could lose the finale based on performance, but here we are, gaping at a blood-red sky, watching flaming, skeletal birds spelling out END OF DAYS in their formation as they migrate toward the Nokia Theatre. I’ve been leaning on the apocalyptic imagery pretty hard these last two weeks; I think I’m ready to crown our latest Nonthreatening Idol Boyfriend and be finally done with this.

Did your opinion of Phillip Phillips change at all last night?

Lisanti: “Changed my opinion” might be a little too strong, but I will give you this: I did NOT see this last-minute “Mumford and Phils” pivot coming. That show-ending Phleet Phillips single was actually credible. Could our musical nemesis have a future beyond the Dave Matthews cover band fate he seemed thrilled to fall into by making every. Single. Song. A. DMB. Cover? All credit to Jimmy Iovine. The man’s a genius. (My definition of “genius” is apparently now “can get Phillip Phillips to sing a song that doesn’t make me want to destroy my television with an acoustic guitar.” Strange times.)

Kang: I also enjoyed The Dave Mumford Band! Phillip saved the best for last like Vanessa Williams and ended the show with his two best performances of the season. I think I’ve gone from “I’m never watching this show again because that cute little asshat is going to win” to “Maybe I’ll watch next season because he wasn’t that bad.” That’s some traction, I guess.

Was this the inevitable finale?

Kang:Credit where credit is due, Lisanti. You called this from the days of the Top 24 and held steady while I was off championing Skylar Laine and Joshua Ledet. Honestly, I think Jessica kind of crawled across the finish line — since getting booted and then saved, she sort of shrank up and stopped taking risks. Every performance was some soul/R&B standard she had probably sung a thousand times before. The first time we really saw Jessica Sanchez onstage was when she got loose with DeAndre Brackensick on an upbeat version of Linda Ronstadt’s “I Guess It Doesn’t Matter Anymore.” That girl had fucked-up hair, blasted out all the blasty notes, and growled when it was necessary. Since then, Jessica has been workshopped to death. (Go MFA debt!) Her personality, even onstage, was drained away. The growl was softened, and what you had at the end was a Celine Dion impostor who was doing a very bad Celine Dion impression. I still believe in Jessica Sanchez, but she needs to find herself a 23-year-old producer with a massive cocaine problem.

As for Phillip Phillips, we’ve discussed this to death. Of course he was going to win.

Lisanti: This season’s been so long that if you had told me I’d called for an Elise Testone vs. the AFLAC duck finale, I would have believed you and started apologizing for blowing the call. But I’ll take it, I CALLED IT. I feel no pride in that accomplishment; at least Elise and the duck would’ve represented the ability to be surprised by anything Idol could throw at us. (Phillip Phillips singing a song that didn’t fill me with uncontrollable rage notwithstanding, that was a sucker punch.) So tonight we play out the string, coronate our latest bland king, and wait for The X Factor to give our sad lives meaning again.

Also: I still believe in Jessica Sanchez, but she needs to find herself a massive cocaine problem.

Big news out of London this morning. Cheryl Cole is being discussed as one of the judges for next season. Thoughts?

Lisanti: I think that rumor’s already been debunked, but I’m up for anything. If they lose J.Lo, someone’s got to fill the Pretty Pretty Shiny Shiny slot, even if it’s someone who was fired from X Factor for having an impenetrable accent. She wouldn’t be any harder to understand than Randy, anyway.

Kang: If she’s not replacing Randy or Steven Tyler, it doesn’t really matter.

Should we do this again next year?

Kang: When I think about it in the abstract, I can conclude that I really do like Idol and should be happy to write about it. The show has given me so much. But this season, despite the high level of talent involved, felt particularly dispiriting. I don’t think it was the Phillip Phillips death march and the inevitability of his coronation or Jessica blowing a tire and sort of rolling herself across the finish line. I thought about it for awhile this morning and I realized that I haven’t watched a single judging reaction this entire season. I typically watch Idol in about 15 minutes and have never really felt it necessary to stop and listen to what Randy has to say about anything. The awfulness of two-thirds of the judging panel puts too much pressure on the contestants. Compounding the problem is the fact that the Idol talent pool has become as depleted and picked-through as a Goodwill in West Hollywood. The show is now just a lot of blabbering and compliments and 16-year-olds who have been training to be on Idol since the age of 8. Who really wants to watch that?

Lisanti: Sure, why not, what are we going to do, spend countless hours between January and May trying to accomplish something that actually adds positive value to the world? LOLOLOL. Good one, Kang-bro. Hey, don’t leave your desk for a few minutes, I just have to arm this vest so we can complete the murder-suicide pact we signed after the third week of audition shows. No backsies!

[Ed. note: Tune in tomorrow for our American Idol Finale Results and Season Wrap-Up Podcast! No, really, we’re doing that!]