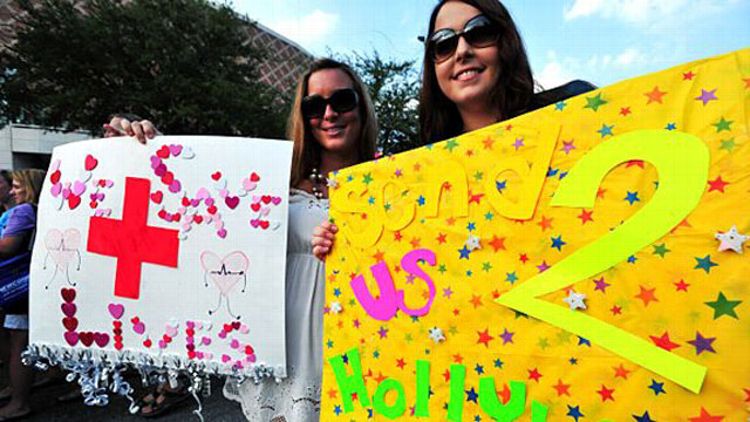 Jay Caspian Kang has pledged to write about American Idol until the producers at Fox agree to sign a Jacob Lusk provision that would allow Young Luther to appear on every season of the show, from here until eternity.

Mark Lisanti is the editor of Hollywood Prospectus and has been a professional Idol pundit for the past 25 years. He hasn’t missed a minute of the competition since its world-changing debut, if you discount the scores of soul-crushing results-show hours skipped via DVR.

This season, they’ll answer five very important questions after each episode. (No, not including the results shows. Pay attention.) Today, they warm up for the grueling task ahead with a quick preview of what’s to come in Season 11.

Lisanti: Let’s see … Steven Tyler killed the part of his frontal lobe responsible for critical thinking by snorting a line of pure Clorox out of a 17-year-old groupie’s navel backstage at the Boston Garden in ‘75 (totally worth it). Jennifer Lopez seems to have established herself as something of an UltraPaula (nurturing and positive, yet shockingly barbiturate-free), so her capacity for real criticism is probably limited. I guess that leaves Randy, if he can maybe shut off the inner monologue that’s constantly inventing new, impossibly large imaginary numbers and concentrate on an actual performance long enough to critique it. Yeah, we’re gonna need a fourth judge again.

Kang: Agreed. I’d open up an Internet vote that would let America choose the next judge from the following ten contenders: Kara DioGuardi, Floyd Mayweather, Pink, R. Kelly, Joan Rivers, Michael Kors, Quentin Tarantino, Whitney Houston, Charles Barkley, and Chevy Chase. Each judge would get to sit in on one of the audition rounds. During Hollywood Week, America would vote for who they wanted to have sit in the fourth chair. Personally, I’d vote for Kara because I think she’d realize this was her last chance at staying in the spotlight and go HAM on the contestants. She could wear all black leather, tease out her hair, and say subtly racist things to the other judges, like, “Jenny, maybe we’ll listen to you during Gloria Estefan Week, but you have no idea how Avril’s supposed to be sung.” She could also constantly refer to J.Lo as “Selena,” and Randy as “Fat L.A. Reid.” In Week 7 of the finals, she could have a “breaking the fourth wall” moment and scream at a producer, “Sally, if you don’t stop waving that fucking towel to get me to hurry up and finish my critique, I’m going to give your husband what he wants from me.” You can never go wrong with putting someone on TV who has nothing to lose.

Now that the halo effect of the new judges has worn off, and after X-Factor (and, to a much, much lesser extent, The Voice; Adam Levine, hi!) seemed to steal so much of Idol’s thunder, what should the prime-time karaoke flagship rip off from its rivals to give itself a much-needed kick in the ass?

Kang: They need to institute some sort of “Sing for Your Life” element from X Factor and stop moving everyone around on those goddamn chairs all the time. That would instill some drama and help liven up Thursday nights. I’ve fast-forwarded through every results show since the dawn of DVR. And please stop making us watch the Idol contestants do music videos featuring American cars. I’ve always thought they should have gone with the whole Vote for the Worst campaign and instituted weeks in which America could vote for who they wanted kicked off the show. These “Vote for the Worst” weeks would tell us more about America than any ethnographic or sociological study — when you have the power to exercise your deepest prejudices via text message, who pays the price?

Lisanti: They absolutely must top The Voice in judging-chair technology or risk becoming the laughingstock of televised singing competitions. Maybe they can get some thrones made of swords, or from the bones of past winners who’ve lost recording contracts. Failing that, the “Sing for Your Life” thing would be compelling. But they’d try harder if Randy were squatting on petrified chunks of Taylor Hicks’ skeleton.

If you could construct the ultimate Idol (i.e., one with the best chances of winning the whole thing and launching him- or herself into that coveted 50/50 chance at up to three productive years in the recording industry), what would he/she look like?

Lisanti: Female. 21. Attractive, but not threatening-to-a-12-year-old-girl attractive. Talented, but not I’d-actually-ever-buy-one-of-her-albums talented. She’s never listened to a country record in her life, but by Week 9 she’s doing her third Carrie Underwood song and always performs with at least one fiddle player present. By week 12 you swear she’s just gotten new veneers. And are her breasts getting bigger? Strange. Her name is probably Codi. You know what? Her first single is kind of good, and no, I’m not ashamed you just saw it’s in my iTunes library with four stars next to it.

Kang: Female. 23, with a cute kid whose father is never mentioned on the show. Ethnically ambiguous. Slightly overweight with messed-up teeth like Jewel. She plays the role of the Idol outsider: She spent years singing in coffee shops and bars, but the A&R assholes of the recording industry always told her she just didn’t look the part. Has a voice that can go to eleven, but still sounds nice when she’s singing “Landslide.” In Week 5, she makes a poor decision and takes on Chaka Khan, but rebounds in Week 6 with her sultry, slowed-down, gospel rendition of K-Ci and Jojo’s “All My Life.” In Week 7, she takes the R&B gimmick too far and completely bombs her attempt at “Ignition: Remix.” She recovers by singing a shaky version of “The Weight” in Week 8, but then blows up in Week 9 when she takes on Cheryl Crow’s “Strong Enough” and emerges victorious. In Week 10, she seals the win with “Purple Rain.” Her name would be Fantasia Bowersox.

Which washed-up, drain-circling music personality is destined for the judging table next, following (a) the producers’ desire to shoehorn in a fourth warm body again, or (b) Randy finally getting shitcanned, as has seemingly been threatened since five episodes into Season 1?

Kang: The last YouTube Hall of Fame got me thinking that Scott Stapp from Creed would probably end up as the next Idol judge. He’s got the album sales, the pipes, and probably still plays well in the red states. He’s also polarizing [INSERT TEBOW REFERENCE] and doesn’t seem like the nicest guy. During one of the results shows, he could take the stage to sing a remix of “St. Elmo’s Fire” featuring Kreayshawn. Afterwards, as the studio audience cowered in fear, Scott Stapp would thank God. Then [TEBOW REFERENCE] would walk onto the stage in full Broncos gear and throw a football through Scott Stapp’s head. The Rapture ensues?

If this were two years from now, I’d vote for Lady Gaga.

Lisanti: A thing the show’s really lacking is that behind-the-scenes, backstage-drama-producing reality show element, so I’d install a bone-throne (note: callback, not sexual innuendo) for Marc Anthony, whom J.Lo jettisoned from her life the precise moment her suddenly resurgent career could benefit from Us Weekly spreads of lunch dates with Bradley Cooper. (Seriously, it was like the reps who’d spent the last eight years steering her career into an iceberg suddenly woke up from their Inception dream, seized the moment, and had Anthony’s things packed and waiting at the curb during his Idol coaching cameo last year.) We could put him on the other side of Randy, where the camera could catch him trying to steal poignant, longing looks at the radiantly untouchable mother of his children. “What are you looking at, Enrique?” she’d answer, cruelly, indifferent to the single tear rolling down his cheek. “Rough stuff, dawg. Rough stuff,” Randy will answer, offering up a compassionate fist-pound and a reassuring whisper. “She knows your name, bro. Probably.”

If this were six months from now, I’d vote for Lana Del Rey.

Just for fun (make no mistake, the rest of this is very serious work), how about three predictions for Steven Tyler’s upcoming season?

Lisanti: (1) He refers to at least one teenage female contestant as “an underbaked slice of sweet cherry pie” and invites her to “cool on my windowsill for a year or two.” (2) During Elvis Week, wears a Native American headdress adorned with four-foot, tie-dyed crow feathers because he swears that’s what The King’s ghost always parties in. (3) Tries to use the Judges’ Save to bring back Robbie Rosen from Season 10 just so they can sing a duet of “I Don’t Wanna Miss a Thing,” demanding that it pour “like cats and dogs, blood and frogs” in the studio during the song’s emotional crescendo.

Kang: (1) He refers to his days as the lead singer of Queen. (2) He reveals the details of his steamy relationship with the ghost of Alicia Silverstone. (3) He converts to Islam and goes by the name of Mahmoud Abdul-Rauf.