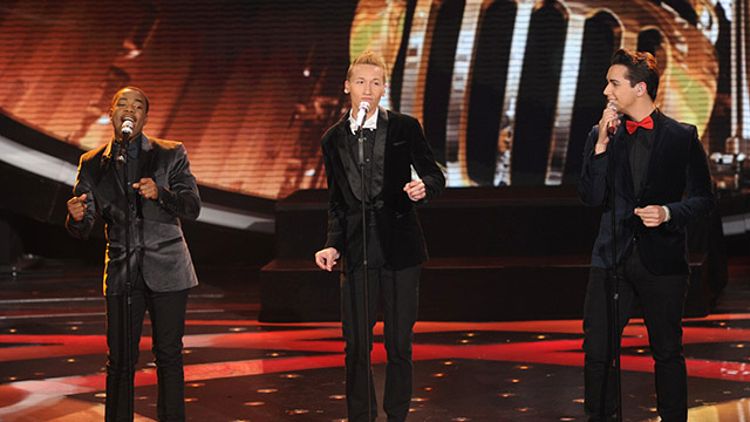 Whatever doesn’t deafen you makes you stronger: Grantland’s Jay Caspian Kang, Mark Lisanti, and Emily Yoshida have returned, bowed but not broken, to tackle another season of American Idol. There are eight contestants and three recappers left. These numbers will change.

So, we didn’t get Motown Week this season. We got “Detroit Week.” Which was basically Motown Week with a really bad Madonna duet thrown in for good measure. Quick, name one theme that would have been better than this that Idol hasn’t done yet.

Kang: Nick Cave’s Murder Ballad Week. Devin Velez and Angie Miller could have done their version of “Where the Wild Roses Grow.”

I’ve been receiving some criticism in recent weeks for fast-forwarding through large portions of the show and not living up to my billing as an “American Idol expert.” Ladies and gentlemen of the jury, in my defense, I present to you this week’s episode, which was so awful that I considered enrolling in an adult education class at Pasadena City College that only met on Wednesday nights between 8 and 10 p.m. Like maybe pottery. Or Forensic Criminology. Anything but watching Janelle Arthur lie about writing an arrangement of a Supremes song when she was 14 and then bleating out the exact same slowed-down, “blues-ified” garbage that some Idol producer has been writing ever since that hipster gave Paula Abdul’s “Straight Up” the same treatment.

Lisanti: Before we get into this, here’s Janelle Arthur’s “blues-ified garbage” performance of “You Keep Me Hanging On,” which, for better or for worse, was the best one of the night. Er … Exhibit A, ladies and gentlemen of the rhetorical-device jury:

You may now retire to the deliberation room, returning shortly with orders to send Jay Kang to his death. (I.e., 15 more seasons of Idol recapping, plus five seasons each of X Factor and America’s Got Talent. And one of Storage Wars, because the imaginary court is not without mercy.)

If we went to speculate about why Idol is trapped in a demographic death spiral and The Voice, as much as it disgusts me to recognize its Jetsons*-whirly-chair-powered existence, is eating its karaoke-flavored lunch, it’s “Detroit Week” and, depressingly, “Beatles Week.” Not too long ago, there was a universe in which Idol had to appeal to everyone in America. That universe is gone, but Idol continues to program itself the same way, ignoring the fact that the upper end of its audience has long ago died on the couch or can’t figure out how to make the people inside the CBS box sing “I Heard It Through the Grapevine” again.

What I guess I’m saying: “Taylor Swift and Bath Salts Week.” Bring it.

[*The Jetsons was a cartoon about the future that ran in the late 1930s, when I was a child.]

Yoshida: I watched the entire show last night without a single fast-forward. And while I feel very professional today, it may not have been the best call, because by the end I was combing YouTube trying to decide which Kid Rock song was most egregiously omitted and tweeting at Astrologer to the Stars Susan Miller for insight into what last night’s #MonsterMoon may have had to do with the proceedings. Then this happened, and I had to go into the other room and cry.

@emilyyoshidafor those of us who did not see American Idol and Detroit Week, tell us what happened. You are culture editor!

Whatever, just make them all do high-dives and call it a night.

Angie revealed that she had been in a high school production of My Fair Lady, then tried to reveal her sassy side and underwhelmed the judges in the process. How many weeks until she goes home?

Kang: At least four weeks. They have to castrate all the boys and lock them up in some small church in the Italian countryside with all the other castratos of singing competitions past. Colton Dixon lives there. Kevin Covais runs the gift shop.

Did you see that weird floaty infographic Fox put up last night that showed that “Idol Country,” which I imagine is kind of like Kid Nation, but with a lower average reading level, was by far the most popular of the Idol genres, followed by Idol Pop, Idol RandB and Idol Rock? By that logic, the final three are going to be Janelle Arthur, Kree Harrison, and Angie Miller. That’s like watching a panda and a koala sing onstage with a rag doll at the saddest Chuck E. Cheese’s on all of Long Island.

Yoshida: I did see that infographic — I watched the entire show last night without a single fast-forward, remember — but it’s important to consider that there is a specific kind of Idol viewer who will go online and vote for what “Idol genre” they like best when the TV tells them to, and that Idol viewer probably does not represent the voting population at large. I think there are Idol voters who experience the show primarily through their televisions, and those that experience it primarily through social media, and I think Angie’s fans are the latter, if her YouTube hit count is any indication. They’ll start to get more rabid when it looks like she’s at risk of falling; I doubt they’re voting with all their piano-fearing firepower just yet.

I do think it’s interesting that over the last few weeks Angie has come off as such a socially clueless theater nerd that at this point no tight dress or amount of heavy makeup could really threaten the tween demographic and turn them against her. Good job, Angie!

Lisanti: We live in a strange and frightening world when Nicki Minaj tells Angie Miller to stop trying to be hot and get back behind the piano. Why can’t she do both, Nicki? Can’t “piano hot” be a thing? Billy Joel does it. And Vanessa Carlton has never been more relevant. That being said, yeah, she’s safer behind the piano. Maybe they can get her a Lucite piano so we can see whatever Body Glove dress the stylists paint onto her.

I also don’t know why we have to dump on Angie every week. She’s like Marnie from Girls crossbred with Miley Cyrus, and who doesn’t totally lurve both of those things?

Do the boys all hate each other?

Kang: No no no no. They all hate Lazaro. Which is fine. I hate Lazaro, too.

Lisanti: When Lazaro finishes singing he looks like Patrick Ewing at halftime. I can’t believe Ryan Seacrest stands next to him for three minutes and doesn’t offer the poor, drenched kid a sympathy squeegee. Ryan Seacrest clearly hates Lazaro.

We All Make Mistakes And We All Say Things We Wish We Could Take Back But, We’re All Humans

Getting invested in the American Idol Season 12 guys’ drama is like picking favorites at a salmon hatchery. That doesn’t mean there’s not a whole world of emotion brewing over the aftermath of last night’s group performance, culminating in some Twitter backlash that Burnell started self-loathingly RTing for some reason after the show. This is what happens when I watch this show all the way through, by the way. I start knowing what these kids are tweeting about. Nobody wants this life for me, do they?

Let’s talk about Mariah and her Sailor Moon wand real quick. How invested do you think she is in renewing her Idol contract?

Kang: Can we talk first about how Mariah just stole the whole “daaahhhling” and part-time British accent thing from Nicki Minaj, who has been putting on that act for the past five years? It’s one of the weirdest things I’ve ever seen — the lack of self-awareness to know that you’re WEARING THE SAME COLOR SHIRT and STEALING THE OTHER JUDGE’S BIT WHEN SHE’S SITTING RIGHT NEXT TO YOU shows you the depths of the Mariah Carey cocoon.

Lisanti: I’ve also started talking like Nicki, so maybe it isn’t my place to judge, maaaaaaaarshmallow.

While we’re talking about Nicki, because talking about Mariah is boring, this was the most insane thing she said on Wednesday, and it was to the flopsweating Lazaro: “Fonzie, you gave it to me tonight.” I will never clear my mind of the image of an exhausted, pink-wigged Henry Winkler rolling over in bed to high-five Nicki Minaj. Nor do I want to.

Yoshida: Now, you guys know whose side I’m on and that this changes nothing, but in all fairness, didn’t Nicki steal Mariah’s style? Compare what she wore during the auditions in the premiere to what she wore last night. I’m not sure how much this has to do with Idol and Mariah and how much it has to do with her recent bid for “realness,” but just sayin’, it’s not Mariah in the majorette hat this week, y’know?

Doesn’t matter, I think they’re both one-and-done anyway. Which is amazing, because “counting down the days till my contract is up” Nicki Minaj is still 10 times more engaging than “American Idol will single-handedly reboot my career” Jennifer Lopez.

Rank the performances and tell us who’s going home tonight.

Kang: [Abstained, found something better to do.]

I don’t know if I’ve mentioned this already, but I watched the entire show last night, and I couldn’t even remember what Kree, Devin, Lazaro, or Candice sang this morning. Lazaro still isn’t going home, unfortunately. The judges and Jimmy have pushed too hard to the side of “bullying” at this point for the pity votes to not carry him to at least fifth place. So farewell, Devin Velez. You sang better than Burnell, but there was no way you could open with the line “people say I’m the life of the party” with a straight face and expect to stay on for another week.

I would send Lazaro home. A qualified health-care professional needs to sponge him off, and he’s just not getting that kind of treatment from the Idol staff. It’s for his own good. Good luck and stay dry, young hero.

Jay Caspian Kang is writing a murder ballad about Keith Urban.
Emily Yoshida likes to troll infallible astrologers in her free time.
Mark Lisanti is still thinking about Fonzie in a pink wig.