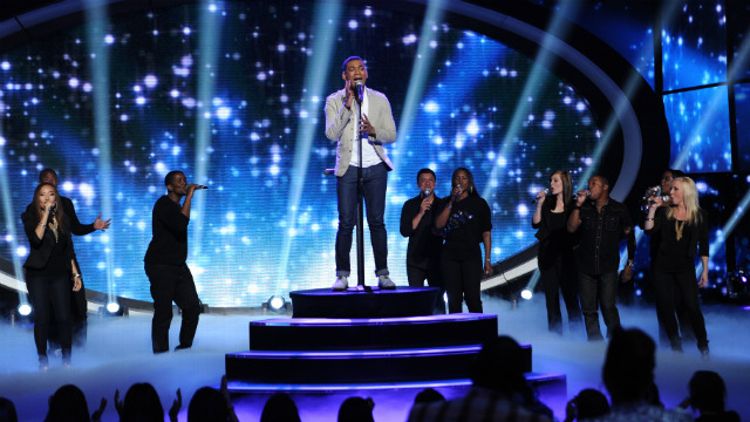 Last week, Kang said that he had realized that Joshua Ledet couldn’t “stank out an already stanky song” like “Change Gonna Come” or “Ain’t Too Proud to Beg,” but he could stank the hell out of a thoroughly unstanky song. After Joshua’s performance of “It’s a Man’s Man’s Man’s World” last night, does he want to reconsider that statement?

Kang: Well, he’s certainly not shy. Joshua has taken on David Ruffin, Sam Cooke, and James Brown. All he’s missing is some Teddy Pendergrass (probably won’t happen because nobody under the age of 40 knows any of his songs), Brian McKnight (impossible, given developments), Luther (probably coming), and Kells (PLEASE!) and he’ll have taken on the Mount Rushmore of male R&B.

Before last night, I admit to being a bit annoyed by Ledet’s ambition — he could get it to 9, but never quite make the stretch to 11. But with all his affectations and WHOAWHOAWHOAs, it always felt like Joshua Ledet was trying to convince you that he was doing some real shit, when what he was doing was just a Fantasia impersonation.

Last night’s performance changed everything. I don’t know if it was better than Fantasia’s “Summertime,” but it was certainly the best performance since Adam Lambert’s “Mad World,” and certainly cracked the five best performances in the show’s history. I mean, it wasn’t Pavarotti and James Brown banging out “It’s a Man’s World,” but it came about as close to that as Idol will ever come.

On an unrelated note, my problem with Idol this year is that it feels like everyone is doing some sort of impersonation. I understand this is like walking into a Renaissance Faire and asking, “Why does it smell like gonorrhea up in here?” but this year we have Mantasia (Joshua), some weird snow leopard queen (Hollie), Screechy Voltron Diva (Jessica), and the lead actor in Slaying Sorority Sluts: The Dave Matthews Story (Phillip Phillips).

Lisanti: I kind of love this new “Kang asks Kang a question about Kang, and Kang answers that Kang question” format. Why didn’t we try this 10 weeks ago? I could’ve slept in on so many Thursdays. When we do this next season (hey, Kang, we’re doing this next season!), we’re breaking it out during the audition round and I’m eating breakfast at IHOP those mornings.

In any case, I agree with the Kangquisitor that Kang was perhaps incorrect in his theory about Joshua’s inability to super-stankify the already stank-drenched. “It’s a Man’s Man’s Man’s World” comes out of the box at Stank Level Five, and Ledet somehow elevated it to the “Aretha Franklin singing at a memorial service inside a very crowded sauna” range. It was just amazing. (My e-mail to Kang during the show last night, reprinted in full: “Holy shit, Ledet!”) I’d go so far as to say it’s one of the two best Idol performances of all time, and no, I’m not going to tell you the other one, I’m going to remain mysteriously noncommittal. That song gave my goose bumps erections. That’s exactly as disgusting as it sounds, but you can’t control your body’s response to Art, you just have to go with it and hope your skin settles down before you have to answer the door for the Chi Dynasty delivery guy.

What was your least favorite Hollie Cavanagh performance from last night?

Lisanti: Oh, this one’s a layup: That awful duet of “Eternal Flame.” (Kids, “Eternal Flame” was the second- or third-biggest hit of an ’80s group called The Bangles. Google “Get Down Like an Ancient Sumarian” to explore more of their catalog.) I believe it was Randy who described it as “weird,” and he was wearing Don Draper’s dinner party jacket and a diamond brooch that said “YO!” On the whole, these new weekly duets have been awful; it’s like someone dynamited the dreaded group numbers and just scattered the resulting fetid, smoldering parts across the entire show. (God forbid they just allow it to come in under two hours instead of padding it with garbage.) I bet we’re not going to have this kind of nonsense on X-Factor. I miss Simon Cowell. Come back, Simon, and bring a sideshow train wreck with you for $16 million of rubbernecking value!

Kang: Agreed on “Eternal Flame.” And what a song to butcher! If Phillip Phillips and Joshua screech and growl their way through “Romeo and Juliet” by Dire Straits, an entire lame generation’s love songs will have been ruined. “Eternal Flame” was so bad that it made me wonder if Hollie, who knows she can’t win, was purposefully tanking to hurt Jessica’s stock in the competition. Maybe Hollie has some agreement with Phillip Phillips, where she takes out Jessica in return for an education in love? Don’t do it, Hollie! He might kind of look like a vampire, but he’ll call you dumb and go out drinking at night with his fiddle player and that hot, Mad Max saxophone player. Then, after you’ve pooped out his kid, he’ll tie you up with an extension cord and leave you in a trailer park in Arkansas, where nobody will understand your cries for “Heeep! Heeep!”

Do you ever think that Steven Tyler might be taking a dive in the name of rock and roll? Like maybe he’s being useless on purpose so that shows like Idol will stop dominating the pop charts? And once he’s put Idol into the cold, hard ground, he and Joe Perry will unite with Alicia Silverstone and bring back the boner-iffic era of Get a Grip?

Kang: Great question! Nothing else really makes sense, does it? Can you think of a more egregious example of mailing it in? Maybe Andy Rooney? Stanley Roberts? Anyway, I hope this is true because I still think Alicia’s got a few miles left on the odometer. When news broke that she chewed up food and regurgitated it into her baby’s mouth, wasn’t there part of you that remembered the “Crying” video and thought, “Man, I wish I was that baby?”

Lisanti: I’d probably buy a live Phillip Phillips recording where he does nothing but scat the 19-minute violin solo from “Ants Marching” on Live at Red Rocks before any post-Armageddon soundtrack Aerosmith record, so maybe this isn’t the most effective plan. Yeah, he’s been utterly useless as a judge and his continuing presence on the show is baffling, but he has provided some great moments. There was the early Season 10 jail-bait trolling, which was great fun until the Fox legal killjoys clamped an electronic monitoring device to his penis; there was that time when he made us look at his naked torso before he jumped in the pool; and just last night we had that five-minute interlude where J.Lo and Randy helped him detangle the vintage Nancy Wilson hair extension that got caught in the necklace he stole off The Guess Who’s tour bus during a sour peyote binge in ’79. He’s not been totally without value.

Oooh lord. Right after Ledet smashes “It’s a Man’s World,” Diva Voltron gets up on the stage to sing THE BIG JENNIFER SONG (Holliday and Hudson)? What’d you think of Diva Voltron’s performance?

Lisanti: Look, the knock on her has always been that she’s 16, she just doesn’t have the emotional reservoir from which to draw for the Big Moments in these songs, right? I have no idea if she spent the minutes before stepping onstage last night conjuring up that time in fourth grade that her social studies teacher made an example of her for turning in a late assignment, and her blubbering, humiliated run down the grammar school hallway to the safety of the girls’ bathroom, but whatever. That was some great shit right there. She’s not gonna out-Jennifer the Jennifers, and maybe she doesn’t have to. Maybe she’s finally starting to find her own voice in these late-season performances. That growl’s been coming out lately. Maybe that’s the J-Chez sound.

You probably hated it. Go ahead and tear up her homework in front of the class, you monster.

Kang: So the J-Chez sound is what my cat does when she gets nervous and starts trying to puke her food up through her nose? Ah, the perils of teen ambition. Now that we’re two years removed from Simon Cowell, the show’s contestants have been getting a bit bolder with their song choices. We’ve already discussed Joshua and the Titans of R&B, but his arrogance doesn’t even begin to measure up to Jessica, who has sung THE BIG WHITNEY SONG, THE BIG TINA SONG, and, now, THE BIG JENNIFERS SONG THAT EVERYONE SINGS ON SHOWTIME AT THE APOLLO. Look, I understand that you learn by imitating your heroes, but Jessica and her homework need to chill the fuck out. There’s no need to just sing the oldies station, Jessica. Why not try to youth-en yourself up and sing something a bit more age-appropriate? I’m sorry, but even if you were telling me that you weren’t going and that I was the best man you’d ever known and that there was no way you could ever gooooooo and that we were part of the same place and same time and that we both shared the same blood and the same mind and in time, in time, we’d had so much to shaaaaare, I’d just say, “This is highly inappropriate, Jessica. Please leave my classroom.” The reason why 16-year-olds sing songs about sitting on the bleachers and wearing sneakers is because that’s what they are supposed to sing about. Please stick with your frame of reference, Jessica.

Kang: Please let it be Hollie.

Lisanti: Please let Phillip Phillips accept Casey Abrams’s offer to leave the show immediately and start a jam band in Idyllwild. What was the question again?

Jay Caspian Kang spends at least 20 minutes per day shaking his fist at passing school buses.
Mark Lisanti has hypnotized you with his subtle repetitions of “Kang” and “stank.” Go forth and murder, his pretties!