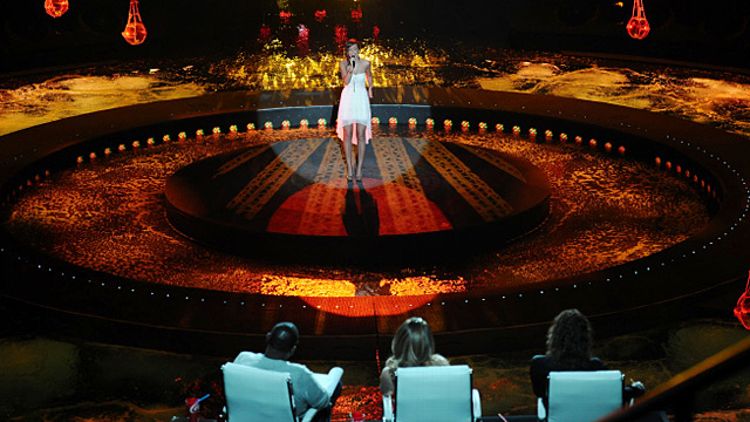 All season, Grantland Idol experts Jay Caspian Kang and Mark Lisanti will answer five very important questions after each performance episode. In their 500th installment of the series, dementia has set in, with Kang “going Woodward and Bernstein” and Lisanti “seeing lasers.” Pray for their souls.

The channel guide said, “The contestants must bring it and sing it in one final performance opportunity. So, who “brung it and sung it”?

Lisanti: There is only one sane answer to this question, and that answer is: “Jessica Sanchez both sanged it and branged it.” One almost feels betrayed by the way the season has played out so far (OK, that’s ridiculous on its face; American Idol is nothing but a series of delicious, delicious betrayals) in that we were only exposed to Sanchez in any real way during last week’s group performances, after what now even more acutely feels like four solid months of dicking around. And though she was great last week in that big talent reveal, she was “holy shit!” Wednesday night. Aside from the voice, it’s hard not to love her goal of supporting all of the 526 family members who traveled to Final Judgment Week with her, though she’s going to need to put up a Clarkson-level career to get that done. If she lands in the Fantasia range, there are a couple hundred cousins who aren’t going to get their Range Rovers.

Kang: She branged it, but she ain’t Fantasia. I can’t believe she’s 16, I loved her turn with D’Andre Brackensick, and I agree that she’s in a different class than the rest of the girls. But there’s something a bit too precocious about her and I don’t think it’s just a product of being a teenager. It’s more like watching Charlotte Church — yes, you appreciate the pyrotechnics and the approximation of stank/e-mo-tions, but you also just kind of wish she’d sing an Avril Lavigne song because at least that would be closer to honest.

In related news: Jessica Sanchez is the only Filipina in the competition, meaning she won’t have to split the crucial Pinoy vote. This is going to be important in keeping her alive through the chaotic semifinals.

Who was the most surprising inclusion in the Top 24?

Kang: That doofus with the glasses who tabbed himself as a starving artist. I can’t even be bothered to turn on the DVR and rewind back to figure out his name because he’s going to be axed in Week 1 of the semifinals. But to you, doofus in glasses, let me just say: curly hair and a nasal voice do not a Timberlake make. And nobody’s ever heard of your father’s heavy metal band.

Lisanti: This is the part where I tell you how excited I was when Creighton Fraker (the curly-haired, nasal-voiced doofus who looks like Timberlake is trying on an Elijah Wood skin-suit three sizes too tight) revealed his bio-dad was in Flotsam and Jetsam. Yes, I’ve heard of them. I suppose you’re not familiar with one Jason Newsted of Metallica? He was the F&J bassist before Cliff Burton’s tragic death created an opening in the band. (And now I pause to cue up “Anesthesia: Pulling Teeth” on YouTube and have a quick cry. OK, done now.) Sorry, I was a teenage metalhead.

This is also the part where I lose my shit a little about Phil Phillips Jr. advancing. Yes, I guess we saw it coming, but what made me crap my pants with outrage was when Randy told him, “You’re so unique and so different.” So, on Planet RJ, Dave Matthews doesn’t exist, apparently. It was doubly trouser-poopingly maddening that this comment followed a minute of Phil Squared highlights in which he mimicked every single Matthews tic, from the foot-stomp to the growl to the head-twist-and-eyebrow-lift combo. The only DMB moves he HASN’T copied are “stepping back to enjoy a 15-minute fiddle solo” and “tour bus dumping 800 pounds of human filth off a bridge and onto some tourists.” But he’ll get there eventually. He still needs time to develop as an artist.

Who was the most shocking dismissal?

Lisanti: I’d been thinking that calling this “Final Judgment Week” overstated the import of the moment, but then I watched Lauren Gray step out onto Sing For Your Life Island, surrounded by the dancing array of white-hot laser beams boiling the churning waters of Desperation Moat, and belt out her closing musical argument before an unimpressed Idol Tribunal. Within moments I knew how aptly the Final Judgment had been named, as the judges frowned, expressed their dismay at the lackluster performance of The One They Had Championed As The Next Underwood, and, with a signaling twitch of J.Lo’s finger, called down a lightning storm from the heavens that struck Gray dead on the spot. All is not lost, however, as the fallen Idol was wheelbarrowed directly to the set of The Voice, where Carson Daly is already preparing her still-smoldering corpse for one of their patented “second chance” auditions.

Kang: We’re agreeing too much today, which makes me think you doctored these questions to inspire more harmony around the office so I’d keep offering you the candy I’ve hoarded in my file cabinet. But yes — Lauren Gray should’ve stayed around, especially given that they kept three or four other completely forgettable girls. Honestly, I’m trying to remember their names or the songs they sang or their voices and I’m coming up with absolutely nothing. And hey, Idol, I don’t get upset about “water cooler talk” when you cut someone unexpected. Why did you let us get to know Haley from Utah during audition week and then never show her again? Why did you cut Johnny Keyser? Why did you cut Jairon Jackson? And for what dull, useless war are you gathering this top 24? I’ve never been less excited for an Idol season in my life. At least the Blake Lewis season had Sanjaya on it. When Jessica Sanchez gets eliminated in eighth place and Joshua Ledet follows a week later, I might finally quit this stupid, massive beast.

Our relationship with Heejun Han has been quite complicated thus far. Where do we stand on him following his teary induction into the Top 24 by a swooning judges’ panel?

Kang: I talked to Michael Kang, Heejun “Dante” Han’s director in West 32nd, who assured me that Heejun’s act is, in fact, not an act. #reporting. Over e-mail, Kang said, “What you see is what you get. That kid was a born entertainer. When he auditioned for me for West 32nd, he blew everyone else out of the water by just being so balls out.” Kang also cited Han’s “good heart.” This Kang agrees — Heejun might be hamming it up a bit and the modesty feels a bit false, but that montage that showed him at work got me all verklempt. His performance on that gushy weird lava island was his best of the competition. I think he could do as well as the Top 5.

Lisanti: Showing that he works with special-needs kids was an especially effective and moving “character reveal,” but the kind of thing they usually burn through in the audition round, so it was even more surprising to see it appear this late in the game. (Maybe this was because Lauren Mink claimed the “special-needs teacher” story in Week 1.) His performance was great. I’m all in on Heejun. I’d love it if he made it to the Top 5, but I have a sinking feeling he’ll be jettisoned well before that due to Idol voters’ amazing knack for weeding out anyone interesting four rounds too early.

Can you compose the perfect Randy Jackson Final Judgment Fake-Out?

Lisanti: “Sit down, dawg … nah, maybe stand up. Standing’s better for when you have to get some hard news. Then again, maybe you should sit down, we don’t want you falling over and drowning in the moat. Sit. Yeah, sit. Now you know that the talent is better than ever this year. There’s so much talent, bro. We like you, but … we just can’t put everyone through. It’s always so hard to make these final cuts. Twenty-four’s not a lot of people. It’s a small number. I wish it were the Top Two Hundred Billion Trillion Million; then we could keep you and everyone around, but it doesn’t work that way. Hard choices, dog. Stand up, but maybe hold the back of the chair for support; things are gonna get wobbly in a second. So … we like you, you know we like everything you’ve done so far, but that last song … we’re looking at the whole body of work. We’re all talking, deciding, and it isn’t easy. What I’m trying to say here is [ROLL FINAL CREDITS/RUN BULLSHIT TEASER FOR TOMORROW NIGHT’S SHOW/THROW BRICK THROUGH TELEVISION]”

Jay Caspian Kang did some #reporting in this one.
Mark Lisanti is now browsing Flotsam and Jetsam albums on Spotify.

Rihanna and Chris Brown's Secret Year of Hookups ... and Other Horror Stories From This Week's Tabloids