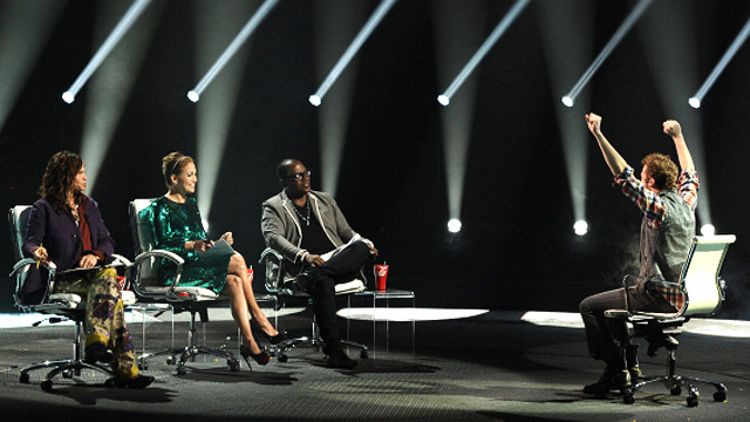 All season, Grantland Idol experts Mark Lisanti and Jay Caspian Kang will answer five very important questions about each performance episode. This is their journey, their struggle, and, quite honestly, all they’ve really got going on.

OK, let’s start by addressing the elephant in the room. How did you feel about the judge’s decision to let the Pubescent Castrato Singing Machine (Eben Frankewicz) into the competition over David “Mr. Steal Yo Girl” Leathers?

Lisanti: I feel nothing. Who can feel anymore in a world where the next Michael Jackson (insane hyperbole alert!) is passed over in favor of the next David Archuleta (uncomfortable accuracy alert!)? I don’t see a path to stardom for Frankewicz. Once his voice changes, he’ll be panhandling in front of the Hollywood and Highland Center as “Near Bieber,” taking $5 Polaroids and $7 “Baby, Baby” requests from tourists who don’t even realize he’s been vomited out half-digested by the Idol Machine. Leathers will be back, hopefully after having spent a year workshopping a new nickname.

Kang: I do think the nickname hurt. It’s hard to take a 4-foot-9 kid seriously when he calls himself “Steal Yo Girl.” It’s too bad, because his actual name, David Leathers Jr., was pretty cool. But I was surprisingly unmoved by his dismissal. Honestly, between Idol, 30 Rock, Archer, Project Runway All-Stars, and repeats of Storage Wars, my Thursday nights are getting a bit too much. Past hour two, I stop feeling emotions. Last week, I watched Archer, my favorite show on TV, without laughing. I think I need you to come to my house and occasionally cut me or slap me in the face with a cactus so I can laugh again.

We’ll do a mega-post next week handicapping the Top 24, but after just watching that awful annual zany dance montage where they introduce the singers, I noticed that I have no idea who about half the girls are. What’s up with that?

Kang: There are just so many somewhat attractive girls with Hollywood-ed hair who sing in very robotic, faux-meaningful ways: Brielle Von Hugel, Erika Van Pelt, Baylie Brown, Chelsea Sorrell, Haley Johnsen, Hollie Cavanagh, and Elise Testone are all the same person. And Hallie Day would be in there with them if she didn’t have the whole weird-makeup/Debbie Harry-dating-a-fat-guy thing going on. The only two distinguishable girls, really, are Jessica Sanchez (because she’s by far the best singer) and Skylar Laine (the only girl with personality). Also, how the fuck do you have an American singing contest without a black female singer?

Lisanti: There are only really two girls we need to be bothered with: J-chez and Shannon Magrane. (I’d like to be bothered with Baylie Brown and Haley Johnsen, but they’re not going anywhere in the competition.) So in a way, the producers have done us a huge favor by totally ignoring about 50 percent of the female part of the Top 24. You know who would’ve been great spazzing around in that stupid montage? Jessica Phillips. No idea how the judges didn’t pick her in Hollywood. Maybe they were too distracted trying to choose among the 400 blonde girls who passably sing country.

Between bespectacled teddy bear/ Gokeyish Adam Brock, Reed Grimm, Colton Dixon, Chase Likens, and the mob of unspectacular, generic girls, is this the whitest season of Idol ever?

Lisanti: As a white person, I am obligated to respond thusly: “Oh, are there a lot of white people this year? I don’t see color.” Let me pop over to the semifinalist page and have a quick look … Oh. Yeah. Super-white. Between Colton Dixon and Phil Phillips alone, it’s like the talent show finals at a performing-arts sleepaway camp in Aspen. Something’s not right. Incidentally, you notice how much this season sucks?

Kang: Yes. This season is awful. There’s one good girl, but she’s a pubescent singing machine. There are NO good storylines, no soulful voices, no Scott Savols. There’s not even someone to really hate from week to week. I mean, I guess I hate Eben Frankewicz, but how do you hate someone who will still be alive when Mount Rainier melts into the Pacific Ocean? How do you hate what will never die? I don’t even really believe in your Phillip Phillips hate and believe that you’re just displacing some anger at some girl who broke your heart in high school at a Dave Matthews concert. [Editor’s note: DMB was not famous until I was in college. SO THERE.]

Kang: If Jeremy Rosado, DeAndre Brackensick, and Joshua Ledet started a singing group, I’d bump them on repeat. Especially if I had creative control and could make them do an all-boy version of that TLC song about safe sex that isn’t “Waterfalls.” I also think they’d probably do a good version of “Brown Sugar” by D’Angelo and “I Can Sing a Rainbow” by the Dells, which I’m just going to embed here because everyone should have a moment of happiness this Friday morning.

Lisanti: As I said yesterday, I’m all in on Heejun Han. I’m down with J-Chez (watch me keep using that until it sticks) and up for Shannon Magrane. But these are the old-newsers. After tonight, it’s all about the Brackensicks. He dropped the falsetto off a cliff and rolled around in some deep-ass valleys. Range! So much range. He’s kind of like a Jason Castro who can sing and washes his hair. That probably discounts Jason Castro’s two most recognizable characteristics, but whatever. We need people to root for.

You have a choice between having to listen to J.Lo’s Fiat commercial song for exactly one hour a day or you can choose to listen to Randy Jackson consoling crushed contestants for exactly 45 minutes a day. You HAVE to choose one of the two. Which do you choose?

Lisanti: I’m not sure the torture ratios were properly calculated here, but I have to go with Randy’s consolations. It’s much, much closer to what we traditionally consider “singing” than whatever it is J.Lo does. BTW, did you notice how the insane Judgment Week light shows reflected off of Lopez’s green sequin dress and onto her face? She looked like a judge from The Matrix. Just when you think she can’t work the shiny thing any harder, she introduces us to an entire new shine-reality. She has to swallow a red pill and pick up a weird-ass old telephone to get into the dress. Still can’t sing, though.

NBC Comedy Recap: An Off-Its-Meds The Office Continues to Surprise