Five Questions on American Idol: A Second Chance With the Top 7 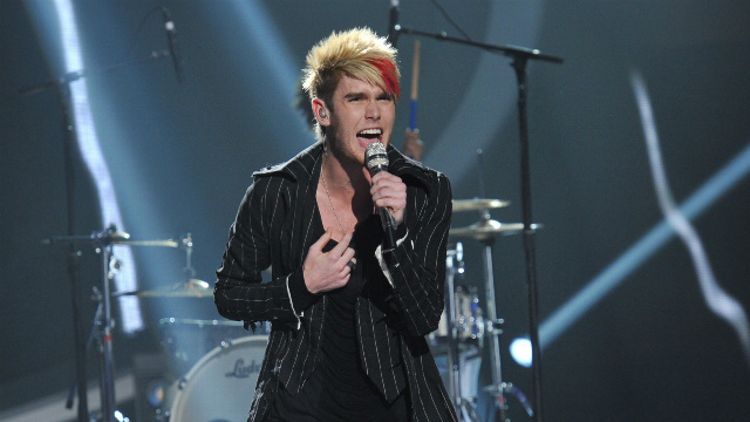 All season long, Grantland Idol experts Mark Lisanti and Jay Caspian Kang will answer five very important questions after each performance show. This week, they tackle the Top 7. Wait, the Top 7 was last week? And it’s Top 7 again? They really are in hell.

What the hell was going on with Colton Dixon’s hair last night?

Kang: For those who didn’t watch, Colton dyed a pinkish-red streak into his famous hair, which, prior to last night, looked like it had been sheared from the mane of a very Aryan Nation lion. I didn’t think much of the streak at first and assumed that Colty had lost his virginity, was feeling a bit vulnerable, and needed to express himself in his usual post-Avril, post–Hot Topic way. But then I got to wondering about his blood feud with Philip Phillips and his abusive relationship with Hollie Cavanagh. Was the streak some sort of blood trophy? Had he done something terrible to his less talented yet more singularly driven sister? Is there a body somewhere in Los Angeles with Colton’s DNA all over it?

I just wrote that question because I realized that we haven’t talked about Colton at all and there’s a chance he might win the whole shebang and hit the road with David Cook in the worst emo tour of all time. Why is he so boring? Why do I fast-forward through all of his performances? Who votes for him? Lisanti, please answer these questions and more.

Lisanti: I mean, OBVIOUSLY he died that bloody skunk streak into his bangs to color-coordinate with his sister, whom they dragged onstage yet again to remind her that she’s no longer a part of the competition, and that her brother, the one who wasn’t even going to audition, is now tantalizingly close to the finals. It was adorable seeing the two of them up there, like their newfound Wonder Twin power was the fashionable application of cherry Kool-Aid, with Schyler having to pretend she’s at all happy that Colton’s gone so far. But I have no idea who votes for them. The same people who buy 30 Seconds to Mars records? (I know I keep going back to that comparison, but it seems like his best-case scenario is post-acting Jared Leto, if Jordan Catalano were born again.) All I know is Colton’s really, really boring, like a virgin Marilyn Manson who’s afraid of the dark, and who dresses like 1978 David Bowie with a severe head wound.

Who was your favorite performer of the night?

Lisanti: I’m a little torn between Skylar’s “Born This Way” (but you’re going to pick that one, and hopefully you’ll hit on how hilariously subverted that song’s message becomes when it undergoes the country conversion; Lady Gaga probably threw a 10-inch Godzilla-claw heel at her TV) and Hollie’s “Rolling in the Deep” (but I was sick of that song three months ago). That leaves me with no choice but to fall back on J-Chez, whom I think has proven beyond any credible argument to the contrary that she’s the best contestant this show’s ever had. And she’s like only 50 percent of the way to having any clue how to perform. Her “Fallin'” prompted Randy to say something like this: “Alicia, holla at the dawg, that girl blew the box out of it!!!” I’d always thought the thing was “blew it out the box,” but in this case, J-Chez apparently reversed the musical polarity, found a box inside it, and then blew that box out of it. I just shit myself trying to make sense of those last two sentences. MY GURL IS IN IT TO WIN IT!!! (Second place.)

Kang: Skylar had the best two performances of the night — “Born This Way” was nice, but I kind of liked it better when she got back to her stomping roots with “Heard It Through the Grapevine.” She has this very rare ability to sing those high twangy notes with a ton of power. Carrie Underwood can’t do this. Neither can Faith Hill. Nor can Shania. And although those three are certainly very pretty, they don’t bring the energy that Skylar brings to each performance. I still think she’s going to stomp-point and eyebrow-furrow her way to victory. Jessica Sanchez seems like she’s shell-shocked — her performances last night were certainly skillful and impressive, but it sure felt like she was going through motions. Joshua Ledet already burned his Sam Cooke card and didn’t do a particularly great job (more on that later), and I don’t know if America’s really going to stick with Colton once the news gets out that he and his sister are Lannistering one another while poor Hollie looks on, cries, and says, “This is meeeking me very neeeeeevuhs.” That leaves Phillip Phillips. If the finals were tomorrow, I’d say Phillip wins, but there’s still more than a month left of the karaoke Hunger Games and I just don’t think Phillip has much ammo left. When’s he going to do DMB’s “Satellite”? Does he have any moves past that?

Can you explain why Elise Frank Testone is still on the show?

Kang: Last week, I gave you the Skylar Laine/George Bush “Separated at Birth” exclusive. This week, I’m going to reveal the unbelievable, groundbreaking news that Elise Testone looks like Mariah Carey, if Mariah Carey had her wisdom teeth pulled and got hit in the face with an anti-anti aging machine. Her continued presence on the show would have made more sense back in the heyday of “Vote for the Worst,” but nobody cares enough about Idol to rig the results anymore.

Actually, I’m recalling something you told me during lunch last week about Idol’s viewing demographic and how they’re actually much older than you’d imagine. Like the show is basically NCIS, supplemented with a bunch of tweens who vote for their future husbands. If this is true and if we believe the evidence that old people now know how to text message (source: My mom now texts me), I suppose there’s a chance that a block of very bored old people on the East Coast might be voting for Elise because she reminds them of someone they used to know, back when singing like Joan Jett was still a relevant thing to do.

Lisanti: I’m not going to join you on your anti-Testone jag. I like her voice. At times she’s got this “rock-and-roll Sade gargling with pushpins” thing going on, and that’s actually more pleasant than it sounds, and to my ears a lot better than Colton Dixon’s “emo wolf with its paw caught in a bear trap” nonsense. But I’m pretty mystified she’s still around. I don’t think any of the Olds are voting for her (they’re still waiting for Mandi to teach them how to text); I think it has more been a lucky combination of the judges pushing really hard for her (one of those rare instances where they have any effect on the outcome whatsoever) and the voting tweens punishing various contestants for reasons inscrutable to us. She’s on borrowed time, though.

Thoughts on Joshua Ledet? Has he become too one-notey?

Lisanti: Is the “problem” that he’s “become” too one-notey, or that he’s always had just the one note, and it took two months of performances to reveal that fatal flaw? Since the very beginning, he’s taken every song to 11 by the first chorus, then spent the rest of the time stripping the knob. His thing is great if you’re into singing the devil out of churches, but it’s limited, at least as far as Deathmatch Karaoke goes. Very real chance he’s gone next week, if he’s not gone tonight.

Kang: This is how Joshua sings: He starts with “ROWWWWWR!” Then he goes straight into “whoawhoa,” before either ramping it back up to “WHOAWHOAWHOA” or “YAHYAHYAH.” When he really means some shit, he goes, “heh,” like Eddie Murphy doing James Brown in Delirious. This combo was mind-blowingly awesome when we first heard it, but at this point, it’s becoming a bit repetitive. Singing Sam Cooke was an inevitability, but man, was that ever underwhelming! “A Change Is Gonna Come” was built for Joshua’s voice. It’s a song that actually can’t physically be oversung, a song that can hold as much volume as Randy Jackson’s colostomy bag, and Joshua, who oversings better than anyone on the show, kind of sang around it. He didn’t hit any of the notes head-on, he kind of skirted around and looked for opportunities to throw in the old “ROWWWR-whoawhoa-YAYAYAYAHHH-heh” combo, and then before he had a chance to really ramp it up, the song was over.

Kang: I mean, Frank should go home, but I say Hollie finally gets the ax. That might be wishful thinking, though. I’ve grown a bit tired of her weird prancing banshee routine. Hollie, you vanquished the Magrane Fembot, you stuck around longer than any of us expected (Lisanti, remember when you put her dead last in our Idol odds handicapping preview?), you locked up a role as Baby Spice in the upcoming biopic, Not the Momma: The Baby Spice Story. This is all pretty good and more than you expected, no?

Lisanti: Bottom Three: Hollie, Elise, Joshua. I’ve bet against Hollie a lot recently, and she’s proven me wrong every time. The same with Elise. But we’re running out of people. Someone’s got to go, and that someone is … Joshua Ledet? Shit, let me check my math again. OK, no, it’s Elise, but Joshua’s going out next week. Or do they get rid of two tonight because of the save last week? I’m so confused. This show has broken me.

Magic Mike Trailer: Channing Tatum Is a Stripper, But He'd Really Rather Be Making Furniture

Survivor: One World — 'I'm No Dummy,' But Maybe I'm a Little Crazy