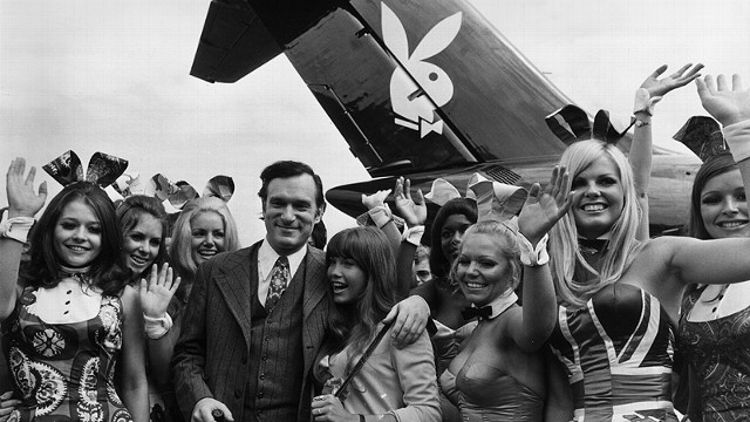 “Everything at the Mansion felt old and stale, and Archie the house dog would regularly relieve himself on the hallway curtains, adding a powerful whiff of urine to the general scent of decay.” — Izabella St. James, Bunny Tales: Behind Closed Doors at the Playboy Mansion

It has all the makings of a Gothic horror story: a formerly extravagant mansion falling into extreme disrepair, a once-great worldwide empire teetering on the edge of bankruptcy, an old man haunted by ex-wives, and his young bride who agrees to be confined to the crumbling estate. Octogenarian bachelor Hugh Hefner, the Citizen Kane of centerfolds, the Gatsby of funding breast enhancements, the American dream gone berserk, has married 26-year-old Playboy model Crystal Harris. Harris, who mocked Hugh’s age and mild libido to Howard Stern, has apparently had a change of heart. Or something. Because she left Hef at the altar two years ago and pawned the engagement ring and the two wed on New Year’s Eve at the Playboy Mansion in Holmby Hills, California.

Fifties lad mags like Esquire — where Hefner got his start as a copywriter — certainly praised idealized female forms and insinuated with a Roger Sterling wink that heterosexual men’s sexual appetites were a boundless and untameable force of nature. There was no shortage of lechery, as billions of contemporary “boss and secretary” comics attest. But Hefner turned the wink into an outright grope. He was a late bloomer whose college-sweetheart first wife cheated on him while he was in the Army, apparently fueling his lifelong obsession with overcompensating when it comes to sex and women. Hef launched Playboy in 1953 with a bank loan and investors like his own mother. He published nudes of Marilyn Monroe in the first issue and sold thousands of copies with that shining bit of old media, link bait. Like many people determined to reinvent themselves and overcome death, he eventually ended up in Los Angeles.

Does Leonardo DiCaprio, nearing 40 and still dating blonde models in their early twenties for yearlong increments, see his possible future in Hef? Does anyone really still look at Hef and think, Wow, that guy has it made! Hef is a perfect example of how being progressive for your time can calcify into an outmoded retro attitude within the space of just a couple decades. His beliefs are a mixture of broad-mindedness and sexist poison. He has always been a vocal critic of censorship and is an advocate of same-sex marriage, seeing it as an extension of the sexual revolution he helped begin. But Hef also says things like “Women are sex objects” in extreme sincerity — minus even the defensiveness of a Joe Francis — as if this idea were simply true.

Hef is now an embarrassing older relative — the kind of guy who thinks giving a woman an unasked-for pat on the ass is a compliment rather than sexual harassment. He is, after all, the man who posted a brass plate on the door of the original Chicago Playboy Mansion that read “If you don’t swing, don’t ring.” Doesn’t that make you feel like a dirty carpet? Having paved the way for American Apparel ads, Internet pornography, and music videos, Hef appears to be baffled as to why we aren’t all thanking him for setting the culture free. He seemingly has no clue what could be negative about a world in which women are sexual consumables with a shelf life that men of all ages get to judge. It’s still better than the buttoned-up and repressed (but so horny) American early ’50s, right?

The reason we cringe so hard when confronted with the aging specter of cultural relevancy is because it reminds us that it’s not so far off for any of us. Magazines become irrelevant. Cultural attitudes change and old landscapes evaporate, as if the barriers our elders knocked down had never been there at all. Everybody gets old and frail and eventually dies. Who knows whether the name “Playboy” will mean anything in a hundred years? The magazine seems quaint now, with its airbrushed pictorials and cheesy puns. Playboy evokes nostalgia for an earlier, more furtive sexual world; its ’50s and ’60s spreads remain shockingly erotic. By the time Free Love came in, Playboy was already long on its way out, escorted by Gloria Steinem in bunny ears. Everybody gets old and frail and eventually dies, even rabbits.

Hef doesn’t know that what we feel for him is pity; for thinking keeping multiple girlfriends hostage in his pleasure dome would impress us, for hoping marrying a young woman will make him young again, for thinking he’s fooling anyone. You can picture the mansion’s screening room; dust motes floating in the projector light, a balding red velvet robe dragging on the floor, Hef tilting a naked lady floaty pen up and down as he dictates his assistant new Twitter updates like “Watching Home Alone with Crystal” (December 23), oblivious to the fact that the Grotto is rotting and with it the last vestiges of glamour tied to the Playboy name. How could we possibly explain it to him at this point if he hasn’t gotten it yet? Leave him to his fantasies.