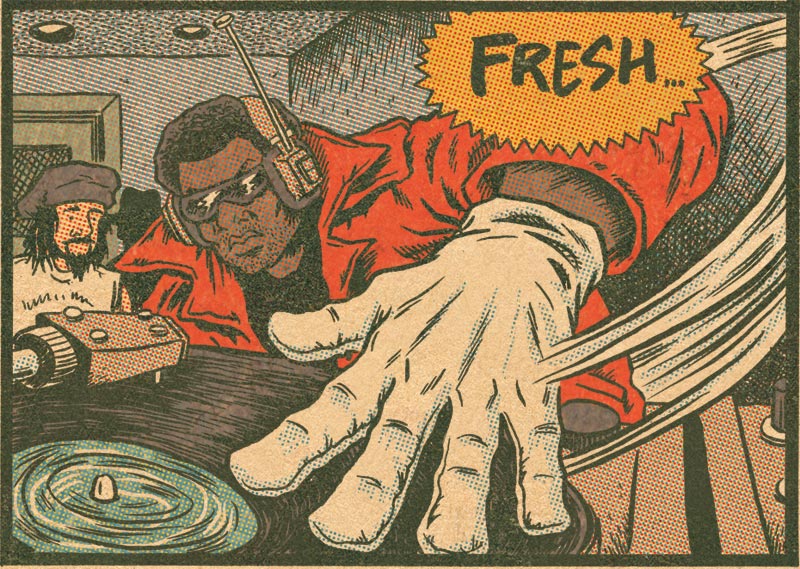 Ed Piskor’s Hip Hop Family Tree tells the story of hip-hop’s rise to cultural omnipresence without privileging the voices of that story’s winners; instead, each character who emerges from the crowded background becomes a protagonist worthy of our attention, even if only for a page or a single panel. Every name comes with a face attached, and Piskor’s nimble, deceptively goofy artwork imbues those faces with emotional life — hope, enthusiasm, fuming rage, determination. He knows where the story’s going as well as you do, but it’s like he’s pretending the ending isn’t fixed, bracketing a moment of exploding possibility in the present tense. Rather than a prelude to Jay Z’s coronation or a scavenger hunt for Dr. Dre’s first billion, Piskor reconceives hip-hop’s formative years as a vast collective awakening, a shift in consciousness, as if — as in the New York Dolls’ “Frankenstein” or George R.R. Martin’s Wild Cards novels — something happened over Manhattan, spreading mutant powers across the city and the world like a benign pandemic.

“[T]he medium provides a new angle on a familiar story, in a voice more directly empathetic than those of many prose histories,” John Leland wrote five years ago in a New York Times review of Harvey Pekar’s The Beats: A Graphic History. “It gives the hipsters back their body language.” That book was Piskor’s second collaboration with Pekar; Family Tree liberates and rehumanizes its characters in not-dissimilar ways. You may already know about Arthur Baker and Afrika Bambaataa programming drum machines to mimic Kraftwerk and changing the course of modern music, but Piskor shows us a furry-chested Baker crawling into bed and sharing the news of this triumph with his girlfriend, who is not amused. It’s one thing to read that in the late ’70s, Sharon “Sha Rock” Green became the first female MC to join a major rap group, Funky Four Plus One. It’s another thing to see the incredible picture the photographer and filmmaker Charlie Ahearn once took of her, which pops up promptly when you search her name on Google Images. She’s looking away from Ahearn’s camera, as if sizing up some unseen competition, fingers in midsnap; you can’t quite read the words “I’M SHA ROCK AN I CAN’T BE STOPPED” on her sweatshirt, but you can see them in the set of her jaw. This is the face Piskor draws when Green joins the band, and the way her lip curls tells us more about the steel and self-possession it took to make that happen than any caption ever could.

Last week Fantagraphics published the second Hip Hop Family Tree collection, which leaves off in 1983, with lisping East Coast rap impresario Russell Simmons nearly coming to blows with lisping future West Coast rap impresario Lonzo Williams after Run-D.M.C. plays Williams’s club in Compton and breaks his “latht good mike.” Minus the pinups and bibliography/discographies, everything in both books originally ran as a series of two-page webcomics at Boing Boing. Before Piskor started drawing the “Family Tree” series in 2012, he riffed on “The Hip-Hop/Comic Book Connection” in a 2011 strip, noting both forms’ New York roots and their shared predilection for cool costumes, secret identities, and epic battles; it’s probably the first and last time Dan Clowes’s nicotine-powered teenage hero the Death-Ray will stand shoulder-to-shoulder with Slick Rick in a comic panel. But for all that these two bastard art forms have in common, attempts at crossbreeding usually fail. A book like Percy Carey and Ronald Wimberly’s bold and beautiful graphic novel Sentences: The Life of MF Grimm is the exception; flimsy rapper-as-action-hero cash-ins are the rule. “A Wu-Tang comic where they’re portrayed as ninjas, or a Method Man comic where he’s fighting demons and shit like that,” Piskor says. “That stuff is so wack to me.” 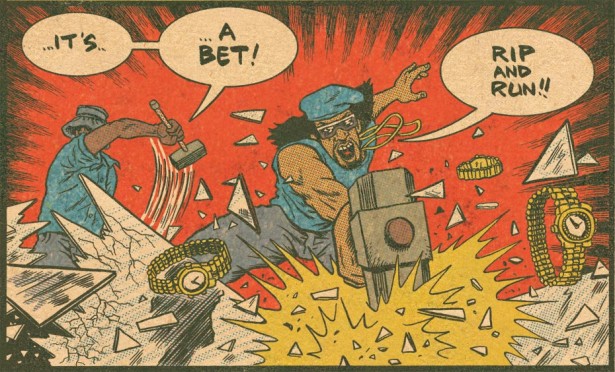 Family Tree explores those connections in a more profound way, using the exaggerated graphic language of superhero comics to capture the way rap blurs the distinction between self-definition and mythmaking — and to make up for comics’ inability to convey the power of a voice. Piskor draws Afrika Bambaataa & the Soulsonic Force dwarfing planets like Marvel’s Celestials and replaces the cowering family on Harvey Kurtzman’s first Mad cover with Whodini; a thief named Tracy Marrow swings a Mjolnir-like hammer during a jewelry-store heist. Near the middle of Volume 2, young Lawrence Parker — whom we haven’t seen since his first appearance 100 pages ago in Volume 1, frozen in his Flatbush bedroom as Mr. Magic drops “Rapper’s Delight” for the first time — flees his parents’ home along with his brother Kenny after fighting with his mom over the last box of Rice-A-Roni. Adrift in a city that looks not unlike Frank Miller’s Hell’s Kitchen, the siblings steal apples, shiver on park benches, talk about what they’d do if they had a million dollars. Kenny goes home after a day or two; Lawrence never does. We leave him in the library, where he hides out during business hours, an autodidact in a threadbare T-shirt.

Thirty pages later — during which time Afrika Bambaataa and Arthur Baker program their first beats, Duke Bootee writes what will become “The Message,” Kiss 98.7 hires Jazzy Jay and then DJ Red Alert to compete with Mr. Magic, and Lonzo Williams turns a young Compton drug dealer named Eric Wright away from his club and gets called a “Sylvester the Cat–sounding mother fucker” — Lawrence resurfaces. He’s come to see his homelessness as a kind of religious quest; he’s about to encounter the Bhagavad Gita for the first time, and when some residents of the shelter where he’s living and serving food call him “Krishna,” it’ll pluck a string inside him. But first, believing “that one must come near death to get close to God,” he charges into a rap battle. When he opens his mouth to rhyme, you recognize his face, if you haven’t already — Larry is now KRS-One. But Piskor draws black dots flying out of his mouth, the inking flourish Jack Kirby used to denote roiling cosmic energy — known forever after as “Kirby Krackle” — implicitly linking the Blastmaster to Black Bolt, king of the Inhumans, who could level a city just by speaking a word.

You could guess a lot about Piskor’s background from these juxtapositions. He was born in 1982 in Homestead, Pennsylvania, as the steel mills were leaving town, along with most of the white population. He was raised on superhero comics from the grocery store, and on hip-hop, or in it, because there was no sense of it being something alien you had to seek out and discover. “On an entire block, there might only be like two or three houses that were inhabited, in a lot of places,” Piskor says. “The street that I lived on was in between three different playgrounds, and at each of these playgrounds there’d be a basketball court, with one set of hoops and maybe 50 people who wanted to play, so while everybody was waiting to get their turn, they would form little circles and rap together, before they got their opportunity to get on the court. And then in some of the other playgrounds, guys would have their boom boxes and have these impromptu mini dance parties, just to pass the time. And this is stuff that I witnessed starting at 5 or 6 years old.”

He tried rapping “for maybe a week”; he was better at drawing. Superheroes, at first, although he always found himself drawn to the human-scale stuff within that world — an old Dwayne McDuffie What If? story about a powerless Fantastic Four fighting Doctor Doom in street clothes, the soap-operatic soul-searching of Chris Claremont’s Uncanny X-Men. “I clearly remember being more of a fan of the Peter Parker parts of Spider-Man comics than the actual Spider-Man stuff,” he says. By the time he turned 10, he’d had a formative encounter with Ron Mann’s 1988 documentary Comic Book Confidential, which profiles Stan Lee and Frank Miller but also underground cartoonists like Robert Crumb, Art Spiegelman, Gilbert Shelton, and Spain Rodriguez. It would take a few more years for Piskor to realize he’d been living a few minutes away from Pittsburgh comic shops where actual comics by all those artists were waiting, but the movie started something. The movie also alerted him to the existence of Harvey Pekar, who’d later throw Piskor some of his first professional comics work.

“I learned a lot from Pekar about storytelling mechanics,” Piskor says. The format of the Family Tree pages is similar to The Beats: “Each panel tells one specific moment in time, and then when you go to the next frame, there could be months that pass by in between. There could be years. You have to choose the exact right moments to talk about. That’s something I learned from Harvey.” 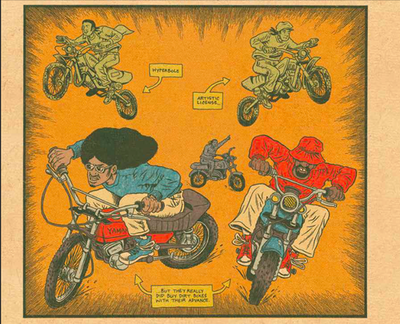 Nearly every moment — except the ones specifically labeled, Mad magazine–style, as “artistic license” or “hyperbole” — has a historical source. Piskor’s bibliographies in both books credit prose histories like Jeff Chang’s Can’t Stop Won’t Stop and Dan Charnas’s The Big Payback. The story about Lawrence Parker’s new name is from Ice-T’s documentary The Art of Rap; visual reference for many of the faces in the early installments of the series came from the work of Joe Conzo, a young photographer who documented hip-hop as a neighborhood culture in New York in the late ’70s and went on to become a New York City firefighter. The Arthur Baker panel was inspired by an aside in Baker’s Red Bull Music Academy lecture, and the strange abundance on Google Images of vintage Baker photos “where he has no shirt on and looks like a Wookiee.” But the spine of the book comes from the indispensable Ego Trip’s Book of Rap Lists, specifically the year-by-year rundowns of crucial rap singles from 1979 forward. Piskor tries to address every song from every year.

“And as I’m researching those songs and reading interviews, more stuff is unearthed, that comes before those jams, so I have to make sure I cover that stuff. It’s an archaeological excavation,” he says. “The biggest challenge is getting things in a certain order, so it builds to the next big thing … I would be lying if I said it didn’t drive me insane at points.”

But it’s precisely that omnivorous engagement with everything about this story — the tangents, dead ends, novelty hits, false starts, and future footnotes — that makes this book such a striking achievement. He says he met with bigger publishers before Fantagraphics and all of them wanted “a very circumscribed, clean history that would go from the earliest days all the way to, y’know, the death of Tupac, in 200 pages.” You get the sense the advance on that book might have been sweeter, and that Piskor never really considered it — that the whole point was to draw a map as big as the territory it means to cover. Each strip still appears first on Boing Boing, where Russell Simmons has only just met Rick Rubin. It takes as long as it takes. Right now Piskor’s signed up to do six books for Fantagraphics, which he estimates will take him about five years. “I hope to take it to about 1987,” he says. “But also, I’m not going to rush anything. This third book covers only 1983 and ’84, and there’s no way it’s going to cover all of 1984. There’s too much that happens. Beat Street. The two Breakin’ movies. The first big nationwide tours. That’s a lot of real estate. I’m just letting it breathe.”