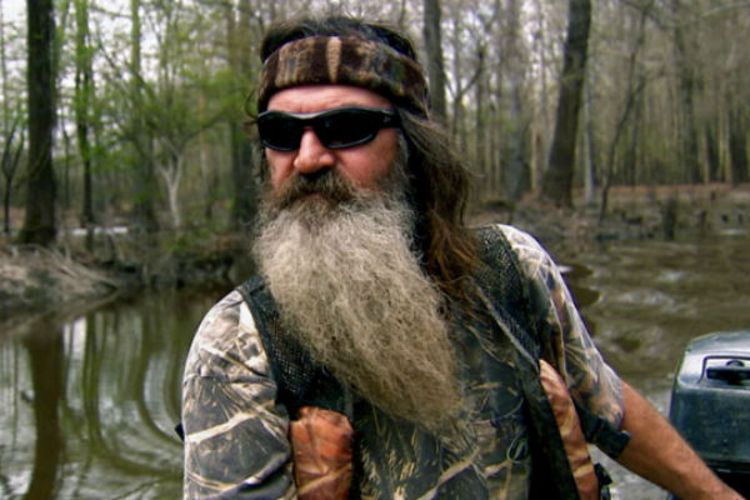 After making virulently homophobic comments in an interview with GQ, Duck Dynasty’s Phil Robertson — the patriarch of the woolly Robertson clan, and the founder of the Duck Commander empire — has been suspended indefinitely from the hit A&E show.

In the GQ article, Robertson, a self-described “Bible thumper,” proselytizes in no uncertain terms: “‘Start with homosexual behavior and just morph out from there. Bestiality, sleeping around with this woman and that woman and that woman and those men,’ he says. Then he paraphrases Corinthians: ‘Don’t be deceived. Neither the adulterers, the idolaters, the male prostitutes, the homosexual offenders, the greedy, the drunkards, the slanderers, the swindlers — they won’t inherit the kingdom of God. Don’t deceive yourself. It’s not right.'”

In response, A&E quickly released a statement: “We are extremely disappointed to have read Phil Robertson’s comments in GQ, which are based on his own personal beliefs and are not reflected in the series Duck Dynasty. His personal views in no way reflect those of A+E Networks, who have always been strong supporters and champions of the LGBT community. The network has placed Phil under hiatus from filming indefinitely.”

GLAAD, which had spoken out against Robertson earlier, patted A&E on the back for the move: “What’s clear is that such hateful anti-gay comments are unacceptable to fans, viewers, and networks alike. By taking quick action and removing Robertson from future filming, A&E has sent a strong message that discrimination is neither a Christian nor an American value.” That’s absolutely true. But, as always, things are a bit more complicated than that.

For one: The show’s next season is already in the can. According to THR, “He’ll likely appear in season four, which bows Jan. 15, since production is largely wrapped.” Certainly, the wild, improbable success of the show — 14 million viewers a week, my god — means A&E would have looked to produce new seasons into perpetuity (or at least until Phil Robertson’s seven-headed Beast of the Sea shows up, whichever comes first). But right now, what he’s on hiatus from is the likely, yet still theoretical, shooting of a fifth season. So are they buying time and hoping the flap blows over by the time fifth-season shooting starts? Or are they serious about reprimanding the guy?

For now, Robertson is already apologizing. In his own statement, he says: “I myself am a product of the ’60s; I centered my life around sex, drugs and rock and roll until I hit rock bottom and accepted Jesus as my Savior.” (From the GQ article: “He spent his days after [college] doing odd jobs and his evenings getting drunk, chasing tail, and swallowing diet pills and black mollies.”) “My mission today is to go forth and tell people about why I follow Christ and also what the Bible teaches, and part of that teaching is that women and men are meant to be together. However, I would never treat anyone with disrespect just because they are different from me. We are all created by the Almighty and like Him, I love all of humanity. We would all be better off if we loved God and loved each other.”

Here’s the thing, though. After reading the GQ article, there’s no way you can consider Robertson’s statements as some kind of overzealous slip of the tongue. There’s plenty of other homophobia: “It seems like, to me, a vagina — as a man — would be more desirable than a man’s anus. That’s just me. I’m just thinking: There’s more there! She’s got more to offer. I mean, come on, dudes! You know what I’m saying? But hey, sin: It’s not logical, my man. It’s just not logical.” There’s also, despite Robertson’s claim that as “white trash” he’s “with the blacks,” some thinly veiled racism: “If I’m lost at three o’clock in a major metropolitan area … I ask myself: Where would I rather be trying to walk with my wife and children? One of the guys who’s running for president is out of Chicago, Illinois, and the other one is from Salt Lake City, Utah. [Editor’s note: Mitt Romney is from Boston, not Salt Lake City.] Where would I rather be turned around at three o’clock in the morning? I opted for Salt Lake City. I think it would be safer.” And there’s the general thrust of the whole article: that Robertson is going to use his unlikely fame to proselytize further.

Explains the GQ writer, Drew Magary: “[H]e has a flock now. He and the other Robertson men happily tour the country, giving speeches and hosting Bible studies.” Adds Robertson, “All you have to do is look at any society where there is no Jesus. I’ll give you four: Nazis, no Jesus. Look at their record. Uh, Shintos? They started this thing in Pearl Harbor. Any Jesus among them? None. Communists? None. Islamists? Zero. That’s eighty years of ideologies that have popped up where no Jesus was allowed among those four groups. Just look at the records as far as murder goes among those four group.”

Through the piece, Magary treads the line carefully. He doesn’t attempt to rile Robertson up in moral debates to get him going: He just lets him talk, wincing much of the way. But he also, in order to enjoy the fresh air and clean living of the outdoorsman ways he’s being exposed to, conveniently skirts it. Writes Magary, “For what it’s worth — and since I actually looked it up — the violent-crime rate here in America has plummeted since 1990, even as church attendance has stayed the same. And, of course, Phil is conveniently ignoring centuries upon centuries of war, bloodshed, and human enslavement committed in the name of Christ. But I doubt any of that would sway Phil. And anyway, I’m a guest in his house and he is my welcoming host, so I smile politely and nod like the milquetoast suburban WASP that I am. If you can’t reconcile some of the things Phil says with his otherwise friendly demeanor — perhaps because you are gay, or a duck — I don’t blame you. And I don’t blame Duck Dynasty for keeping the show safely apolitical, ensuring smooth digestion for a mass audience.”

I don’t, either. But let’s be real: There’s no way, over the course of four seasons, that A&E hasn’t heard this stuff from Robertson before. They’ve kept it off the show, because of course they have. And they’ve apparently managed to keep Robertson from speaking his mind in interviews so far. But now it’s out — as, surely, A&E knew it would be eventually. For a couple of years now, Duck Dynasty has been a heartwarming, scrappy success story: A band of hairy country folk become the darlings of pop culture, and gosh darn isn’t that sweet. But it turns out it’s not just vague “traditional values” that the Robertsons represent. It turns out that Phil Robertson is an aggressive religious fundamentalist, completely out of touch with the bounds of modern society. And he wants us to repent for our sins. Not quite as heartwarming now.