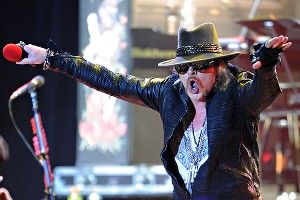 You thought this was a game for Lana Del Rey? You thought she’d be content just bombing through the scene, pouting her lips, dominating all music writer-y conversation for two months, launching a thousand think pieces about the value of authenticity, twirling around like a crazy person on SNL, and then releasing a middling, forgettable album? You thought it’d be over this easy? No way, kid. Lana Del Rey? Lana Del Rey is unstoppable.

Which brings us to this Friday night, at the Chateau Marmont in West Hollywood. The famed hotel is home to a proud history of celebrity misbehavior and high jinks; it’s been paid tribute to on film and in song. But this past Friday night saw the hotel at its absolute, undeniable apex. Because last Friday night is the night that 25-year-old Lana Del Rey and 50-year-old Axl Rose were spotted leaving the Chateau Marmont together. The New York Daily News provides some healthy context:

Del Rey has long admired the Guns N’ Roses singer, and just last month, attended two back-to-back shows in L.A. to show her support. Prior to making it big with her controversial stint on “Saturday Night Live,” the singer even recorded a song “Axl Rose Husband,” in which she exhalted Rose. “You’re my one king daddy, I’m your little queen,” she croons on the track. On Friday, the pair left with a female friend — Rose almost climbed into the backseat of the SUV with Del Rey before popping into the front seat, leaving Del Rey and the other woman in the back.

So maybe LDR has been a longtime fan of Mr. Axl Rose. Really, who isn’t? The difference is that most of us limit the outer reaches of that fandom to, I don’t know, giving Chinese Democracy another chance. But most of us aren’t contentious sexpot singers with a preternatural talent for getting people all ruffled up. Maybe this was a wondrous one-off night for Lana and Axl, and will never be spoken of again. Or maybe they’ll be inseparable for a while, and Axl will bring Lana on tour with Guns N’ Roses and let her play lead on “Rocket Queen” every night. Whatever road lies ahead for the unlikely lovebirds, this much is clear: Knowingly or not, Lana Del Rey just pumped an extra week’s worth, at the minimum, of bemused/angry commentary into her personal backlash-to-the-backlash, etc. trajectory.

By the way, here’s the LDR song the Daily News mentioned.

It’s a crackling slow-dance jam in which Lana pours her heart out to a man to whom she’s committed as if he were Axl Rose. “In blue denim I meet you / Barefoot I need you,” Lana purrs. “Diamond horseshoe sparklin’ / You’re my king Jewish maven / Kids on vacation / Florida Keys are calling / Come back to me / Come back to me.” Now, though? Now she’s, quite possibly, gone and landed the real deal. It’s a goddamn fairy tale.

Songs of the Week: Kanye's Back! Maybe You've Heard?