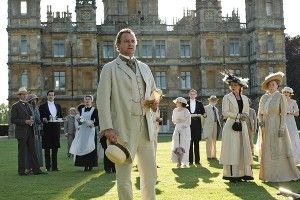 Good news for fans of fancy old-timey British stuff: Julian Fellowes, the creator of Downton Abbey — a.k.a., your favorite Anglophile’s favorite Anglophilia — says he’s writing a prequel. Right now Fellowes is considering doing so in book form, although everyone seems to have gone ahead and assumed it’ll end up a TV show. With the highly anticipated third season on the way, he says any action on the prequel front won’t come until this present iteration is all done for. Speaking at a British Academy Film and Television Arts screenwriters’ lecture, Jules explained his plot:

I do actually have an idea of doing a prequel of the courtship of Robert and Cora, when all those American heiresses were arriving in London. They had a slightly troubled courtship, because she was in love with him before they married, as we know, and he married her entirely for her money. I sort of feel there’s something quite nice in there because he’s a decent cove, and so he feels rather guilty about this which has affected their marriage beyond that.

For me, any other books or plays or films should follow after the end of the television show. I don’t think you can continue a narrative in more than one area at once. I never really liked those Coronation Street Christmas specials where they all go to Haiti, and you don’t have to watch it. Somehow it doesn’t feel very organic.

A good cove! Coronation Street! I have almost no idea what this guy is talking about, but all of his charming Britannia is reminding me I should probably start watching Downton Abbey.