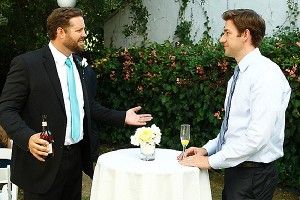 As if powered by a Pawnee-esque serving of Dwight’s vomitous blue energy drink, the momentum of last week’s final-season premiere carried through last night’s cold open. The quick degradation of the chore wheel into a much more exciting fun wheel (cue Erin sound effect) was everything that was and is still delightful about The Office: a gaggle of brightly drawn, warmly familiar characters elevating the mundane into absurdist glee. (Who would mind scrubbing the toilets if a tiny piece of circular cardboard commands it?)

But the smile frayed around the edges after a while. The Nellie-Dwight pairing is a risky play — characters that broad usually need somebody narrow to bounce off of — and despite the night’s first (and sorry, Parks, best) font joke, devoting a third of an episode to the mystery of whether someone will sever someone else’s hand with a cleaver, Taliban style, left a lot to be desired. (There are plenty of better Taliban gags, anyway. You’re telling me there’s no local version of the Buddhas of Bamiyan in Northeastern Pennsylvania?) And I also didn’t find much to like in Clark’s instant heel turn. Meanness can drive story but it also rings false in a show so dedicated to the essential sweetness lurking inside of everyone, even cleaver-packing beet farmers. (I feel similarly about the strange level of commitment to the Oscar–Mr. Angela story line. He’s really boning her husband? That is a considerably more aggressive inter-office prank than, say, hiding his stapler in Jell-O! And I don’t mean that in the sex way.) Furthermore, it allowed Andy to continue down his maddeningly vague road to Michael Scottsville. Yes, the Cornell grad has an ego and little-to-no street smarts. But last season he was willing to drive to Florida for his ginger-haired Kia Sonata. Would he really let her stray to burger heaven with New Jim just for some fake camera time?

Yet despite all this, I still found “Roy’s Wedding” — written by former Colbert Report head writer Allison Silverman — to be a fairly strong episode. Last week I noted that The Office’s final story was really its first: Jim and Pam. I’d like to amend that: It’s the only story. Now that the showrunners can make hay over the deadening monotony of the characters’ once-romantic lives — as long as The Office was without an end date it was verboten to draw attention to the inescapable central sadness lurking just behind the vending machines — the been-there, married-that couple suddenly seems strangely compelling. Was it in any way plausible that Roy would (a) have a pre-work wedding at 8 a.m. on a weekday, and that (b) Jim and Pam would actually go? No and no. But the post-post-honeymoon fade on Jenna Fischer’s face was affecting and the sudden introduction of Jim’s one big secret in a settled life otherwise devoid of them moreso. I think we can all see where this is going — temporary peril followed by permanent home seats at all Sixers games — but I’d much rather watch this play out than Andy’s inevitable cuckolding. Turns out The Office’s ship hasn’t sailed after all.

Netflix’s best binge shows tend to fall into two categories. There are the can’t-miss dramas that suck you in and spit you out days later, leaving you dazed, breathless, and finally able to understand all those tweets about Omar and Honey Nut Cheerios. And then there are the bubbly, sugary, Sweetums-like comedies that fill the gaps between all the other things we do in the privacy of our homes (in my case it’s: watch other television and then write about it; top o’ the world, ma!), empty calories that stave off boredom and interpersonal conversation. Your The Leagues and Workaholics sprinkled with favorite reruns of Family Ties and Cheers (speaking of which: check out this amazing oral history of the place where everybody knew your name; it’s Must-Read TV).

Interestingly, Parks & Recreation falls somewhere between the two categories. When gorged upon like the No. 2 value meal from Colonel Plump’s Slop Trough, the show is as comforting as the most mindless of laffers but still compulsively compelling; maybe not as addictive as Heisenberg’s blue magic but at least as good as the waffle batter at JJ’s. When taken as a whole, the careful plotting and gradual change worked into every season by Mike Schur and his staff is more easily appreciated; nuance that can be overlooked on a weekly basis — like a Tokyo Drift racing stripe on a golf cart — is more noticeable. I saw this because “Soda Tax” was above all else a bridge episode. (This guy knows what I’m talking about.) Sure, there were good gags (most of which involved Chris Pratt’s jiggly, un-policelike body — though we all remember that Louis CK seemed to have passed that entrance exam no problem, right?) and some fairly trenchant political satire (I live in a city where this is actually a thing). But the half-hour’s heaviest lifting was devoted to kicking the can — excuse me, “tossing the disc” — down the road a ways: giving Leslie her first crisis of conscience as an elected official and having Ben push April for that extra 3 percent effort via a choice Rob Schneider imitation from “40 years ago.” I didn’t love it on its own. But when considered as a stray piece of ‘za in a larger, more considered pie it went down just fine.

I’m actually enjoying this transitional season of SNL a great deal — despite the noticeable absence of Kristen Wiig and the Lonely Island’s digital shorts, it’s fun to see what the kids can do when given a chance. (Any fan of a losing baseball team post—trade deadline can relate. Everybody’s a future superstar with a small enough sample size!) Early returns are definitely positive for Taran Killam, Nasim Pedrad and new favorite Kate McKinnon, who last night made a lame joke about working in an apple store that actually sold apples sing. But I’m still not entirely sold on Jay Pharoah. The guy is a brilliant, otherworldly mimic, but I’m not sure he’s all the way there yet as a performer. Don’t get me wrong — I’m thrilled he’s got the podium with the seal on it and Fred Armisen is back doing what he does best (portraying the president of Iran as an Austin Powers—quoting goofball, evidently). In the cold open, Pharoah’s Obama was uncanny, from the relentlessly thoughtful pauses to the exasperated up-speak on “I went from hip-hop star to jazz musician!” but comedically inert.

But perhaps it’s best not to vote for impeachment yet; the sad truth is that no one has managed to do a funny Barack Obama imitation. The guy is as immune to parody as he is to attack ads in Ohio. I’m all for fair and balanced comedy, but SNL has better success when taking shots from the sidelines — like Kenan Thompson’s giddy Cornel West. I’m already considering asking my editors to swap my paycheck for costume jewelry and cornbread.

You’d think that having every character lose his or her job in one fell swoop would inject even a floundering show with a frisson of nervous energy and purpose. But think again. This is Up All Night; where the comedic stakes are so perpetually low — this week involved a yapping dog with fertility issues and a sad clown recording a mattress commercial — that I spent the deserts of time between chuckles wondering if it would be possible for future story lines to dip even lower. Perhaps an entire episode about running out of Triscuits? The panic felt when the local 7-11 stops stocking organic laundry sheets? An unexpected drizzle?

Up All Night assumes the audience will feel sympathy for the busy, harried lives of Reagan and Chris, but their economic fantasyland renders anything but eye-rollingly close to impossible. The two are now unemployed but are still free to toodle about in their Volvo SUV, judge their neighbors, and start a fun family business out of the garage. (Apparently the garage isn’t zoned for that but — hey, no bother! Reagan ended the episode by offering to help her 47 percenter husband “find” a real office space. Great! With that problem solved there’s more time to get back to discussing the difference between yogurt with berries and yogurt without.) The gamely energetic stars (and guest stars like Ben Falcone and Sean Hays) continue to sell this stuff with all their showbiz-loving hearts. But, unlike the Brinkleys, I don’t have the unlimited budget — or patience — to keep buying in.