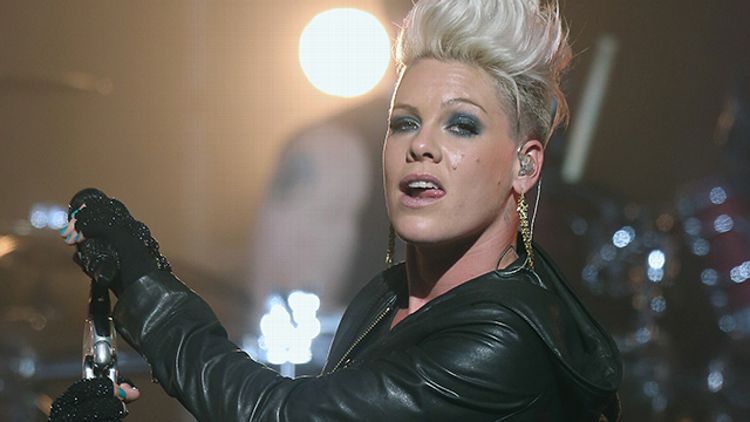 If this is your first encounter with DIVAWATCH, click here for the explainer.

It’s been 11 years since P!nk did 5,000 sit-ups, oiled up her abs, and wiggled her way through a forgettable verse in “Lady Marmalade.” That song, which reached no. 1 on pretty much every chart in the world, put P!nk on the map as “the one who comes after Mya, but before Lil’ Kim.” Her backup status was understandable at the time — nobody, save Biggie, has ever shared a stage with Lil’ Kim without getting out-somethinged. Xtina was hovering somewhere around a 98 out of 100 on the upstaging presence scale back in 2001 — even Celine would have had a hard time blowing her off the mic. But something a bit unexpected happened after Moulin Rouge. Lil’ Kim kept getting locked up. Mya disappeared completely, save the time The Game shouted out her ass on the cover of King Magazine. Xtina went soft/inspirational with “Beautiful” — her top Diva jam of all time — but quickly fell off as the public grew weary of the tween pop saturation of the late ’90s and early aughts. All the while, P!nk quietly scrapped together a persona, mostly with the help of that girl with the fucked-up hat from Four Non Blondes.

If you listen to this, you’ll hear the influence, especially in the intonation of the screamed notes …

Realizing she could never compete with the real smut merchants, P!nk decided to go “hardcore.” She cut her hair, started dissing other pop stars, and began awkwardly dropping profanity into her lyrics. She stopped smiling, choosing instead to fix her Vulcan-like features upon the camera with a heavily mascara’d look of condescension. She honed her emotions down to “hushed reverence for silly, easily accessed feel-goody underdog stories” and “silly, vague indignation.” She became, in short, the worst clove-smoking teenager ever.

Does this mean the D!va Committee hates P!nk? No! Quite the oppos!te! We kinda sorta like P!nk! Remember, the D!va System is ultimately valueless, mirroring the postmodern nihilism of its creators. As such, there’s nothing inherently wrong with a potential D!va who truly believes in her own rebel rock, as long as said rebel rock is good. What the D!va Committee hates is fake-ass D!vaness (Alicia Keys), general fakery of all varieties (Alicia Keys), and cynical, corporately peddled fake-soul (Alicia Keys). P!nk doesn’t qualify for any of that. She seems to really believe that the lives of young people can be uplifted through song, especially if that song reminds them that they are “fucking perfect.” Her songs might be a bit clumsy and a bit too earnest, but you know, the same thing could be said about Weezer’s first two albums. And without those, the Internet as you know it wouldn’t exist.

So … For her stick-to-it-iveness and her longevity, we welcome P!nk to the rankings! Who would have ever thought she’d be the last Moulin Rouge girl standing?

Let’s get straight into it.

TAKING THE LISTENER ON AN EMOTIONAL JOURNEY (300)

Every five years, a Diva has to record an “uplift song,” mostly aimed at people with life-threatening diseases and teens who just had, like, the worst day ever. (Nobody will ever top TLC’s two contributions to this genre — “Unpretty” and “Waterfalls” are perfect songs.) P!nk has tried on a few occasions to schmear on the “up with people” schmaltz, but none of those schmear attempts went on quite as thick as “Fucking Perfect.”

She didn’t quite get there, did she? The problem with only being able to go between “hushed reverence for easily accessed feel-goody underdog stories” and “silly, vague indignation” is that you can’t access adult emotions. P!nk will always insist on the emotional journey, but when it comes time to get in the car, she will claim to have lost the keys. Then she’ll pop in a DVD of Blue Planet and offer you a bong rip and the two of you will get super stoned and at some point, you’ll say something stony like, “Hey man, like, I’m not a fan of technology, per se, but this is, like, amazing that we can be there and not have moved off our couch.”

That’s just cloud talk, man. Here’s some more: the insistence of an emotional journey in a Diva’s work is ultimately what derails the train.

She has always suffered from a lack of range and can’t go soft. And while she operates 90 percent of the time at about a nine, she can’t ramp it up to 11. There are two to three kids on every season of American Idol with better pure pipes than P!nk. But despite her limitations, there’s still something good and unique about P!nk’s voice — she has created a sound, almost out of necessity, that evokes a very specific yet mostly undefined sort of angst. Like, when you hear a P!nk song, you know you’re supposed to be mad in the way P!nk is mad, but you can’t figure out why you’re angry or who wronged you. It’s a little blindfolded bird of indignation that flutters up and then dies quickly in your chest.

Steven Tyler had something similar if you swap out “mad” with “suburbanly titillated.” (Steven Tyler, of course, had the insane range and the pipes to go with it.)

P!nk went big and weird here, but didn’t move the committee at all. She did look like she was in really great shape, though. Also love the cheer that goes up when she drops the robe. Like, “Hey, nudity! Awesome! Who says the Grammys are stupid?”

And here we come up against everything that’s wrong with P!nk — the boring first bars, the poetry-slam lyrics, the Carmela Soprano look of sour disapproval.

Look, Canibus shone on a track with Method Man, Redman, LL, and DMX. This doesn’t mean we should fault P!nk for getting blown out by Kim and Xtina, but we also can’t keep giving her a pass on this shit. She does get 10 points for dissing every tabloid princess in that song, but the song itself was so bad that I can’t even embed it here.

She doesn’t do much work in this category. In the video above, she makes a halfhearted fist at “punch them in the mouth” and then sorta flails and power-squats. The committee suggests she learn the “talk to the hand while closing your eyes and turning your head slightly to the side” move. It has worked for years for Xtina.

This was hotly debated among the committee. Some said P!nk has really only gone through two phases: p!nk hair and wh!te hair. For a D!va to have been around for 10-plus years and only really go through two phases is unforg!vable. I’d usually agree with this argument and point out that this was one of the problems with Br!tney’s career (OK, I’ll stop with the exclamation points now … Sorry, it’s !!:52 p.m. and I can’t sleep), but Pink, like Etta, successfully defined herself by her hair. This is hard to do.

In the original rankings, we assigned “stank” 30 points and limited it to just the sauce a Diva lays on a note when she’s been challenged. Everything Etta or Ma Rainey or Nina Simone did can be encapsulated within “Taking the Listener on an Emotional Journey.” Stank was something else, best exemplified by Gladys Knight in this clip.

Since then, we’ve received quite a bit of reader feedback that asks why stank, which is impossible to really
define, isn’t worth more points. Honestly, we don’t know how to properly rate stank and have always tried
to acquit ourselves with the following maxim: “You know it when you hear it.”

Which is all to say, we hear very little from P!nk.

Step it up, girl. Breaking up and getting back together with some BMX bro doesn’t cut it.

She’s no Kelly Clarkson, who has this category locked down until Adele goes into her “Disco Aretha”
phase.

This is P!nk’s category to lose. She’s not quite there yet, but she’s going to dominate this category once
Celine fully morphs into the Cryptkeeper and vacates her “Aging Into a Drag Queen” throne.

She does this with grace and skill. Nobody really dislikes P!nk, right? And there are tons of 14-year-old girls in Doc Martens who smell faintly of Manic Panic who absolutely love P!nk.

P!nk scored a 600 on the Diva Scale, which places her in range of Toni Braxton, Lady Gaga, and that annoying woman from the Cranberries. Again, none of this should be read as a knock on P!nk — we’re all very impressed that she managed to put out another no. 1 single. But if she wants to boost her rating in these upcoming years, she’s going to have to find another gear. Yes, she can put out a “P!nk song” every five or so years and find another generation of adoring fans, but let’s not confuse commercial success with actual innovation and rediscovery.

P!nk, we like your music and root for you, but for you to crack on through to the Kelly Clarkson level, we need to see something new. Why not sing a nice cover at all the award shows you’ll undoubtedly be performing in this upcoming year? Like, why not give “Son of a Preacher Man” a shot? Or maybe “With a Little Help From My Friends?”