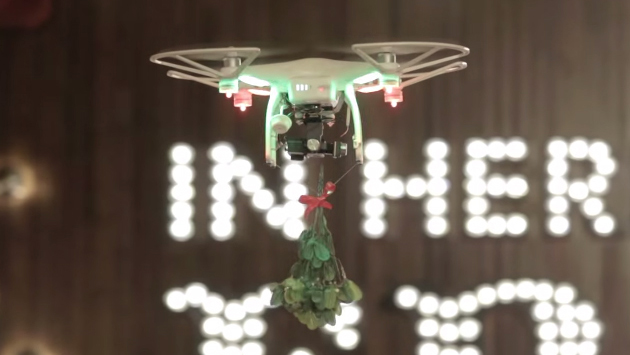 When the war between humans and drones begins, we’ll be able to trace it back to last week, when a drone drew first blood from a civilian innocently trying to participate in the mistletoe kiss-cam promotion at a TGI Fridays. The terrible idea was for drones carrying mistletoe to fly over customers’ heads, encouraging them to kiss. The results would be broadcast throughout the restaurant. On December 4, a photographer named Georgine Benvenuto was at a Brooklyn location of TGI Fridays when a drone operator trying to land the “mobile mistletoe drone” on her hand accidentally “clipped off a part of her nose instead.” The drone operator blamed Bevenuto, saying the accident wouldn’t have happened if Benvenuto hadn’t “flinched” when the drone was using her hand as a landing pad. Benvenuto was there to document the promotion for Brooklyn Daily. “It literally chipped off a tip of my nose,” she said afterward. “It took off part of my nose and cut me here, right under my chin.” The photo of her from the crime scene (included in the Brooklyn Daily story) matches up. Benvenuto wasn’t as pissed as she could have been, finding the humor in the ridiculous situation; “Thank god it didn’t go anywhere under my eye — that is my livelihood.”

The odds that a rogue mistletoe drone would eventually accidentally clip someone in the face were pretty, pretty, pretty good, but it’s impressive that it happened so quickly. TGI Fridays issued a statement saying that the mistletoe drone promotion had gone off without a hitch in Texas and Long Island, claiming it was the fault of the customer in Brooklyn for getting overly involved. “We do not let consumers touch it,” spokeswoman Frances Karkosak told Brooklyn Daily. A local who saw a photo of Benvenuto’s injuries downplayed them by saying, “I’ve seen far more worse blood than that.” The drone operator claimed he was innocent, and said it was a risk of pushing the boundaries of combined drone/fried appetizer technology; “People get hurt in airplanes, they still fly. There is a risk involved — anything flying, there is risk.” Out of context, that quote would sound like it came from a statement by a government agency.

I decided to do some investigative journalism and try to find a TGI Fridays in the Los Angeles area doing the mistletoe drone promotion, because I secretly wanted an excuse to go eat at a TGI Fridays. I called three Fridays locations, in Alhambra, Compton, and Woodland Hills, all of which said they were not yet deploying drones. Two locations were not even aware of it. The third said it had just received information about the promotion, but had yet to receive any drones. This meant a few possibilities: Southern California was a no-fly zone for the TGI Fridays mistletoe drone promotion, the mistletoe drone promotion had been in the works but was already downed by the Brooklyn incident, or the TGI Fridays staff had been ordered not to talk to journalists about the accidental drone strike. NSA conspiracy? Or mere transcontinental lag between casual dining branches?

I called one more branch of TGI Black Ops Fridays in the Valley. After being ferried to an operator, I found out the truth. He first professed ignorance about the mistletoe drones, and then informed me that the California branches of Fridays are run by a different company than the ones in Texas and on the East Coast. The Fridays doing the mistletoe drone promotions are owned by megaconglomorate Carlson, which owns only one branch of TGI Fridays in California, at Knott’s Berry Farm. I told him about the drone promotion and explained that I was calling to investigate because somebody’s face had gotten chopped by the drone’s blades in New York, and he laughed. When I called the Knott’s Berry Farm location, the manager there told me that they don’t typically do those promotions because they are owned independently by Knott’s Berry Farm. Turns out that while Carlson did own Fridays, in May it sold the chain to a private equity firm with the bland Super Pac–style name “Sentinel Capital Partners and TriArtisan Capital Partners” — presumably staffed and run by Sentinels.

Maybe the kiss cam made sense. As it happens, Alan Stillman founded the restaurant as a place to help him pick up women, and Fridays is considered one of the first “singles bars” where women armed with the pill could go trawl for casual sex. I was satisfied, although dissatisfied with not having an excuse to go eat mozzarella sticks beneath fake Tiffany lamps. But the frozen mozzarella sticks I picked up from the grocery store were just as good, even without the hum of sugar plums and mistletoe drones buzzing overhead.