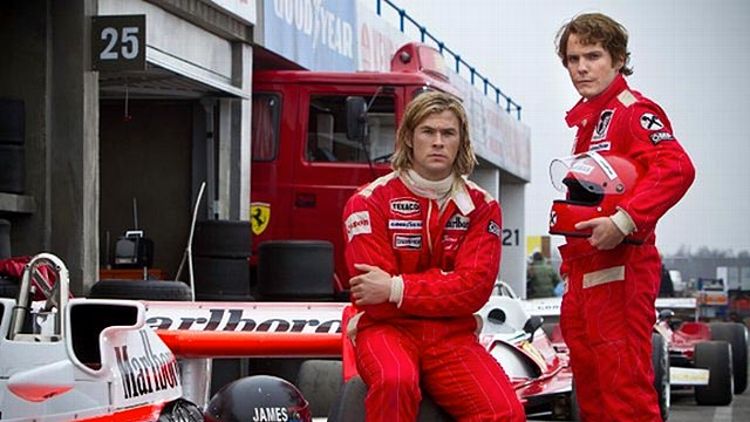 The latest Ron Howard film, Rush, goes wide in theaters today, and I (along with Grantland poo-bah Bill Simmons — more on that later) definitely recommend it as a fun watch. Don’t trust my taste in movies? Well at least trust the people at the ArcLight who applauded as the credits rolled; they must know something. Anyway, enough chitchat. Here’s a quick synopsis of the “based on a true story” film:

Chris Hemsworth plays Englishman James Hunt, a suave, blond playboy who lives to race fast cars because he likes living life on the edge. Basically he is the embodiment of One Direction’s “Live While We’re Young,” complete with the booze, the women, and the carefree lifestyle. (I apologize for making that reference but not enough to take it back.) On the opposite side is Daniel Brühl, who plays the surly (funny) dickwad Niki Lauda, an Austrian who was born into privilege but rejected the family fortune when his father refused to support his racing. He says he races because it’s the only thing he can do that makes him money — yeah, it doesn’t make sense to me either, given his family’s standing. The two racers become rivals when they see each other at a Formula 3 race, then again in Formula 1. About 70 percent of the movie are scenes from the racetrack, including a hefty 20 percent of the two staring at each other before and after races, and the remaining 30 percent are scenes of adversity from each of their lives.

So that’s it for synopsis. If you’ve already seen the movie, here are 10 lingering questions you might have (if you haven’t seen it yet, tread carefully — spoilers ahead) about the real-life story.

1. Hunt and Lauda called each other assholes a lot in the movie … did they really hate each other that much?

No, not really. They were rivals on the track, sure, but they were actually close friends and lived together in London at one point. In fact, in a recent interview with The Telegraph, the typically stoic Lauda got a little teary as he talked about Hunt’s death.

2. Lauda says there’s a 20 percent chance he could die every time he gets into a car and refuses to accept any higher percentage than that. Is the 20 percent figure right?

Well, lucky for you, the BBC explored this question and did the math already. Basically, no, the risk was not that high in 1976, though if a Formula 1 driver participated in every race for five years, the percentage did get close to 20.

3. The movie’s portrayal of Lauda’s 1976 crash seemed pretty real and vivid, but I want to see the real thing. Is there video footage anywhere?

Yes, but it is not for the faint of heart.

4. Was Lauda’s face really that burned from the accident? What sort of surgeries did he need? Did he really tell the priest to “fuck off”? And how did they make Brühl uglier in the post-crash scenes?

Whoa, there, one at a time. Yes, Lauda “suffered horrendous burns to his head and face [and] part of one of his ears was burnt off and his tear duct mechanism was severely damaged.” He also “broke numerous bones and cauterized his lungs” after sitting unconscious in his Ferrari for 40 seconds as it went up in flames. And unlike what the movie depicted, Lauda was given last rites while he was in a coma, but recovered shortly after.

As for Lauda going under the knife, the racer only had reconstructive surgery on his eyelids and actually said recently that he “can’t stand plastic surgery.” He’s also never done anything about his protruding teeth (the origin of “The Rat” nickname).

5. What’s the real reason Lauda pulled out of the 1976 Japanese Grand Prix? The movie made it seem all romantic and for his wife, but that’s so not him! Is it???

Yes and no. It was fogging up inside his helmet and he had trouble seeing, especially with the burns from the near-fatal crash. He calculated the risk and decided it was too much and his life wasn’t worth it, so he drove one lap around so Ferrari could get the money, then left for the airport. His wife was definitely part of his decision, but it was about more than just her.

Lauda in 1979: “It’s too dangerous out there. It’s suicide. There are more important and valuable things in life than winning the world driving championship.”

Lauda in 2013: “To me it was clear. It was simple. The circuit was flooded. Flooded. The rain did not stop for two hours and this idiot Japanese race director came and said the race is on now … this for me was the most stupid decision ever … For me it was logical. I think I would do the same thing again today.”

6. Did Lauda win any more titles after 1976? When did he retire, and what did he do after?

Yep, Lauda was never one to give up early. After pulling out from the 1976 Japanese Grand Prix, some in Italy called him a coward (Hunt characterized his withdrawal as brave). Enzo Ferrari made plans to replace Lauda, which angered the Austrian. Prodded by Enzo’s disrespect, Lauda won the 1977 title and told Enzo he was leaving Ferrari for another team. The next year, Lauda finished fourth, and in 1979, he retired since he was “tired of driving around in circles.” He couldn’t stay away for long, though, and returned as a member of McLaren in 1982, going on to win the title again in 1984 before really leaving the sport the next year. Lauda later patched things up with Ferrari and served as an adviser for the brand as well as a Jaguar team principal and a television commentator.

7. OK, enough about Lauda for now. Tell me about Hunt. Did he really have dalliances with so many women? Did his wife really leave him for Richard Burton?

The short answers are yes and yes. Hunt was believed to have slept with more than 5,000 women, “sometimes having sex minutes before a race.” Apparently “Hunt’s appetite for wine and women was legendary.” Exactly how legendary? Well, Hunt slept with 33 British Airways stewardesses and a number of Japanese fans during his two-week stay in Tokyo for the 1976 Japanese Grand Prix.

As for Hunt’s marriage to former model Suzy Miller and what happened after, boy, did the movie get it wrong. Hunt expressed reservations almost immediately and was constantly looking for an out while Miller felt neglected but did her best to be supportive. In December 1975, after being married for just more than a year, the two celebrated Christmas in Switzerland, where Burton and Elizabeth Taylor were vacationing as well. By the end of January, Burton had ended his relationship with Taylor, and the Miller-Burton combo quickly sought out marriage. Burton called Hunt to set up a “transfer” of Miller and offered him $1 million for a divorce settlement, surprised by Hunt’s eager agreement. (Hunt said cavalierly, “Relax, Richard. You’ve done me a wonderful turn by taking on the most alarming expense account in the country.”) The two couples finalized their divorces in June 1976, and in late August, Miller and Burton got married.

Hunt had dreams of becoming the world champion, and after achieving it in 1976, he “admitted his heart wasn’t in it anymore.” He had reached the mecca and raced for a few more years before retiring halfway through the 1979 season “for reasons of self-preservation.” A year later, Hunt moved into a broadcast role with the BBC, at first taking it lightly and drinking on the job, then later becoming a “highly respected, articulate and opinionated commentator.” He really tried to clean up his life after retiring, staying sober for four years before dying of a massive heart attack at the age of 45.

Lauda on Hunt’s death: “For me, James was the most charismatic personality who’s ever been in Formula One.”

9. What exactly happened during that final race in Japan?

In the movie, Hunt’s tires are coming apart because of the rain and the wet track, but in reality, the track was starting to dry, and that, combined with Hunt’s speed, was what tore off the treads. Stopping to change tires, Hunt lost a significant lead and went back into the race unsure of what place he was in even though the spray was gone. There was no scoreboard confusion during the actual event; the only confusion was with Hunt, who thought the slow tire change had cost him the title.

Your wish is my command.

And here’s a 59-minute BBC video with real footage, commentary, and interviews about the rivalry titled “Hunt vs. Lauda: F1’s Greatest Racing Rivals”: