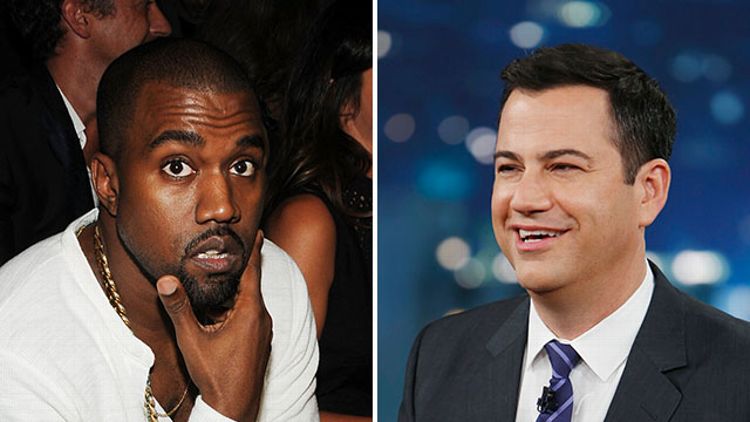 In the words of Jimmy Kimmel, “Finally, I’m in a rap feud. I always wanted to be in a rap feud.” (a) Congrats, man. Few have had the honor of doing combat with Kanye West. (b) It’s “beef.” You can call it “beef.” Now to the breakdown!

Kimmel first drew Kanye’s ire on Wednesday’s show, by poking a stick at 'Ye’s epic BBC interview. The bit was quick, harmless, and adorable: In a Kimmel Kid (re)Kreation, two little tykes played the role of Kanye and Zane Lowe, and kiddie Kanye became enraged that he was never properly credited with pushing forth the usage of leather jogging pants into the wider culture. Most importantly, for proper satirization: The bit was funny.

Kanye, uh, didn’t think so. In a sharp Twitter burst, 'Ye let loose: “JIMMY KIMMEL IS OUT OF LINE TO TRY AND SPOOF IN ANY WAY THE FIRST PIECE OF HONEST MEDIA IN YEARS” and “JIMMY KIMMEL, I DON’T TAKE IT AS A JOKE … YOU DON’T HAVE SCUM BAGS HOPPING OVER FENCES TRYING TO TAKE PICTURES OF YOUR DAUGHTER” and “JIMMY KIMMEL PUT YOURSELF IN MY SHOES … OH NO THAT MEANS YOU WOULD HAVE GOTTEN TOO MUCH GOOD PUSSY IN YOUR LIFE …” And, my personal favorite: “SHOULD I DO A SPOOF ABOUT YOUR FACE OR YOU FUCKING BEN AFFLECK … #NODISRESPECTTOBENAFFLECK #ALLDISRESPECTTOJIMMYKIMMEL!!!!” Even when he’s not trying to be, Kanye comes off both instructional and inspirational: Let us all, today, try to find a good reason to use the NODISRESPECTTOBENAFFLECK hashtag.

Last night, Kimmel addressed the incident, explaining that Kanye had actually called him direct to have a polite little conversation about all this: “He told me I had two choices. No. 1, apologize publicly … and that was really the only choice — the other choice he gave was … your life is going to be much better if you apologize.” Also: “He told me on the phone — and I swear to god this is true — ‘I am the most powerful voice in media. I am 'Pac.’ He said ‘I am 'Pac’ a few times to me … He said, ‘You will never be able to show your face at a 14-year-old’s high school football game and be cool again!’ He really is 'Pac. I mean that is right out of the Tupac playbook, isn’t it?”

As for Kanye: so far, sadly, radio silence. I’d like to say “We’ll begin round-the-clock surveillance of twitter.com/kanyewest as we await further updates,” but let’s be honest: I spend roughly 37 minutes a day staring at that thing regardless.

It’s impossible to argue that Kanye’s coming off looking good here: This kind of stuff is exactly what makes it easy, for the poor, misguided souls who are so inclined, to dismiss him. But this is also the exact same mentality that led to “I’mma let you finish.” There are certain things Kanye finds very important that pretty much no one else seems to think matter, like, at all (although certainly more people care about leather jogging pants than the VMAs being a true meritocracy). And we’ve long ago accepted that he has no off switch. Trying to win the day by claiming Kimmel looks like SpongeBob SquarePants? Certainly not the shrewdest move. But this is just the latest example of him caring so much about everything. And that’s always worth a salute.

As for Kimmel: goddamn manna from the heavens here, huh? Just getting Kanye mad is a win; doing it with this subtle, smirky kind of “fuck you” panache is even nicer. Besides, you can’t best a comedian in a public tiff. The comedian can always just make fun of himself before you do it. And Kimmel knows it. As he said last night, before seguing off the segment: “Thanks Kanye. Appreciate it.”