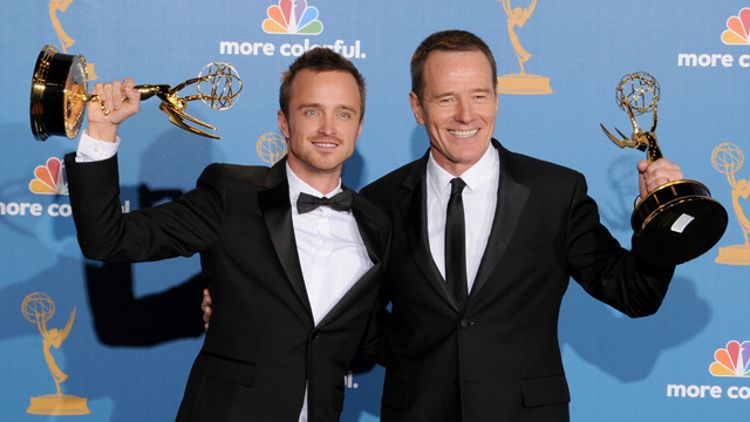 For television’s biggest stars, Emmy nominations day begins as either the best or worst of mornings, as the assiduously watched iPhone on the nightstand either lights up with the caller-ID photo of an elated publicist thrilled to rouse a nominee, or remains eerily, mockingly silent, a glassy black slab reflecting back the look of soul-annihilating disappointment on the exhausted face of the snubbed. For those lucky enough to get The Call, the rest of the day involves shuffling through a congratulatory conga line of media outlets eager to get their reactions, inevitably a litany of effusive, grateful sound bites, offered over and over again without any chance for reflection. Or honesty. Below, we attempt to decode what secret messages the nominees are actually trying to communicate through their bland “I’m so happy!”s and hostage-video-quality “It’s an honor just to be nominated!”s, as collected by THR.com:

What he said: “It’s kinda like, alright I’ve received enough love — I’m not entitled to this much love! But it’s wonderful, really. I’m not one to throw a big bash for myself, so I’m going to go for a run — I’m going to sweat. That will be my celebration. I’m very pleased, especially for Vince [Gilligan]!”
What he meant: “My show is ending soon, and I am going to savor trouncing Jon Hamm yet again. Sorry, big guy, but I am The One Who Wins. Also: Thanks, boss! You’re a genius! Please don’t Fring me! I want my Tony Soprano moment.”

Eric Stonestreet, Supporting Actor in a Comedy for Modern Family

What he said: “It feels really good. I never thought I’d be a three-time Emmy nominee. It always feels good to be nominated alongside the people you work with.”
What he meant: “We all went into this ‘let’s all submit ourselves in the Supporting Actor category’ move as a solidarity thing, but now I realize that Ed O’Neill, Jesse Tyler Ferguson, and Ty Burrell must die by my hand. Don’t open your trailer doors, bitches, because murder is knocking.”

What he said: “I’m in Wales, visiting an old friend of my dad’s, and we were cooking him lunch when my publicist called. I heard my girlfriend shriek and she started jumping up and down. I thought for a second she was prank calling me! … [The nomination] takes a bit of the string out of being hung.”
What he meant: “An Emmy would be nice, but not losing my job on the best show on TV would be nicer. I just sent Matthew Weiner a cobra in a basket as a ‘thank you’ gift. There is no antivenom.”

Mayim Bialik, Supporting Actress in a Comedy for The Big Bang Theory:

What she said: “I don’t even know that I was that conscious of the Emmys even when I was on TV as a young person, it wasn’t as big of a publicized deal as it is now — but I never ever pictured myself up there.”
What she meant: “Holy fucking shit, I was Blossom like, a minute ago! Suck it, Six! And how’s basic cable working out for you, Joey? Whoa!”

Ryan Murphy, on American Horror Story‘s shocking 17 nominations after its strategic move to the Miniseries category

What he said: “I was thrilled that it could overcome the stigma [of the horror genre] and the voters can really see how great the production values were, how wonderful the acting was, how it was really trying to make a social statement about the world that we live in today.”
What he meant: “Look, I have all the money in the world. My other show is a gigantic network hit. I’ve done my small part to destroy Julia Roberts’s career. The only thing left for me to accomplish in this world is getting my peers to give me an award for having a latex-wrapped gimp-wraith anally murder a guy with a fireplace poker. I am now tantalizingly close to having everything I’ve ever wanted. Look on my works, ye mighty Television Academy, and despair.”