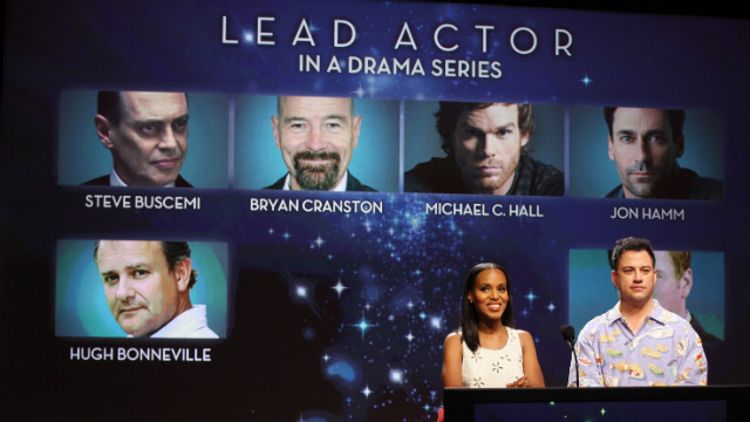 At 5:40 a.m. this morning on the West Coast, Jimmy Kimmel (in pajamas) and Kerry Washington (in need of coffee) made a lot of English people very, very happy. Downton Abbey — freed from the shackles of its bizarre “miniseries” designation — not only was free to play with the big boys in the 64th Emmy Awards, but to now dominate them with 16 nominations (for those reading in London, that’s about nine quid). The rest of the nominations followed recent trends, a smooth mix of populist favorites (Jim Parsons, Melissa McCarthy) and critical validation (Lena Dunham! Louis C.K.! Gus Fring!). For those looking for axes to grind, the usual snubs were apparent (Community, Nick Offerman, the veterinarians of Luck). But the truth is, compared to its geriatric sister award shows, the Emmys continually come the closest to actually recognizing excellence.

As for those merely looking for axes, you can rest easy: Game of Thrones snagged 11 nominations of its own. (A full list of the nominees can be found here.)

Can they bring back the CableACE awards, please?

For the first time in Emmy history, there were no Best Drama nominees from the broadcast networks — thanks to the imperialist ambitions of Downton Abbey, not even The Good Wife managed to make the cut. This could be viewed two ways: Either the definition of televised drama has shifted irrevocably toward serialization and sexposition (two trends impossible to replicate within the overlong and overly censorious broadcast season) or the Big Four’s steady diet of procedural pap and slick soap-operatics just aren’t good enough. I’d argue that both possibilities are true, and with the failure of NBC’s high-minded, experimental Awake — which was allowed to develop big themes in a very cablelike 13 episodes — little is likely to change in the near future.

Snubs — they’re not just for Walter White’s gun dealer anymore! The television academy again proved to be relatively hashtag-proof, ignoring culty obsessions like Parks and Recreation (and particularly its signature mustache, Ron Swanson), Sons of Anarchy, and Community, which, if we’re being honest, would have to reimagine its whole brand were it to be invited to the cool-kids’ table at this late date. Some will kvetch over the absence of Justified, but where would you put it? It’s no longer an insult to suggest something might be the seventh- or eighth-best hour on TV.

Mad Men, with 17 nominations, isn’t anybody’s idea of a bridesmaid, but I would have liked to have seen John Slattery and Jessica Paré recognized for their phenomenal work in a season in which they both attended balls and tripped them. (Their slots were most likely taken by the [REDACTED] Jared Harris and the always deserving Christina Hendricks and Elisabeth Moss.) Also, while a supporting nod for Homeland’s Mandy Patinkin would have been nice, I’m mostly shocked to see his beard not included in the list of nominees for Special Visual Effects.

Sometimes snubs can be a good thing! Kudos to whoever actually votes for these things for being smart enough not to recognize The Office (shut out after six straight years of noms), The Killing (not even a mercy nom for the overrated Mirielle Enos), or any of the sloppy, attention-starved shows on Starz. If we could just find some sort of actor methadone to break the Academy’s crippling addiction to Michael C. Hall and Betty White, we’d be in business.

Not to sound too much like (first-time nominee!) Zooey Deschanel, but why not look on the bright side? The Emmys got a surprising number of things right this year, from blanketing newcomer Homeland with recognition (five nine nominations, most of any freshman series) to the unexpected show of support for a low-rated (but highly debated) comedy that featured a non-judgmental episode about crack smoking. Unlike Lena Dunham — whose Girls joins Veep as a freshwoman nominee in the Best Comedy category (where they will both lose to Modern Family, but still) — Louis C.K. is forced to console himself with his seven nominations for all sorts of different things. One of those things is Best Writing in a Comedy Series, a stellar category that can also serve as a sort of shadow cabinet for funny excellence, with nods for Louie (“Pregnant”), the Girls pilot, episodes of Parks and Rec written by Amy Poehler and showrunner Michael Schur, and, most deservedly, Chris McKenna’s unquestionably brilliant “Remedial Chaos Theory” episode of Community. (Now, how Modern Family manages to be the best comedy on TV without having any of the best writing is a question for another day.)

Other pleasant surprises: Max Greenfield getting deserved kudos for his performance (and pecs) as Schmidt on New Girl; Bill Hader finally being invited to New York’s hottest club for his consistent work on Saturday Night Live; and Mark Margolis being recognized for his bellsy, ballsy, and wordless performance as Tio Salamanca on Breaking Bad.

For years, the Emmys suffered from a kind of big-brother Stockholm syndrome, in which any movie star who deigned to slum it up on the small screen would be instantly showered with statuettes. That has changed some in recent years, as TV has proved to be more than a safe haven for talented actresses who still want to work but don’t want to play Superman’s grandmother just yet. (I see you, Glenn Close!) And while Dustin Hoffman’s surprise snub for his constipated turn as a non-horse on Luck was a step in the right direction, Academy voters still have enough self-loathing in them to give a preposterous 15 nominations to the critically abhorred HBO film Hemingway & Gellhorn — a film in which Nicole Kidman’s immobile face is superimposed over those of Holocaust victims — and none were in the Unintentional Comedy category. This also helps explain Don Cheadle’s nomination for a relatively weightless performance in the not-good-enough House of Lies and Ashley Judd for her work in the quickly forgotten Missing.

Last year, Downton Abbey swept the Movie/Miniseries category even though its second season was already in production. This year, FX’s noxious American Horror Story took advantage of the same loophole — the show will continue, but with a completely different cast and story line — to amass as many nominations as Mad Men. (That said, any opportunity to get Connie Britton on the red carpet is fine by me.) There’s similar trickery at work with the nods for Sherlock (pretty much everything to do with the second-season premiere, A Scandal in Belgravia, including both Benedict Cumberbatch and Martin Freeman) and Luther, but those are well-deserved, regardless of the category. And finally, ever since they officially added a tiny Heisenberg hat to the design of the Emmy statuette, Jon Hamm’s odds of winning the Best Actor trophy have decreased to slightly less than zero. Seeing him snag a nomination for his blackface turn in the live episode of 30 Rock may be his last, best chance to shout “Banjo!” in front of his overdressed peers.

Best moments to look forward to: