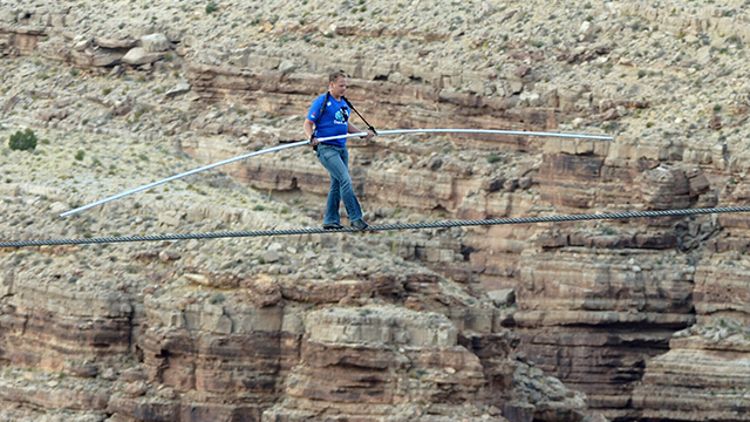 Note to cable networks cultivating new prestige dramas: You can forget all your powerful highly paid writers, deliberate pacing, crackling dialogue, scenic location shots, and charismatic antiheroes. Turns out, all you need to get America’s attention on Sunday night is a guy walking in a straight line. Well, to be more specific: He’s going to have to do it on a high-wire over the Grand Canyon, with no harness or safety net, with the wind rattling him from both sides, and with Jesus on his side. But then you’re guaranteed we’re all going to freak out on Twitter.

Last night, daredevil Nik Wallenda pulled off the feat live on the Discovery Channel’s special presentation Skywire Live, and a nation besieged by thoughts of what appeared to be this guy’s very imminent death took to Twitter to cheer him on, question his sanity, or, more likely, make fun of him.

The shots of @nikwalleenda family are too much. The prospect of dying is understood and is enough. Don't need to manually boost the drama

So was Boyz II Men:

Dude…are u crazy? We are def watching @nikwallenda cross the Grand Canyon today on @discovery!#skywire#nonet""

RuPaul wanted Wallenda to work it a bit more:

This is the best advertisement Jesus has had in forever! #skywire

But Seth Meyers wasn’t so sure it was Jesus helping Wallenda across:

I think all Muggles are insane. #skywire

And Tyler, The Creator was bummed no one gave him the heads up:

WAIT THERE IS A NIGGA WALKING ACROSS THE GRAND CANYON BACK HOME?

Of course, the danger of copycats fast became a reality: