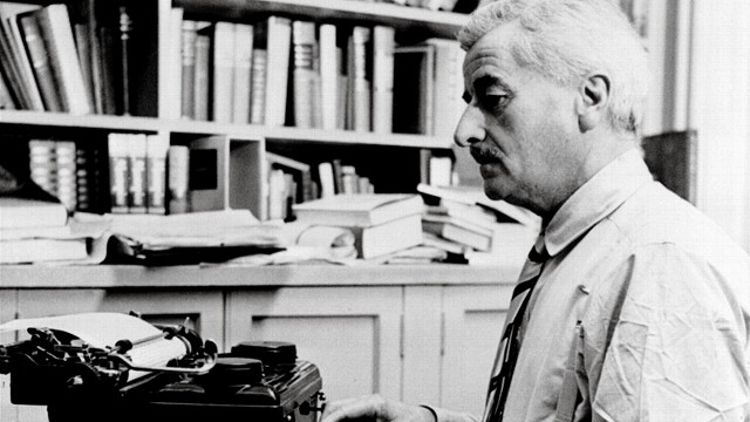 Cormac McCarthy, the Pulitzer Prize-winning author best known for his terse Western novels, has sold a spec screenplay. His books have been adapted into film three times — The Road, No Country For Old Men, and Billy Bob Thornton’s sprawling flop All The Pretty Horses — but this is his first new screenplay since 1977’s PBS telefilm The Gardener’s Son. The new script is called The Counselor, and it concerns a lawyer who gets embroiled in the world of drug dealers. Do you think Cormac McCarthy watches Breaking Bad? I wonder what he DVRs.

The producers who closed the deal describe The Counselor thusly: “We get his own muscular prose directly, with its sexual obsessions. It’s a masculine world into which, unusually, two women intrude to play leading roles. McCarthy’s wit and humor in the dialogue make the nightmare even scarier.” The phrase “muscular prose” is ridiculous. If writers had muscles, they wouldn’t need to write prose. In honor of Cormac’s first official foray into screenwriting, here are the true Hollywood stories of other famous well-respected prose writers crossing over into film.

F. Scott Fitzgerald: Out of cash and alcoholic, Fitzgerald made it two and a half years in Hollywood (it takes two years to like it!) before jumping ship. He fell into the life of a studio hack, doing uncredited rewrites and scripting dreck like 1939’s Winter Carnival. He turned his sour experiences with the studio system into his unfinished final masterpiece The Love Of The Last Tycoon: A Western, a veiled account of the rivalry between studio heads Irving Thalberg and Louis B. Mayer.

Wiliam Faulkner: He beat Fitzgerald to Hollywood by five years, signing a contract with MGM in 1932 and coming to California for a visit that ended up lasting a decade. (It birthed fruitful collaborations with Howard Hawks.) His first credit was helping with the dialogue during the adaptation his own story “Turn About,” which was being made into the Joan Crawford vehicle Today We Live. He signed with Twentieth Century Fox next, and then Warner Brothers. He made his reputation as a screenwriter on his adaptation of Hemingway’s To Have And Have Not and Raymond Chandler’s The Big Sleep — and is almost certainly the inspiration for John Mahoney’s hard-drinking Southern novelist-cum-screenwriter character W.P. “Bill” Mayhew in the Coen Brothers’ Barton Fink.

Aldous Huxley: He fared pretty well, adapting Brave New World, Ape And Essence, and A Woman’s Vengeance from his own work, and contributing to successful versions of Jane Eyre, Pride and Prejudice and the biopic Madame Curie. He also wrote the first draft of Disney’s Alice In Wonderland, which was rejected by Walt and company, presumably on the grounds that it melts your brain into orange sherbet.

Jack Kerouac: The beat great adapted his own autobiographical novel Doctor Sax: Faust Part Three into a screenplay called Doctor Sax and the Great World Snake, which was never filmed but released as a radio drama in 2003 with voice acting by Robert Creeley, Jim Carroll, Lawrence Ferlinghetti, and Kate Pierson from The B-52s.

Vladimir Nabokov: Nabokov adapted his own Lolita into a screenplay in 1962, which was then revised until unrecognizable by Stanley Kubrick and James Harris. Nabokov received an Oscar nomination for the adaptation nonetheless. He lost to future Kojak creator Abby Mann for Judgment at Nuremberg, which was supposedly punched up without a credit by Montgomery Clift, who actually might have made a great Humbert. Nabokov’s screenplay for Lolita was published in 1974. It is considerably more faithful to the book than the Kubrick version (and longer), and goofily descriptive.

Nathanael West: He didn’t dig the West Coast so much.

Don DeLillo: Wrote Game 6, about a neurotic playwright obsessed with the 1986 World Series in the early 90s. It was produced in 2005 — starring Michael Keaton and featuring with a Yo La Tengo soundtrack — just one year after the Sox finally beat the Curse of the Bambino. The movie, directed by Soapdish‘s Michael Hoffman, was made independently for scale in 20 days. The plot involves Nicky’s rivalry with a newspaper critic who he finds out has deflowered his daughter, and his resolve to kill the man being dampened by his discovery that they share a mutual love of the Boston Red Sox. Game 6 shares themes of obsession, repetition, and escape with DeLillo’s Cosmopolis and White Noise. The evil drama critic is played by Robert Downey Jr., perhaps the only man in history who can pull off playing a heterosexual male newspaper drama critic lothario believably. (Sorry George Sanders).

Trailers of the Week: Casa De Mi Padre, I Am Bruce Lee and More