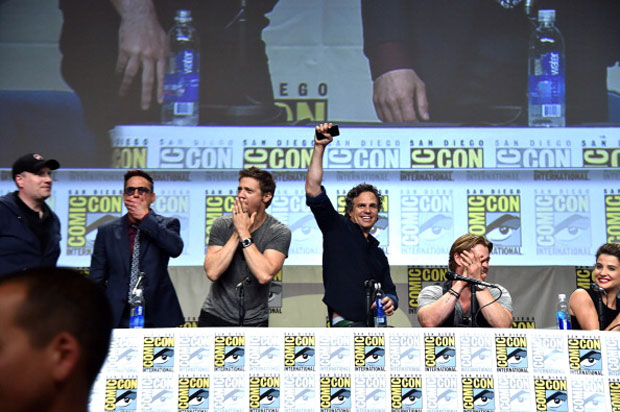 Comic-Con was probably pretty fun for everyone in San Diego over the weekend, but can it rival the sweaty joy you’re about to experience, seated wherever you’re seated on this summer Monday, as you upload all the juicy tidbits into your brainosphere? Let’s find out! Here’s basically every single talking point.

Next: a 50-second teaser was screened, and it’s been bootlegged. If you make it there in time, you’ll see a red-eyed Superman and a white-eyed Batman both looking pissed. And no shortage of fanboys going wild.

A Batman side note: Batkid Begins is a documentary trying to raise $100,000 on Indiegogo. It’s about Miles Scott, the 5-year-old leukemia patient who got to play hero for a day in San Francisco last fall. Here’s the trailer, released at Comic-Con:

Season 5 will be the first year without an episode written by A Song of Ice and Fire author George R.R. Martin. (Previous episodes by Martin include “Blackwater” and the one where Joffrey got … married.) Martin’s rationale? “I’ve got a book to write.” Good answer, ser.

Fans were treated to a two-minute video introducing nine new cast members. Among them are former Bond baddie Jonathan Pryce (Tomorrow Never Dies), Keisha Castle-Hughes (who was nominated for an Oscar at age 13 for her role in 2003’s Whale Rider), and a girl named Nell Tiger Free as an older Myrcella Baratheon.
https://www.youtube.com/watch?v=WH2ri8RhSnw?list=UUQzdMyuz0Lf4zo4uGcEujFw

There’s also a GoT Season 4 blooper reel that will make you happy — especially the last bit:

And the cast members visiting Comic-Con got very cute with the photo ops. George R.R. Martin got in on the fun too:

George RR Martin dressed up as Khaleesi for #SDCC pic.twitter.com/NWhltIFKrD

The Avengers: Age of Ultron

Arguably the next biggest image from Comic-Con is the composite of the individual teaser posters for Age of Ultron: 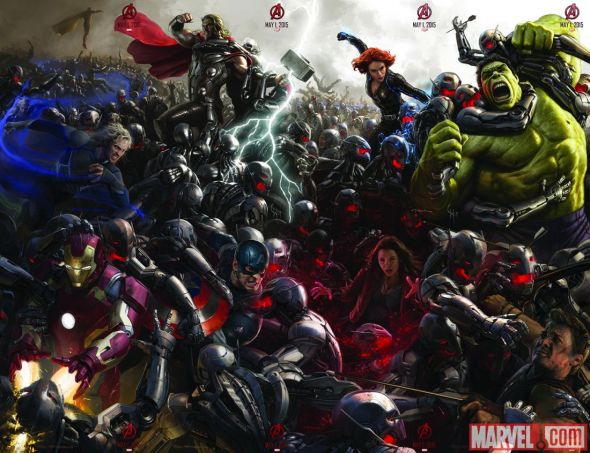 Some footage from the film screened, and initial reports have it pegged as super-dark. Also: Josh Brolin is indeed playing Thanos.

Season 5 is still two and a half months away, but AMC offered a decently long trailer to ease the wait. The gang’s going to D.C.
https://www.youtube.com/watch?v=j4GAs9TJVjM

Guardians of the Galaxy

There will be a sequel, and James Gunn will return to write and direct. July 28, 2017, has been staked out for the release. And there’s an animated series on the way, which makes sense.

The reboot got its first trailer, and it opens with Tom Hardy saying, “My name is Max. My world is fire and blood.” Can’t really beat that. It’s directed by the original Mad Max trilogy helmer, George Miller, but it looks very Zack Snyder–y. In a good way. Probably. Dusty destruction is assured, at the very least.

The Marvel movie nobody asked for seemed to gain some ground for the first time since director Edgar Wright left the project. New cast members Evangeline Lilly and Corey Stoll were in attendance — they’ll play, respectively, Michael Douglas’s daughter, Hope Van Dyne, and the villain Yellowjacket. Some quick footage was screened and well received, and director Peyton Reed’s comic-book cred was established. “He was a drummer in a punk band in the ’80s called Johnny Quest,” BuzzFeed writes, “and drew the fliers for their gigs himself — one of which was a rip-off of the Marvel Comics issue Avengers #1, featuring Reed as Ant-Man.” Reed, whose credits include Bring It On and The Break-up, also said he exchanged some “very good emails” with Edgar Wright about the project.

A minute-long teaser trailer dropped. It starts out as a Paul Thomas Anderson party, with Philip Seymour Hoffman and Julianne Moore holding a dire conversation.

Christopher Nolan made his first Comic-Con appearance ever, with Interstellar star Matthew McConaughey by his side. McConaughey boasted that this is as “by far … the most ambitious film that Christopher Nolan has ever directed.” A second trailer was screened, but since it’s not online, here’s 15 minutes of the panel. You’ll need headphones.

Kevin Smith’s creature feature got a trailer. The movie will star a mustachioed Justin Long and a terrifying Michael Parks, as well as Haley Joel Osment, Genesis Rodriguez, and Johnny Depp. (And speaking of creature features: There’s a new King Kong movie titled Skull Island on the way.)

Quentin Tarantino confirmed what Kurt Russell recently hinted at — the movie is, in fact, happening. The news came in a panel discussion about the upcoming comic-book crossover pairing Django and Zorro. “We’re just on the cusp of the Civil War,” said graphic novel veteran Matt Wagner, who’s working on the comic. “One thing we can reveal is that Django’s not with Broomhilda. He blew up a whole plantation of white people, so he’s had to separate himself from her for her own safety.”

Mothra, Rodan, and Ghidorah will show up. Gareth Edwards, who recently scored a Star Wars spinoff, will return as director.

Jordan Peele will play Stan Lee next season, and that sketch is online.

Blockbuster Talk: Scarlett Johansson is All-Powerful, But ‘Lucy’ Still Has Some ’Splainin to Do

Stillness and Cigarettes: On Ann Dowd's Subtle, Powerful Performance in 'The Leftovers'