Stillness and Cigarettes: On Ann Dowd’s Subtle, Powerful Performance in ‘The Leftovers’ 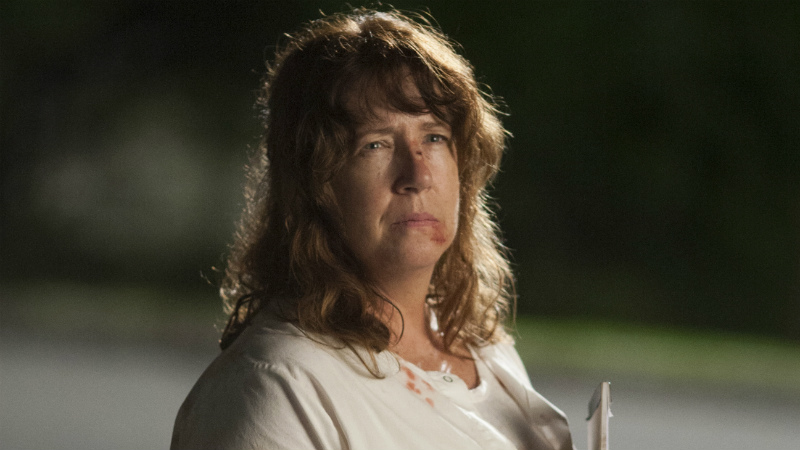 It’s the rare actor who can make herself heard without making a sound. And yet that’s precisely what Ann Dowd does week after week on The Leftovers. As Patti, the (mostly) silent leader of the white-clad Guilty Remnant, Dowd rumbles like a storm cloud into every scene she’s in, filling the screen without ever saying a word.

Watch her going glare for glare with Justin Theroux’s Kevin Garvey. While the Chief flaps his gums at her, squawking profanities and threats, she never flinches. The disdain in her eyes never dims. By not responding in kind — by not responding at all — Dowd manages the neat trick of making Garvey look foolish and making Patti’s own mysterious cause seem somehow just — or at least justified. With half of the season in the bag, it’s becoming clear we may never know exactly what happened to 2 percent of the world’s population. And, given how answer-averse showrunner Damon Lindelof has become since his time on the island, we may never know exactly what made Patti stop speaking and start dressing like a Wimbledon qualfier in winter. But to get caught up in her sharp, vengeful stare is to be stabbed in the heart with the pointlessness of the world. Instead of raging against an unresponsive universe, à la Kevin or the gambling Reverend Matt, why not just give in to it? Dowd has the kind of smothering, topsy-turvy charisma that can make a vice like smoking seem downright virtuous.

It’s a trait that’s badly needed on The Leftovers. Last night’s episode, “Gladys,” took the show’s punishing grimness to appalling, not to mention literal, levels. (Not even in Jack Donaghy’s deepest, corporate fantasies would he imagine Kathy Geiss being stoned to death in the woods.) This was the last of the hours I saw before writing my initial review and the one that left me most unsettled. The barrage of stones that began the episode cracked through more than poor Gladys’s skull — it left me feeling compromised and exposed in a way television rarely does. I don’t know that the feat alone made me like the show any more. In fact, it may have made me like it less. Lindelof’s commitment to communicating the rawness of grief — no soulmates or sideways second chances here! — is worthy of respect. But I remain unconvinced it’s worthy of weekly investment. Opening up someone’s chest isn’t the hard part about surgery. What requires real skill is knowing what to do once you’re inside.

Thank goodness, then, for Dowd, whose performance provides the emotional ballast the sinking show badly needs. Though she’s been a rock of consistency on stage and on screen for over two decades (her first big break was as Tom Hanks’s sister in Philadelphia), it’s television that has given her the greatest showcase. Beginning with her spiky turn as Cookie Kelly, Kim’s venomous mother, on Freaks and Geeks, Dowd has made a lane for herself playing strong women trapped in weakened circumstances. Often that weakness was due to script and screentime: Dowd has been memorable three different times on Special Victims Unit playing three completely different roles. Yet even when the circumstance bordered on the fetishistic and cruel – as it did earlier in the year on True Detective – Dowd managed to both stand out and stand tall. Now, some 26 years after moving to New York City from Chicago to make her name, she’s finally in demand. 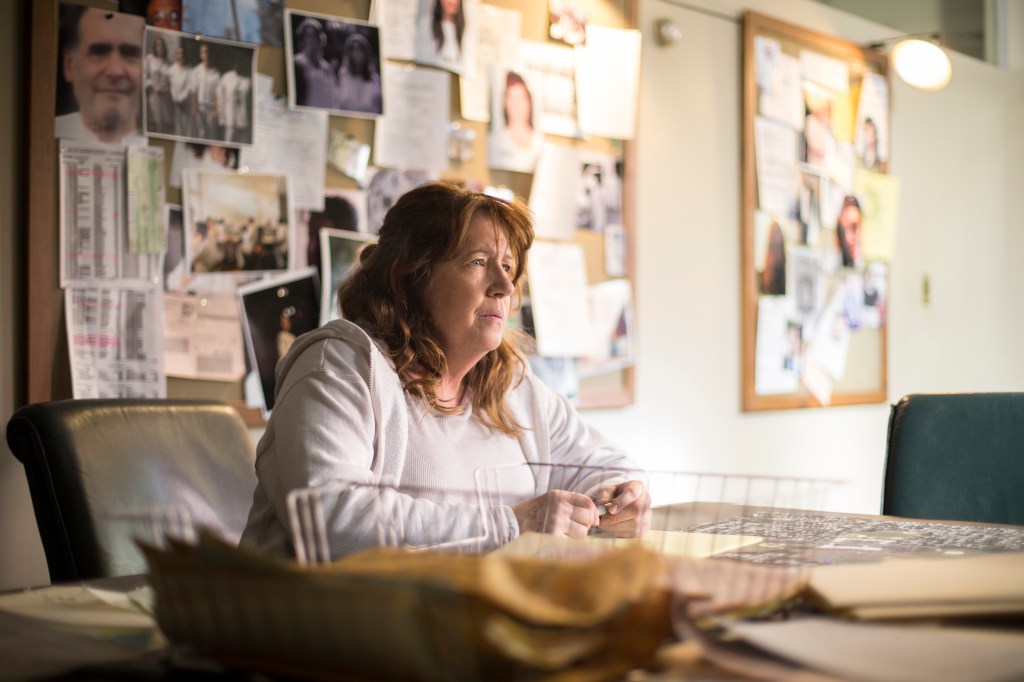 Last year, on Masters of Sex, Dowd was revelatory as Estabrook “Essie” Masters, the enthusiastic mother of Michael Sheen’s buttoned-up Bill. Essie blew into town on multiple occasions to offer support, friendship, and, for a time, mourning to Libby, her lonely daughter-in-law, all while her son quietly seethed. Eventually the reason for Bill’s resentment was revealed: He blamed his mother for offering no relief for or acknowledgement of his mistreatment at the hands of his father. The brilliance of Dowd’s performance lay in her response to that yawning disconnect. The chipperness she deployed in the present suggested a coping mechanism from the past. Essie used her own physical girth and outsize personality to gobble up all the oxygen in every room she entered — as if behavior could alter reality, as if a smile could function like a bandage. Through Dowd’s subtle work, it was clear Essie considered herself a survivor of the past just as much as Bill did. If the time had passed to fix themselves, it wasn’t too late to salvage the next generation. Hope wasn’t an abstract concept to her. It was survival.

There isn’t a shred of Essie Masters in Patti Levin on The Leftovers. The only feature they share is a bar of pure steel where their spines ought to be. To turn on a dime from such an externalized performance to such a deeply internal one is remarkable on its own. But what Dowd is up to here is even sneakier. There’s a perverse shot of humor in Patti that stands in stark contrast to the bleakness of the world around her: You could catch it playing across her face last week after Kevin arrested her — thereby falling directly into her trap. And it was on full display again last night in her reaction to Gladys’s vicious murder. Rather than mourn another death — which is different from a disappearance, as the show’s lurid corpse-lingering is quick to remind us – Patti instead packs Amy Brenneman’s Laurie into the minivan and cranks up the Hall & Oates.

The next morning, at breakfast, the whites are gone and Patti looks downright normal. Even stranger, she’s speaking freely. (“This is fucking good!” she says, crunching down on a strip of bacon.) Is this a temptation for Laurie? Or a trick? Regardless, it’s a hell of a showcase for Dowd, who makes a purple speech about religious commitment (“Doubt is fire and fire is gonna burn you up until you are but ash!”) sound as reasonable as a 12-step program. It’s the little things that do it: the small hitch in her voice when she says, “I understand the pull”; the way single tears leak out of her eyes like drops from a faucet; the tender way she kisses Laurie’s hands in sadness as much as solidarity. In one scene, Dowd took ownership of all the anguish and confusion stirred up by the episode’s brutal opening. It wasn’t that she was revealed to be in mourning. It was that, for a moment, it was possible to realize she’d never been anywhere else.

It’s no accident that the lead art for The Leftovers involves a man punching a wall. It’s a show primarily concerned with frustration and lashing out — and, true to form, that’s the reaction it’s getting from a large part of the audience as well. Thus far, Dowd is the only person on the screen capable of dealing with the cracks. I may not always like or even understand what Patti is doing. But Dowd seems to know. And that confidence makes all the difference.

Sim Kardashian: Dopamine, Gork, and More Rewards for Being Consumed by the Most Important Game in the World