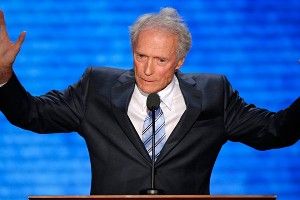 In 2008, during the run-up to Gran Torino, Clint Eastwood said that the movie would be his last: “This will probably do it for me as far as acting is concerned … You always want to quit while you are ahead. You don’t want to be like a fighter who stays too long in the ring until you’re not performing at your best.” He changed his mind, though, and will be back onscreen in this year’s Trouble With the Curve, a baseball/family drama that’s highly anticipated even though it stars Justin Timberlake as an ex-ballplayer. (Goofy romantic comedy lead? Yeah, sure. Professional athlete? I don’t know, JT.) It turned out, however, that Eastwood had one more high-profile performance lined up for 2012.

Last night, The Man With No Name showed up as a surprise guest to introduce Mitt Romney at the Republican National Convention. And things … did not … necessarily … go well. The big point of contention for most detractors is the empty chair Eastwood addressed, speaking to it as if it were Obama (whom Clint kept calling Mr. Obama) answering for his wrongdoings. (Hence: #Eastwooding.) The second big point of contention is that Eastwood, who didn’t use a teleprompter for his speech, went long swaths of time without making much particular sense. (According to the Associated Press, “stern-faced Romney aides winced at times as Eastwood’s remarks stretched on.”) But anyway, the chair did great. Hope it can parlay this showcase into more roles. Would love to see the chair working more regularly.