Clickbait: The Many Open Windows of ‘Unfriended’ 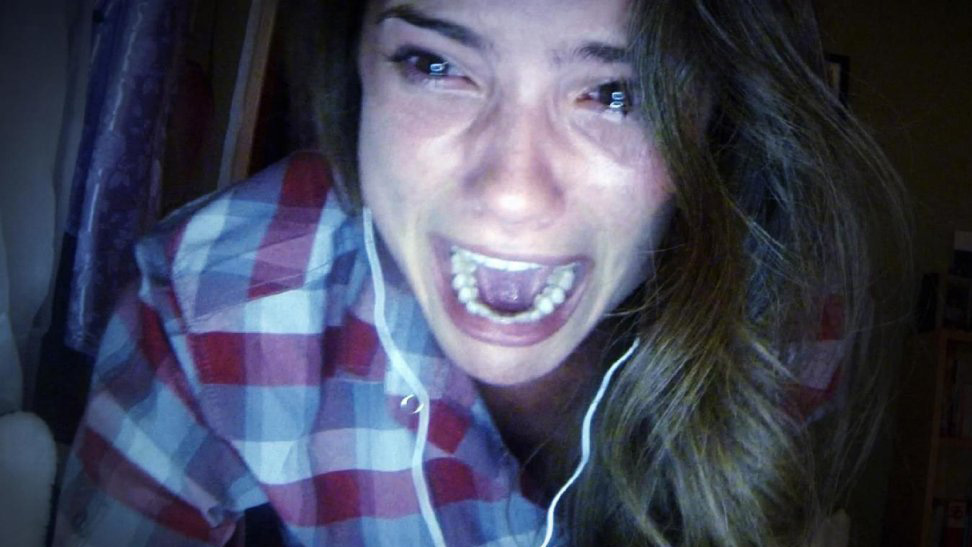 Disposability and stupidity fuel most horror movies. Death snuffs out horny teens and carefree young adults the way humans trample ants. Some of the fun of watching the disposal comes from a sense of judgmental superiority. See? I told you not to go in there! Or: Run! Faster! Supernatural horror adds an unfair omnipresence to the genre. When Satan’s everywhere, where do you run? Evil has to be confronted. The ants call a priest. In Unfriended, the ants are on Skype. For the entire movie. And the demonic force (represented by Skype’s egg-hovering-above-a-bosomy-blanket avatar) that keeps them there on this particular night, screaming and crying into their webcams, insists they stay — or die.

The production design limits itself to the laptop of Blaire (Shelley Hennig), a pleasant high school brunette who toggles between applications — Spotify, her web browser, Skype, chat windows. Her Skype calls feature as many as half a dozen windows, including hers: one for her nice-guy boyfriend, Mitch (Moses Jacob Storm); the rest for vampy, blonde Jess (Renee Olstead); douchey Adam (Will Peltz); and Ken (Jacob Wysocki), a typical jerk code jockey who, in the movie, is on these calls, more or less, to do tech support when the evening goes south. At some point, someone named Val (Courtney Halverson) joins the conversation already in progress, and the pre-expressed ill will for her makes sense: She’s the most naturally charismatic of Blaire’s gathered frenemies.

What a nightmare. Why pay $13 to view the screen-share of a teenager (who, like everyone else here, looks too old for these sorts of aimless group talks), to watch her text Mitch about the strange stuff happening on her Facebook account? You’re grateful for the egg lurking anonymously in a seventh window. That’s who’s messing with Blaire, who’s chatting threats to the group, who’s posting incriminating photos of them on Facebook, and who can somehow possess people long enough to make them shove their hands in blenders and shoot themselves in the head, all of which happens within the ambit of a webcam. The call takes place a year to the day after their cyberbullied pal Laura killed herself. Might she — or her ghost — be the egg?

As a production, Unfriended feels labor unintensive. It was made for about a million dollars and has grossed many times more than that already. There is a credited cinematographer and editor, but what do the rigors of their jobs entail here? Yet some creative challenge clearly interests the filmmakers — Levan Gabriadze directed, Nelson Greaves wrote, the relentlessly prolific Jason Blum produced. This isn’t a found-footage horror film. It’s an exercise in nominal real-time terror that transfers the haunted house to the laptop, because that’s where a lot of us live now. Here the horror movie heroine’s sprint from the home or through the woods for help or freedom — in a tank top or wet T-shirt — turns into desperate clicks through Chatroulette, which in this incarnation yields plenty of strangers yet not a single erect penis.

The movie laughs a bit at these people, especially every-teen Blaire, whose open browser tabs include Forever 21 and the show page for MTV’s Teen Wolf.1 Blaire is conveniently slow on the uptake in all manners of social parlance (“What’s a troll?” she asks at one point). Her cluelessness amounts to the usual cluelessness that’s crucial to the genre. When Ken sends Blaire a file to upload, her MacBook freezes and she mildly freaks out.

I thought I’d find it mildly depressing to sit and watch a laptop screen for even 83 minutes. Each new window only calls attention to the presentation’s one-dimensionality. But, like the Paranormal Activity movies (the supernatural; home surveillance; found footage; Jason Blum), the simplicity of the premise becomes the appeal of fearing it. Here, though, “simplicity” turns out to be another word for “cheap.” The egg makes crazy demands, forces members of the group to off themselves. But the attacks are presented with generous goosings of the soundtrack and quick flashes of nastiness that the movie disguises as a fuzzy signal. Blaire and her friends are hard to warm up to — they turn out to be the “assholes” and “dumb bitches” they call each other (even the excellent Val). When the egg forces the surviving Skypers into a truth-telling game based on secrets, the laundry is dirty enough to make you cheer for comeuppance. If this evil spirit really is Laura, she’s still kind of mean, and her meanness is contagious. The occupant of each Skype window doubles as an argument for defenestration.

Only theoretically is Unfriended scary. Hollywood has a long history of attacking rival entertainment platforms: TV, the VCR, the Internet, social media. (Just in time for the post–Golden Age television comes a summer remake of 1982’s Poltergeist.) On the surface, Unfriended appears to be part of the club. But technology doesn’t suck. People do. Software hosts vengeance. It doesn’t inspire it. Assuming otherwise would be like leaving Carrie convinced the culprit is pig’s blood. In any case, you notice the movie espouses a pungent awareness of the power of public shaming. You feel some mild critique of lives lived through web applications. What you don’t feel is sustained visceral fright. You need more than technology for that. This is Carrie, only now when the hand pops up through the grave, the first thing it does is feel for a trackpad.

'Fuller House' Is Officially Coming, So Brace Yourself for These Other Inevitable Reboots