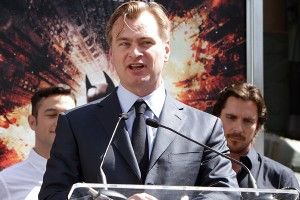 After he wrapped up his game-changing Dark Knight trilogy in atomic fashion, you wouldn’t have blamed Christopher Nolan if he’d decided to dip out anonymously to Florence — maybe enjoy an espresso and a couple of biscotti in a charming Arno-side cafe before getting back on the grind. But dude’s got business to take care of! With Man of Steel, the high-profile Superman reboot he’s producing, already on the docket, Nolan has signed up for his next directorial outing. And, surprise! — it was written by his brother Jonathan.

Teaming up for the fifth time with his little bro (previous: Memento, The Prestige, the last two Batman flicks), Nolan will direct Interstellar, a sci-fi project that, according to THR, “involves time travel and alternate dimensions in a story that sees a group of explorers travel through a wormhole. The script is based on scientific theories developed by a Kip Thorne, a theoretical physicist, a gravitational physicist and astrophysicist at Caltech.” Movieline looked into the work of this Kip Thorne fellow, and found a super-smart guy that’s totally into movie geek stuff like wormholes and blackholes. According to Thorne, however, “if any highly advanced civilization attempts to make a time machine for backward time travel, quantum effects will cause the time machine to begin to self-destruct explosively at the moment you activate it.” And yet, somewhere in there, Jonathan found some grist for a major motion picture.

By the way, Steven Spielberg was originally attached to Interstellar, but ended up seeing someone else pick it up on the very same day that his latest sci-fi project, Robopocalypse, stalled out. As Deadline reports, “Robopocalypse was to star Chris Hemsworth and Anne Hathaway and concerns a battle for survival after mankind generates its first mass intelligence computer brain only to see it escape … [Spielberg] just didn’t want to rush an expensive film, and wanted more time to work on it.”

So, in conclusion: Nolan has a new awesome sounding sci-fi flick that more or less brings to mind Inception (bwaaaang); Spielberg’s unemployed. OK, now feel free to go about your day.

The Haylor Breakup, Mariah Carey's 'All-Purple Diet' ... and Other Absurdities From This Week's Tabloids