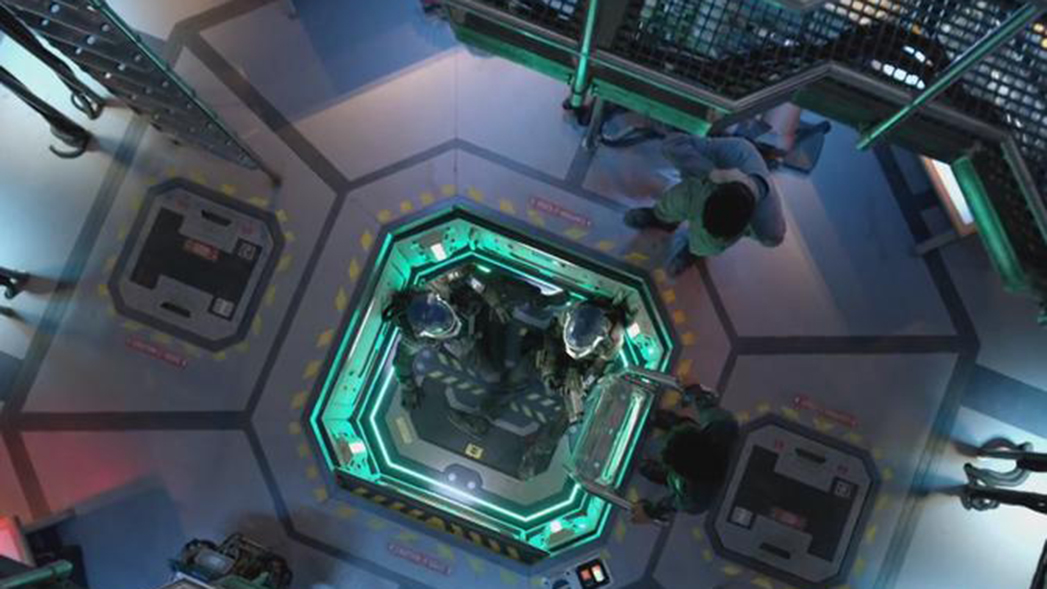 Now that’s some goddamn science fiction. This is a trailer for The Expanse, a new space opera from Syfy. There are spaceships, Thomas Jane in a weird-ass hat, zero-gravity sex, space philosophy, breathtaking imagery of Neptune and the Kuiper Belt, and some hints at real, dicey post-Earth tensions between humanity’s successor factions. A few years ago, this trailer could easily have been confused for a summer blockbuster, but the times they are a-changin’.

Almost two full years since Sharknado bit off a great white–size chunk of social media influence and helped reanchor the network’s relevance, Syfy has moved heaven and postapocalyptic earth to stake its claim as the definitive cable TV science-fiction destination. The timing was right. Science-fiction pop culture is in something of a commercial golden age — ranging from the philosophical blockbuster Interstellar to Guardians of the Galaxy. Science fiction is now so accessible (and effects are so cheap) that you can catch a ton of high-quality work outside the multiplex, from smaller indie films like Coherence to 14-minute YouTube videos that reinvent ’90s childhood nostalgia.

Syfy’s current slate — including the Ascension miniseries, the horror-thriller series Helix, and the surprising 12 Monkeys series reboot — has featured those big effects, along with big budgets, big ideas, and big names. However, the home run Syfy hopes for is still around the corner.

Despite the promise of the trailer, the up-and-down history of post–Star Trek space operas on television makes it fair to ask: Can this work? Will The Expanse experience the kind of longevity and subcultural relevance of another Syfy property, Stargate SG-1, or will it crash and burn into short-lived cult relevance like the fizzle of Fox’s Firefly?

If the source material is any indication, it could work. The Expanse book series has been critically acclaimed as a standout entry into the near-future, semi-realistic space subgenre. The series has been praised for offering a nuts-and-bolts vision of the struggles of humanity’s infancy in space and the hardships faced while colonizing planets. With its ugly, fusion-powered ships and long travel times between shaky outposts in the solar system, The Expanse offers a gritty, bleak portrayal of space travel, one that stands out in a field full of warp drives and Slipspace generators.

Leviathan Wakes, the Hugo Award–nominated first book in the series and the book that the first season of The Expanse will be based on, is a compelling story. I don’t think it’s unfair to imagine that James S.A. Corey, the pseudonym of authors Daniel Abraham and Ty Franck, intended to make the book easily adaptable. The people responsible for carrying that out will be showrunners Mark Fergus and Hawk Ostby (the duo behind Children of Men), along with Naren Shankar (who worked for CSI as a writer and producer). Character-wise, they have a lot to work with. There’s a convenient everyman turned leader in central character Jim Holden, a damaged antihero foil in Detective Miller, a diverse supporting cast, multiple plotlines, and a space murder mystery with an underlying conspiracy.

There is also just enough of the sci-fi weirdness to keep you wondering about something … else.

TV shows are all about characters, and the main factor that will dictate whether The Expanse catches on will be if the onscreen characters can match those in the books. The supporting cast looks intriguing, and it will be interesting to see how the show meshes the talents of some exciting unknowns, like Dominique Tipper as ship engineer Naomi Nagata, with more seasoned performers like Emmy Award winner Shohreh Aghdashloo.

The show has been cast to capture the diversity of the book’s characters and the powerful women that inhabit it, a great sign for avoiding the all-too-common homogeny trap of many sci-fi endeavors. The show’s apparent billing and casting of the two leads, Jane’s Miller and Steven Strait’s Holden, also will be critical. Despite the books alternating between points of view, Holden is the undisputed main character. The decision to place Miller, the more complex and arguably better-written character, in the apparent lead for the show and casting such an accomplished actor as Jane will reverberate as the show grows.

There are still a few challenges to making The Expanse work. Those other programs noted as part of Syfy’s renaissance? They are facing some classic science-fiction struggles right now. 12 Monkeys has suffered from a morass of time-traveling inconsistencies and head-scratching moments as the showrunners try to escape the obvious dead end of Bruce Willis’s source film. There’s an understandable difficulty in adapting a convoluted movie plot to a weekly format. The show is only halfway through its first season, so there’s a chance it can find its voice, but initially glowing reviews have quickly cooled under a steady barrage of WTF moments.

Ascension, the three-part space-but-not-really miniseries, pulled a bait and switch that put off many viewers and critics1 and left it trying to figure out whether it wanted to be a murder mystery, a campy Mad Men in a spaceship, or a deep psychological, philosophical thriller. A full series can escape an identity crisis, can even make it compelling, but the cracks were terribly obvious in the miniseries format.

Science fiction is at its core a philosophical genre, and questions about the metaphysics of time and existence, the future of humanity, alien and artificial intelligence, and the implications of physics weirdness are the black holes at the heart of any science-fiction universe worth exploring. The genre wraps these questions in a shell of science that often doesn’t (yet) exist, so every writer is a part-time philosopher and a part-time astrophysicist. Consumers crave both wonder and realism, and providing the two in good measure is a tightrope act. The best science-fiction writers have to balance these roles, avoiding both the impulse to dive too deeply into the philosophical and to get too lost in technobabble. Flux capacitors, you know?

Movies have it easy; a two-hour format and enough gun kata, face-punching, or Willis (or Joseph Gordon-Levitt as Willis) can paper over time-traveling plot holes. Christopher Nolan can wash down cursory introductions to relativity and time dilation with Hans Zimmer pipe organ blasts. But things get a little dicier on TV. Plot holes are dissected for weeks at a time between episodes. This will make a hell of a dynamic for The Expanse’s showrunners to navigate. But they do have an inevitable few weeks’ worth of online discussion about the mechanics of zero-G missionary to buoy the ratings.

In order to make it out of the Firefly danger zone2 and into the multiple-season territory, there will be a few other hurdles to face. The books are actually pretty good about showcasing the technology and philosophy of the futurescape without descending into the abyss, so the show should be able to follow suit.

Syfy remains tight-lipped about many elements of the show, including the actual release date in 2015. But considering the trailer, the ramp-up in viral marketing (aided by a fortunate turn of space events), and actor updates from the set, it is likely we’ll know much more soon. Sci-fi lovers can begin salivating by watching the trailer. At the very least, we’ll get some space sex.