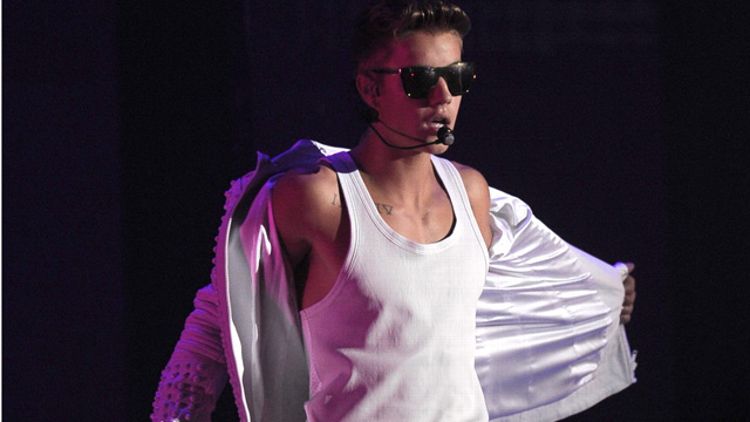 Is Justin Bieber the next hot street artist? The answer is no, absolutely not, but don’t tell the baby Biebs, who went tagging last night in Bogota, where spray-painting on public walls is legal. Although we were hoping for an airbrushed portrait of Selena Gomez as the angel of mercy, it turns out Bieber had someone else on his mind: Chris Brown! Bieber expressed his allegiance to Brown by painting “FREE BREEZY” in a squiggly purple arrow shape. He also wrote “CONFIDENT,” “CHICKEN SHIT,” and “SWAG” with a Stussy symbol as the S. I guess it’s good to know that the youth are still drawing Stussy symbols on every available surface. He also drew a pot leaf with the caption “Relax” and a Muppety shirtless figure with a “THUG LIFE” abs tattoo and the inscription “R.I.P PAC.” The Pac in this scenario refers not only to Tupac but to Bieber’s beloved deceased pet hamster, also named Pac.

Brown is currently in the midst of yet another controversy, this time for allegedly punching somebody in the face outside a D.C. hotel for trying to take a picture of him while Brown yelled, “I’m not down with that gay shit … I feel like boxing.” Brown has been released from jail, and the charges were reduced from a felony to a misdemeanor. Despite violating his probation for the time he beat up Rihanna, Brown is seemingly no longer in danger of a jail sentence. He agreed to go to rehab and take anger management classes for his famously unmanageable temper. After fighting with everyone from his own mother to girlfriend Karrueche Tran on Twitter, it has been a particularly rocky few weeks for the volatile R&B singer. Bieber was just reaching out in solidarity with the 24-year-old Brown, whom he considers a friend and mentor because they are both angry, defensive, immature little boys.

Bieber has been releasing new music leading up to an album, attempting to prove that he can expand beyond his tweenie fan base into the adult pop R&B market where Chris Brown songs thrive. Bieber’s new tunes are a little bit Timberlake, a little bit Drake, and not all that convincing. One lyric on “Hold Tight” about how “that thing is swollen” sounds more like it’s about a goiter than a butt. Bieber’s angry young man phase has been so annoying that even Miley has suggested he needs to tone it down. Strangely jacked and always sagging his pants, the 19-year-old Bieber still resembles someone in the first throes of puberty. An attempted tour mustache has been particularly embarrassing. If Bieber were smart, he’d stop trying to align himself with Brown and focus on Brown’s ex Rihanna, who might actually be able to help Bieber’s career transition from boy to man, not just manboy. As for Bieber’s foray into Colombian street art? He shouldn’t quit his day job yet.