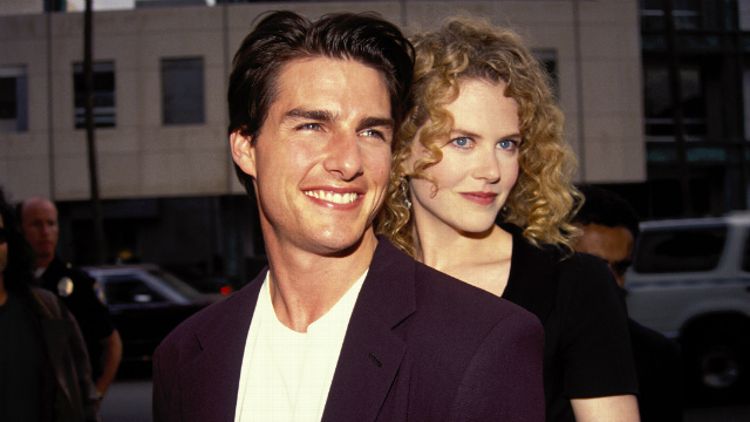 When a celebrity couple breaks up, there’s an initial deluge. The he-said-she-said, the list of alleged side pieces, the ensuing legal battle. If it’s a good couple, the breakup is enough to sustain a few weeks of tabloid covers, but then we’re all just expected to move on. Well, what if I haven’t? Some celebrity couples need to be revisited. Thus, welcome to Divorce Court, a necessary forum to decide the winners and losers of the most high-profile and most interesting celebrity divorces. This exercise could only begin with one couple: Tom Cruise and current Vanity Fair cover girl Nicole Kidman.

Tom and Nicole met making Days of Thunder, though I prefer to think of them as the young Irish lovers from Far and Away. They got married in 1990 when she was 23 and he was 28. If you decided to read this article at all, you likely already know that Tom Cruise is a Scientologist. He joined the Church because of his first wife, Mimi Rogers, and later converted his second wife, Nicole. They adopted two kids, Isabella and Connor, both of whom they raised as Scientologists as well. After 12 years and eight months, with 21 movies between them, their union fell apart. In February of 2001 Tom abruptly filed for divorce, blindsiding Nicole. It was ugly immediately. He implied that Nicole had done something nefarious. When people asked why they were getting divorced, he would say, “Ask Nicole. She knows.” Meanwhile, her team said that she improved his star quality. To avoid the equitable split of assets that California law mandates after 10 years of marriage, Tom claimed that they’d been married for nine years and 11 months. Nicole fired back, leveraging the placenta she saved from her then-recent miscarriage to prove that Tom was the father. Ultimately, the divorce was finalized on August 8, 2001. They settled 50-50, and Tom raised the kids.

Tom: $250 million
Nicole: $130 million
Winner: Tom.
There are some discrepancies regarding these numbers. While definitive numbers don’t exist, these estimates (courtesy of celebritynetworth.com) more or less match the other best guesses on the Internet. What’s that? You only trust income statistics that are reported by the IRS or the Bureau of Labor Statistics? Well, there’s also this: Tom landed at no. 27 on Forbes‘s 2013 Celebrity 100 list. Nicole hasn’t been on the list since 2009.

Tom: $4,198,016,992 over 14 movies. His biggest hits were 2005’s War of the Worlds ($591,745,540 worldwide) and 2011’s Mission Impossible: Ghost Protocol ($694,713,380). In case you forgot, Tom Cruise is a movie star, and he’s not only churning out blockbusters with huge international box office potential. Sure, the past 13 years include mistakes like Rock of Ages. But the same stretch also included Collateral. I’d say this movie is underappreciated, except everyone knows someone who loves it.
Nicole: $2,280,213,552 over 22 movies. Has anyone realized that Nicole Kidman is averaging almost two movies per year since the divorce? All the empirical evidence suggests the opposite because her visibility has decreased (save for the big Vanity Fair cover story that just came out), but maybe she is merely photographed less since she spends most of her time in Nashville and Australia now. Or perhaps she hasn’t wanted or needed to do much publicity since her biggest hits were the new animated classic Happy Feet in 2006 ($384,335,608) and the canonical film Just Go With It in 2011 ($214,945,591). Despite Grantland’s Bad Adam Sandler Movies Power Rankings, I enjoyed Just Go With It when I watched it on a plane, yet I had zero recollection of Nicole appearing in it.
Winner: Tom.
It took Tom 13 movies to cross the $4 billion mark, while poor Nicole is stuck in the $2 billions after 22 movies, plus she has been downgraded to playing the third female lead in an Adam Sandler joint.

Tom: Tom dated Penélope Cruz (June 2001–June 2004) and Nazanin Boniadi (November 2004–January 2005). If Boniadi’s name sounds familiar, it’s because she’s currently on Homeland, and, more importantly, she’s the ex that revealed the Tom Cruise Girlfriend Audition Process. She claims the Church of Scientology “audited” her before arranging the relationship with Tom, though ultimately they broke up because Boniadi wouldn’t conform to the Church’s code, or whatever it is. Cruise dumped Cruz for the same reason, thankfully leaving the pristine image of Spanish power couple Cruz and Javier Bardem intact. We don’t have to worry about any dark undercurrents in that marriage. In any case, the ballad of Cruise-Cruz was just a prelude to the song of Tom and Katie. We’ll never forget this six-year union, thanks to the birth of Suri Cruise and because it was painful for all of us, especially fans of Joey Potter. As we all know, TomKat broke up in June 2013 when Scientology became too much for her, too. Allegedly.
Nicole: This is an interesting list. Before marrying current husband Keith Urban, Nicole Kidman had dalliances with Q-Tip (2003, admitted after the fact), Lenny Kravitz (2003-04), and Steve Bing (2005). Q-Tip and Kravitz! What a spectacular rebound for the former Mrs. Cruise. Finally, Nicole found her way to fellow Aussie Keith Urban. They married in 2006, and now they have two daughters.
Winner: Nicole.
After all, she’s still married! Despite Urban’s trip to rehab four months after their wedding, they persevered and now have kids and homes in Australia, Los Angeles, and Nashville, and their marriage is not subjected to speculation about contractual obligations. We should all be happy that Nicole got this domestic victory, because Connor and Isabella Cruise were (allegedly!) indoctrinated by Scientology to choose Tom in the divorce. To quote Nicole, “My kids don’t call me mommy, they don’t even call me mom. They call me Nicole.” That’s very sad.

There are so many rumors about these two that it’s difficult to pick an appropriate starting place. There are the rumors that affect both of them: that their marriage began crumbling on the set of Eyes Wide Shut; that Nicole had an affair with Ewan McGregor on the set of Moulin Rouge!; that Nicole saved the placenta from her miscarriage to prove paternity; that their kids chose to live with Tom because of their adherence to Scientology. If this were an anonymous gossip-only site, half of those rumors would be listed as fact at this point. And yet there are so many more specific rumors. Let’s peruse the most sensational:
Tom:
The entire TomKat marriage was a sham.
Tom bought his own sonogram machine to track Katie’s pregnancy. Oh wait. This one is true! It just seems like it would be too crazy to be real.
Tom will ban magazines from red-carpet events if they write negatively about Scientology.
Tom Cruise is gay. Allegedly.
Tom Cruise and Rob Thomas from Matchbox 20 had an affair, and maybe there were some athletes and actors in the mix too.
Tom secretly dated Sofia Vergara.
All of Tom’s “auditing” sessions (Scientology’s equivalent of confession) have been recorded, just waiting for someone to leak the tapes.
Nicole:
She broke up a marriage, kind of.
She’s a hermaphrodite.
Her second daughter with Keith Urban was born via surrogate (that part is confirmed), and the surrogate may have been her sister.
She was never pregnant with her first child, either, and her sister donated the egg.
Winner: Tom.
What does it mean to win this category? If we’re trying to decide who has won post-divorce life, the person who has suffered less as result of rumors has to be the victor. Rumors about Tom Cruise are more virulent, but they are also very common. The rumors have dogged him for so long that their impact has been lessened, and it’s hard to imagine that any revelations will top the stories about the manual-labor punishments that Boniadi had to endure or the auditing altogether. Yet Tom Cruise still makes movies that people all around the world go to see.

The perception of Nicole, though, has been in decline. Without a massive critical hit or a box office success in a few years, she is now Keith Urban’s wife with children of questionable origin. Nicole claims in the December Vanity Fair article that she’s fine with this: “I’d rather revolve around somebody else’s career and then still find my own.” I guess that means she’s happy to have found her own second act peeing on Zac Efron in movies that nobody sees.

Tom: Remember when Tom Cruise jumped on Oprah’s couch?
Nicole: Remember when Nicole won a Razzie for her work in Bewitched?
Winner: Tom.
The “Tom Cruise is crazy” meme reached a fever pitch with the Oprah stunt, but Bewitched is a horrible movie.

This is a closer competition than I would have guessed. On the one hand, Nicole dominated the years immediately after the divorce. She won awards, starred in a number of respectable movies, and did not really flaunt her relationships to any negative effect. Great work! But she seems to have peaked when she got together with Keith Urban, which was right around the time that Tom declared his love for Katie Holmes by jumping on Oprah’s couch. At that point, Nicole was the sane and respectable one. That was the turning point. Since then, Tom Cruise has weathered a second divorce scandal and survived the release of multiple damning books about Scientology. He’s not immensely likable, yet he’s not consummately hatable. The shock of Tom’s marriage to Katie Holmes was wearing off just as Nicole’s career was going quiet. And as Suri got older, she looked enough like Tom to quell many of the paternity questions. Now he’s just doing regular dad stuff, like going to hockey games with his son. Most wisely, he hasn’t had a high-profile relationship since Katie Holmes, preventing any new speculation about his sexuality.

Nicole Kidman’s candor in her Vanity Fair interview puts the spotlight back on her, and makes their relationship seem real: “There’s something about that sort of existence. That is you really focus on each other and you’re in that bubble, it’s very intoxicating because it’s just the two of you. And there’s only one other person that’s going through it.’ Good PR work by Nicole, but the interview benefits them both — though she did go on to say that Keith Urban is the true love of her life. Sick burn! Nicole takes the high ground, to both of their advantages, which in this forum translates to a net negative for her. She just made Tom seem normal, as if he were like any other misguided famous person with a ton of fame and money at a young age.

Final Winner: Tom. While I’m not looking to get audited anytime soon, his staying power in the face of horrendous press is breathtaking. Tom Cruise is the inaugural winner of Divorce Court.

New Country for Old Men: On Last Vegas, The Counselor, All Is Lost, and Bad Grandpa