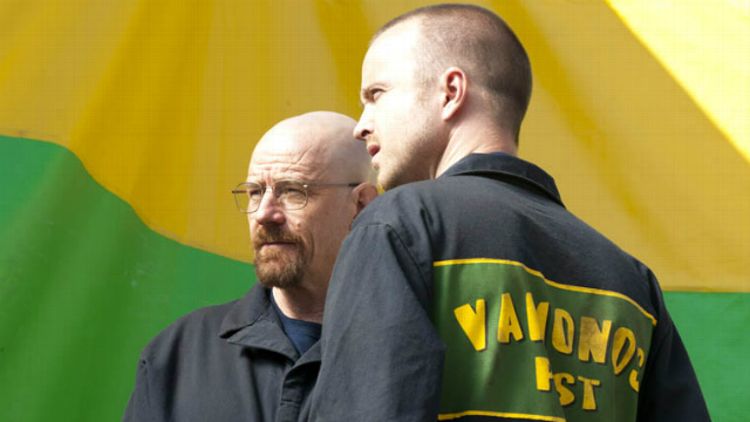 “Secrets create barriers between people. Speaking from experience. Believe me. All that you’ve done — it’s part of you.”

This is Walter White’s version of fatherly advice, passed along to a receptive Jesse Pinkman as the two of them sit together, bathed in the glow of an old Three Stooges serial and the satisfaction of a successful cook. Walt’s not wrong, of course, but Jesse — so desperate for paternal approval he’ll later offer up bricks of his own Benjamins just to deflate the tension between his two bald surrogates — doesn’t stop to think the thing through. Walt is never short on words, but drill just below the surface and they’re never not about himself. The secrets that threaten to gum up Breaking Bad’s only successful partnership — the spanner in the works, the bug in the ointment, the uncatchable fly from the Super Lab now retired to an infested McMansion in the Albuquerque suburbs (you noticed it, right? Perched on the touring case? Nothing on this show is unintentional) — aren’t between Jesse and Andrea. They’re between Jesse and the malignant megalomaniac sitting next to him, calmly sipping beer on someone else’s couch.

And then there’s the other half of the Mike Leigh movie title. Walter White’s behavior has become increasingly dark over the course of these four-plus seasons, but lying was easy for him right from the start. “Hazard Pay” provided a creepy showcase for Bryan Cranston’s perfectly calibrated prevarications: his slow, manipulative pauses in the above-mentioned convo with Jesse; his shit-eating silence when Mike big-times him. And, wildest of all, his heartfelt “confession” to Marie. If Anna Gunn’s slow psychological breakdown is finally providing us with evidence that Heisenberg’s infestation has taken root in the family home, Cranston’s mannered precision in this scene proved how utterly oblivious he is to it — or how little he cares. The pause, the heavy, breathy sigh, then the practiced fluttering of the hands; he touches his head (conveying deep thought!) instead of his mouth (which implies guilt!). But the most devious part was how completely natural it was for him not only to lie, but to treat his wife’s emotional trauma with all the respect and delicacy of a Nerf football.

So, yes, the lying has been there from the beginning, the dangling thread that foreshadowed future unraveling. But there’s one thing that Walter White didn’t lie about — and I’ve been thinking about it quite a bit. The last time he came clean to his in-laws was to tell them that the root of all his strange behavior the past year was a gambling addiction. The particulars may have been false, but the story itself wasn’t. Walt is a dangerous, fatalistic risk-taker, both with his own life and with the lives of those around him. Some viewers seemed to think that Hank figured the whole thing out last week while listening to his ex-boss marinate over some sea bass, but I don’t think it needs to be that cut-and-dry. Walt already confessed the root of his secret to Hank. And as we learned last night, the gambling isn’t going to stop anytime soon.

But because this is Breaking Bad, there won’t be any emotional shortcuts to this inevitable end — or any shortcuts at all. “Hazard Pay,” despite being full of memorable moments and new beginnings (of the same old story), felt a little rote, especially compared with the Teutonic fireworks of last week. This was a procedural episode, devoted to making connections as much as making meth. Here are all the potential new cook sites, including an old friend, Lazer Tag Arena. A lesser, less-anal show would skip right to the best choice. But Vince Gilligan spends time (and budget) explaining why the box factory is no good (this guy knows what I’m talking about), why the tortilla factory is too hot, why the last bowl of porridge is too cold. Finally we meet our new collaborators — a bunch of ex-con exterminators ready and willing to put pests into the homes of their clients — one of whom is played by Jesse Plemons (Landry from Friday Night Lights), which means either Skinny Pete and Badger’s band is about to get a new, pious lead singer or Albuquerque’s body count is about to rise considerably. I like where all this is going, but the trip made me a little road-weary; not even the fancy new “molecule” cam could spice up yet another cooking montage. The completist in me loved seeing the foreman of the Meth Laundry again, having traded his Dockers for an orange jumpsuit, but for a lot of the hour I felt like the crooked lawyer after conferring with his dead-mackerel-eyed paralegal: We really have to get through all of this today?

This was also a rare time when Breaking Bad’s bravura visuals didn’t do much to elevate the events of the story. Rather, they weighed them down. Walt’s post-Fring darkness is evident enough in both his jut-jawed fury (at Mike, mainly, for daring to suggest there’s a proper way to run a business) and his slow-burning egotism (for exactly the same reasons). I’m not sure it’s necessary for the show’s crackerjack crew of directors (including Adam Bernstein this week) to perpetually light the White house like it’s midnight on Halloween and they’re trying to avoid all trick-or-treaters. Similarly, the episode’s final meta gag — Skyler’s post-breakdown nerves are sparked again when she wakes up to machine gunfire; the living room tableaux (Walters Sr. and Jr. cheering as Scarface goes out in a bloody blaze of drugged-up glory) as living nightmare — was almost too cute. We get what Walter’s actions have done to the family. Now what are they going to do about it?

But even a lesser episode of Breaking Bad is plenty strong. It was a clever and poignant reversal that as Walt’s home life erodes, Jesse’s is finally stabilizing. Everything the former screw-up said this week seemed reasonable: from his mature appreciation of Andrea to his newfound blue-collar attitude about the Blue (“It’s less money but a bigger piece of the pie … we’re owners, not employees”). But as Walt’s charged interaction with Brock proved, Heisenberg isn’t comfortable unless he’s got the game controller in his own hand. So he breaks up the happy couple to protect his own neck and then, at the close, seems to threaten the long-term health of Jesse’s — how else to read Walt’s ominous invocation of Victor, now no longer a loyal henchman, but reimagined in Walt’s menacing words as Vicarus, a mythological meth cook who flew too close to the sun? Jesse looks plenty puzzled (and, I admit, I did too), but one thing is clear: Even with the return to the kitchen, the morality of these two is heading in distinctly opposite directions. Jesse wants someone to share his life with. Walt just wants someone to share the popcorn.

True Blood Season 5, Episode 8: 'Somebody That I Used to Know'