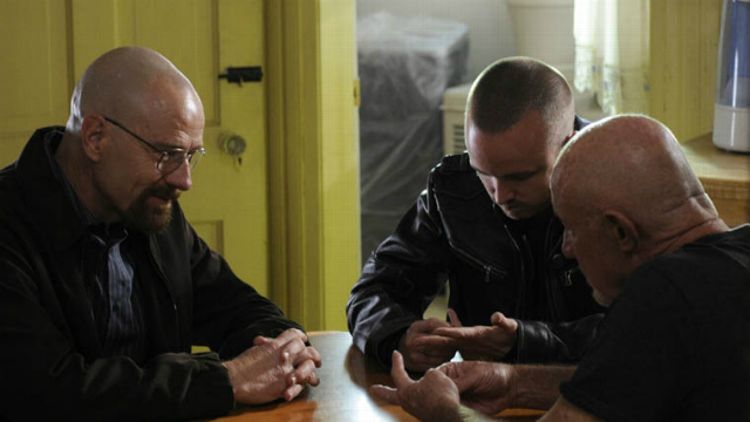 The biggest concern going into this bifurcated final season of Breaking Bad was always about structure. When Tio’s bell tolled for Gus, it made for explosive television but risky long-term planning. Other than the predictable bonds of morality, family, and legality, what would exist for Walter White to chafe against going forward? The calm, now decomposed visage of Mr. Fring gave Walt something both to aspire toward and cower from. Even if it were time for Heisenberg to lay claim to the crown, who would be there to sharpen the guillotine?

We needn’t have worried. As last night’s crackerjack “Madrigal” proved, Walt’s wheelchair bomb did more than ventilate the Casa Tranquila retirement home: It blew the doors off the show’s entire world as well. The opening five minutes of the episode were some of the very best television I’ve seen in years, a tense and bleakly comic peek into the final moments of Herr Schuler, Gus’s soon-to-be permanently silenced partner. Vince Gilligan has often described first-season Walter White as “Mr. Chips,” but here, finally, we see the real thing: a Teutonic condiment kingpin who clearly was dipping into a lot more than just puddles of Cajun Kick-Ass. Even from beyond the grave, Gus’s financial fingers still point toward Madrigal, the German conglomerate that provided all of the Super Lab’s industrial maschinen and, it seems, a good deal of franchising savvy to boot. (It was a shame to see the Pollos Hermanos sign coming down from the corporate hallway; I doubt Burger Matik has a blend of herbs and spices anything like the one invented by the late Maximino.) As the polizei swarm in his office, Schuler — like any Doritos fan, he’s well aware that once your hands are dirty, they’re awfully hard to get clean — calmly, morosely pulls an emergency defibrillator from the wall and carries it into his immaculate executive washroom. Once there he delivers a remarkable jolt: one that simultaneously stops his heart and gives this new season of Breaking Bad a burst of juice that ought to carry it well into the fall.

As scripted by Gilligan and directed by the excellent Michelle MacLaren, “Madrigal” was the sort of episode that makes you rethink the possibilities of an entire series. Up to this point, we’ve known that every seemingly minor step of Walter White’s dastardly journey has had rippling consequences. But now the waves have gone international, and suddenly the memory of the old days in the RV (the Crystal Ship, apparently) no longer seem claustrophobic; in comparison to what’s looming, they’re downright comforting. Walt’s self-serving power grab didn’t create a vacuum, it’s a goddamn black hole. What’s left behind is noisy and plenty deadly and it seems like every single character on this show is about to be sucked up into it.

But you wouldn’t know any of that from the goings-on at the White household, at least not yet. One of the constants throughout these past four seasons has been the simultaneous growth of Walt’s ego and his ignorance. While he dickers around with his beloved ricin capsule — making a decoy while stashing the real thing behind a power outlet (the headline of today’s Heavy-Handed Imagery Daily screams “POISON NOW INSIDE THE WHITE FAMILY BEDROOM”) — the gears of international justice and domestic bloodsport are churning to life. Yet the poor bastard doesn’t even realize (or much care about) the sinkhole of terror and depression into which his own wife has fallen, skipping breakfast (not a problem for Walter Jr., I’m happy to report!) and refusing to get out of bed. The only real power Walt has at present is over the emotional life of Jesse Pinkman, whose nerves are burnt down to the proverbial filter over the missing poison cigarette. Showing an attention to detail that he’s mostly lacked since donning the black hat, Walt helps Jesse clean every inch of his house — even under that gnarly papasan chair! — before setting up his big reveal: a dummy loosey stashed away in the ravenous gut of DJ Roomba, clearly on loan from his weekly dubstep gig at Pawnee’s Snakehole Lounge. (The white powder that gets flushed away is, of course, fake. We’ll see the real thing again before too long, though. Breaking Bad gets more mileage out of Chekhov than the Russian national library.) Aaron Paul is brilliant in the aftermath, finally letting real tears leak out of his perpetually red-rimmed eyes. But if the emotional symbolism wasn’t obvious enough, MacLaren piles on: Jesse’s trapped in Walt’s dark shadow now.

While our two leads continue their destructive tango, the real work is being done on the fringes. Mike has taken on a particularly interesting role in Breaking Bad’s endgame. Like the audience, he’s able to see Walter for what he truly is: “a ticking time bomb.” But unlike the audience, he’s blessed with near Supermannish levels of competence. For all of Walt’s white-lab-coated anguish, blue-collar Mike completes his outlandish tasks without complaint — and often without uttering so much as a syllable. As we learn this week, Mike is a former cop from Philly — which explains not only his fatalistic attitude but also his crippling love of crab fries — and there are enough red flags in his past to suggest dirty work, no matter what his otherwise clean record may state. Still, he’s Andre 3000 levels of cooler than cool in the interrogation room with Hank and Gomey, going full Bartleby when the questioning gets a little too aggro for his tastes. But even humble scriveners have their pressure points, and we’ve seen before that the one thing that can melt Mike’s frigid heart is a hoagie from WaWa his granddaughter, Kaylee. Once Hank reveals that they’ve seized her future Drexel tuition money, Mike’s return to the fold is inevitable.

And look, we’re long past the point of needing to praise Gilligan and his staff for their meticulous plotting, but it was a remarkably deft move to have Mike’s ambivalence about the blue sky business fatally compromised by last week’s laptop smashing stunt. It was the giant magnet that caused Gus’s multiple Cayman Islands accounts to be revealed, which, in turn, drew Mike inevitably back into a partnership with Walt and Jesse. We’ve already been shown that there are no half-measures on this series; one way or another, everyone is the instrument of his and her own slow demise. Once the toxin that is Walter White touches you, there’s no getting clean. In a show as scientific as Breaking Bad, it’s just not possible for someone to stick around for the ticking but bail before the boom.

But before all of that, we were introduced to Lydia, a loopily fragile femme fatale in Jackie O’s glasses and Jerry S’s puffy shirt. Over a mug of hot water (she carries her own stash of Stevia), she begs Mike to clean up the mess of Gus’s death by waxing 11 guys who could give the two of them up. When he doesn’t go for it, she finds someone else to undertake her little “prophylactic measure,” but only the incredible-faced Mr. Chow gets got before Mike flips the whole scenario over like Kaylee’s battery-powered toy cat. In two scenes that are frostier than the Pollos Hermanos delivery truck Mike spent time crouching in last year, he ventilates his would-be assassin from an easy chair and then turns his anger (and his silencer) on Lydia. Laura Fraser is unnerving and excellent as she begs Mike to let her adorable daughter be the one to discover her corpse. (Fun fact: Fraser was originally cast as Mrs. Brody on Homeland before being replaced by Morena Baccarin, who subsequently re-shot all of her scenes.) But Mike couldn’t do that to a kid — nor could he let his own granddaughter go hungry (hungry, hippo). So instead of taking Lydia’s life, he merely asks her for some chemicals. From the bloody ashes of one business, another seems poised to emerge. (Sorry, Madrigal. I’m not talking about Haau Chuen Wok or the mystifying Whiskerstay’s, either.)

It’s unclear whether a devotion to future generations is the best reason, or merely the most convenient reason, why this current generation seems so dead set on dead-ending itself. As Walt prepares to cook something other than lasagna, he paws a petrified Skyler like a randy john in Littlefinger’s cathouse. “We do what we do for good reasons,” he purrs. “There’s no better reason than family.” But here’s the thing: I’m sure Herr Schuler had no shortage of kinder running around at home himself, making googly eyes and shoveling down the German equivalent of Raisin Bran. And all that came from his generous ambition was a shocking end.

It’s funny that I was so worried about Breaking Bad running out of villains. Like a Tyler Perry heroine, these misguided dopes can do plenty of bad all by themselves.

Despite Pledge Not to Report Box Office Gross Out of Respect for Aurora Shooting Victims, The Dark Knight Rises Numbers Were Revealed