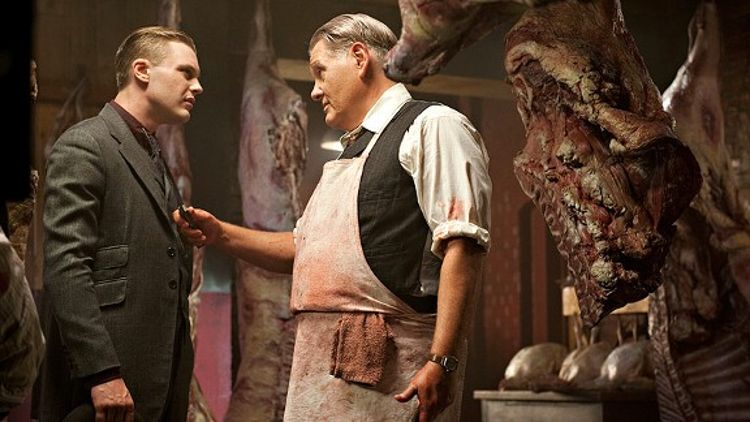 I saw so many half-faced Richards over Halloween weekend. Hey, one iconic breakout character is better than none. The best sitcom on TV right now is I Tolerate Lucy, starring Nelson Van Alden and Lucy Danziger. The hugely pregnant Lucy is bigger and blowsier than ever, begging for lemons and spreading her knees in a sad wooden chair. Margaret’s son is getting a tongue-lashing from a scary priest. It’s interesting how Nucky’s son has the same bad behavioral issues as Tony Soprano’s son, A.J. It’s almost like they learned how to lie, cheat, and steal from their successful no-good fathers. Margaret, like Carmela Soprano, is deeply religious while also aware of her husband’s transgressions and how they pay the bills (in fact perhaps attracted to that very quality of ruthlessness), and invocations of the spirit trouble her overly developed mind. The case against Nucky now includes his hiring of whores to secure votes. Sex scandals are politics. Nucky talks to George Remus.

The Monopoly Millionaires Club sits around shit-talking Nucky as always. It’ll fuel Nucky’s malignant narcissism to know that his enemies really do sit around shit-talking him all day. The black butler is named Langston (LOL, show). Jimmy’s MILF soul-kisses him in front of Uncle Scrooge Leander Whitlock McDuck Junior, who side-eyes them both, then pep-talks Jimmy. Lucy’s water breaks on a plate that she also breaks. Nucky calls Shooter McGavin for his favor again, then shuts down the pie-craving joke prosecution lawyer’s demand for cherry pie. Owen Sleater flirts with Katie in front of Margaret again. I thought her name was Kitty until this episode because of Margaret’s Irish accent (there is another character named Kitty, who is one of the Atlantic City boardwalk whores). Margaret is jealous of the nightly Owen Sleater humpathon occurring in the maid’s quarters and no longer wants to hear somebody in the throes of heated passion whose name doesn’t start with M and end with argaret Schroeder.

Van Alden is at the hospital to check out the charred remains of poor Agent Clarkson. Van Alden prays aloud and Clarkson rolls spookily to life and spouts garbled words. Van Alden goes into the hallway and becomes hypnotized by a flickering light. Nucky’s crew assembles in a drawing room to discuss the newest game plan. Lucy yells out the window for the kid to get her mom. At her best she resembles Isabella Rossellini in Blue Velvet. She gives birth alone in bed and cries. The boardwalk is all lit up as Jimmy and Angela take a romantic stroll. Jimmy spots Nucky and starts making out with Angela. Angela is pleased by what she takes to be a spontaneous romantic gesture, although it is really just Jimmy covering his own ass.

Nelson calls Rose and tells her that there are things she doesn’t know about him. He sounds extremely fucked up for a straight-edge guy. He yells “I LOVE YOU” into the phone and hangs up abruptly. Nucky rolls off Margaret after another session of Buscemi-flavored kisses, and Margaret asks where his mind is when they’re having sex. He asks what’s on her mind. She is afraid because the priest asked her to confess. She knows a lot more incriminating shit than she would like to. But really she is asking him if his mind is elsewhere during lovemaking because hers is, to thoughts of the hunky Irish head-smasher Owen Sleater.

“How Catholic are you?” inquires Nucky. And the answer is, if it’s an inch it’s probably a mile. The Butcher calls Jimmy. Everyone carries phones around like they’re cell phones in this show, because it makes it more dynamic for there to be so many phone calls constantly that relay expositional information. Jimmy says he saw two of The Butcher’s men with Nucky on the boardwalk. Margaret sweeps up a spilled bowl of cornflakes in the greenhouse and Owen Sleater asks why she doesn’t just wait for Katie to get back. He apologizes for banging out Katie under Mrs. Schroeder’s roof, then finds ways to touch her hands and brush against her shoulder. Margaret keeps sweeping up as Nucky walks in, but the floor remains wet.

Meanwhile, in the dingy apartment she shares with Van Alden Lucy brushes her hair out and puts it up as she prepares to be her own doula. Shooter McGavin talks to Senator Walter about the prosecution of Nucky Thompson. Somebody in Washington wants to see Nucky suffer. The Butcher has Herman Kaufman tied up by his feet. That the executions on Boardwalk Empire are generally the best part does not speak well to the character development, which is shakier. There’s something too pat about the characterizations. The blurry moral lines are drawn too clearly. We know which murderers to root for and which to hate. People who get their throats slit or faces burned off are pitiable but asking for it, guilty of not being hard enough for the gaudy fictionalized world of historical all-stars of crime.

Margaret goes into the booth with her hat on. She pleads the fifth, but the priest will have none of it. She saves the illegal booze-running for another session and sticks to confessing to her deep abiding boner for Owen Sleater. The bad lawyer gets kicked out halfway through his cherry pie with whipped cream (a redhead and a blonde). Back in bed, Lucy pushes out what is sure to be an insufferable human child by herself. Van Alden goes back to see Clarkson, but hasn’t spoken to Lucy. (Text Message: “THANK U 4 BIRTHING A NEW SOUL.”) Clarkson mutters “I see you. I know what you’re hiding. You ate the pie. I’ll tell mom.” and Van Alden is so spooked he flees back to the ragtime crash pad with the promised lemons. Lucy holds the baby beatifically, saying “I did it all myself.” Van Alden smiles and calls a doctor.

Lucky Luciano’s jalopy gets a flat and its riders get out, setting themselves up for a dark forest shootout. Lucky recognizes Jimmy’s voice and calls for a halt to the violence. Holding guns up in the foggy cricket-soundtracked road, they decide to team up with each other. Jimmy agrees that it’s not good business to kill everybody (although it might feel really good to do so at the time). Manny shoots one dude for good measure, and they part to meet up later. Van Alden paces around and walks into the room containing his newborn. Rose is sitting on the bed and says Lucy “has a slight fever.” BURN. Van Alden claims he fathered the child for the barren Rose to have. He tries to hold her. Rose bites his hand and runs out of the apartment. Nucky’s son poses for a portrait with a candlestick. Nucky asks what Margaret confessed about, and she says “nothing” while eyeing Sleater up and down like a rack of corned beef.