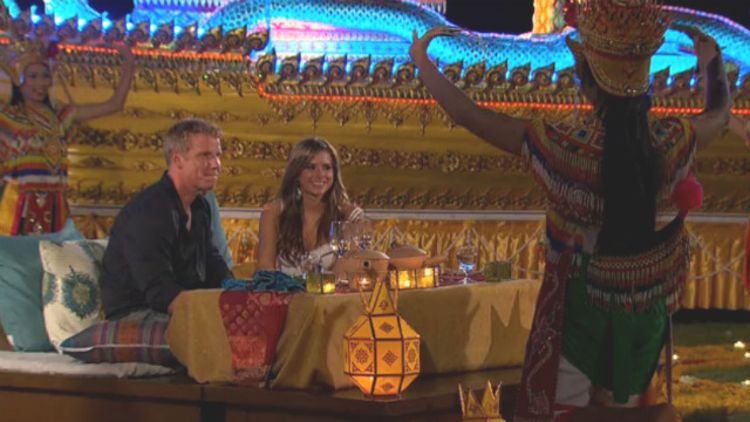 In previous seasons, Fantasy Suite Week was serious contestants’ last chance to prove their betrothal-readiness, a punishing carnal gauntlet of roiling hot tubs, thousands of menacingly dripping candles, and rotating water beds overlooking vistas so awe-inspiring that one wouldn’t be surprised if the Lord Himself parted the sublime twilight skies to extend a hand down from Heaven and offer a thumbs-up to their marathon lovemaking sessions. This year, however, our Bachelor has torn up the sexual playbook; a “born-again virgin,” Sean Lowe decreed, again and again, his nonpenetrative intentions for the now-rechristened Cuddling Suites.

To say the least, this is a challenging situation for a competition in which the cardinal rule — especially in these high-leverage, late-and-close situations — has always been “PUT OUT.” This year, there will be no putting out, no getting-it-in, no physical intimacy more intense than the most uncomfortably arid of dry-humps. And so you need our tutelage more than ever.

The name of the game at this very late stage is emotional exposure. No, you really don’t want to say those three little words when there are still two other contestants each holding a piece of a single heart, because doing so would be to risk the abject humiliation of unrequited feelings. But nothing recklessly ventured, nothing gained; you have to assume that your remaining competitors are spending their precious time with your future husband not only pledging their total and uncompromising love, but picking out tacky wedding venues, cringe-inducing baby names, and wistfully circus-themed wallpaper for the playroom in the finished basement they’re already designing. Withholding your “I love you” just because you’re uncomfortable saying that to a man with three almost-fiancées is not only strategically foolhardy, it’s tantamount to televised suicide.

Just say it. You don’t have to mean it. You can eventually learn to mean it, if things ever get that far once the show ends. (They won’t.)

2. Understand the once-secret language of the Fantasy Suite.

In less complicated times, virtually all Fantasy Suite Week communication between a Bachelor and a contestant was conducted in demure, camera-safe terms that lent an adorable pseudo-ambiguity to the Kama Sutra–shaming proceedings about to unfold behind closed doors. The acceptance of the formal invitation to the suite explicitly signaled a willingness to take any still-unconsummated relationship to a sexual level the very moment the producers offered those first, delicious moments of privacy.

Get a body pillow or something. Whatever. It’s not rocket-spooning.

If you listen closely, your Shadow Bachelor might just be throwing you a lifeline. Here’s the actual text of last night’s Fantasy Suite invitations, which diverges from what the contestants pretended to read on air:

Welcome to the majestic country of Thailand. I hope you’re enjoying your stay.

Should you choose to forgo your individual rooms, please use this key to stay as a couple in the fantasy suite.

But make no mistake, you will not be making love tonight if you accept his offer. Sean is not into that kind of thing at the moment. He literally wants to stay up all night and talk. It’s unbelievable. Why is he even on this show? It’s not to find a wife; no one finds a wife here — it’s a statistical fact. We’re adults, and we all know that.

Here is another key to an adjacent suite. Feign a headache, say you need to “see the medic,” and drop by. I promise to make all of your dreams come true.

If I scare you, it’s because I’m a man and I know how to do things. I’ve been hosting this show for a long, long time.

It’s a trick question, and there is no correct response, not even “I just haven’t met the right person … until now.” Change the subject immediately. He’s suspicious and looking for any reason to wriggle out of the impossible situation in which he now finds himself.

6. Pay attention to the weather.

Is it suddenly raining in paradise? That’s because God is crying over what’s about to happen to you. (He can’t send a skywriter to scream WATCH OUT! in contrail; the Bachelor might catch on.) It’s probably time to start steeling yourself against the crushing blow that’s coming, the one that’s about to shatter the heart you thought was finally whole into a million pieces. … then you’re safe. You’ve successfully exposed yourself emotionally and put all the power into his hands, which is the only arrangement acceptable to your Bachelor. He didn’t come on this show to be hurt; he’s come to pay back the hurt he experienced at precisely this juncture of a previous season. He still cries whenever he sees an attractive blonde woman standing near a NASCAR. He could’ve made her so happy. … then that sound you think you hear in the distance is an approaching limousine, summoned by Misery and chauffeured by Despair, ready to carry you back to the life you so recently fled in search of the ForeverLove you weren’t able to find. We’re sorry, but there’s nothing to do but quietly prepare your list of grievances for your “The Women Tell All” and “After the Final Rose” appearances. Make them good. The world is on your side now, and they want nothing more than to hear about his shortcomings. He’s strung you along for weeks with the promise of several blissful weeks together before you both succumb to the inexorable pressures of real, off-camera life, only to discard you at the last possible moment, having decided the younger, bubblier, less complicated girls would make better temporary life-partners. You owe him nothing. As your heart has now turned to stone, so must your face, shutting down any of his self-serving attempts at closure. Be unyielding in this moment, knowing that you will break in the limo. Everyone breaks in the limo.

9. Get ready to meet his family.

If you’re holding a rose, congratulations! The final test awaits.