‘Bachelor in Paradise’: America Falls in Love With Lauren I. and Everybody Hits on Jade 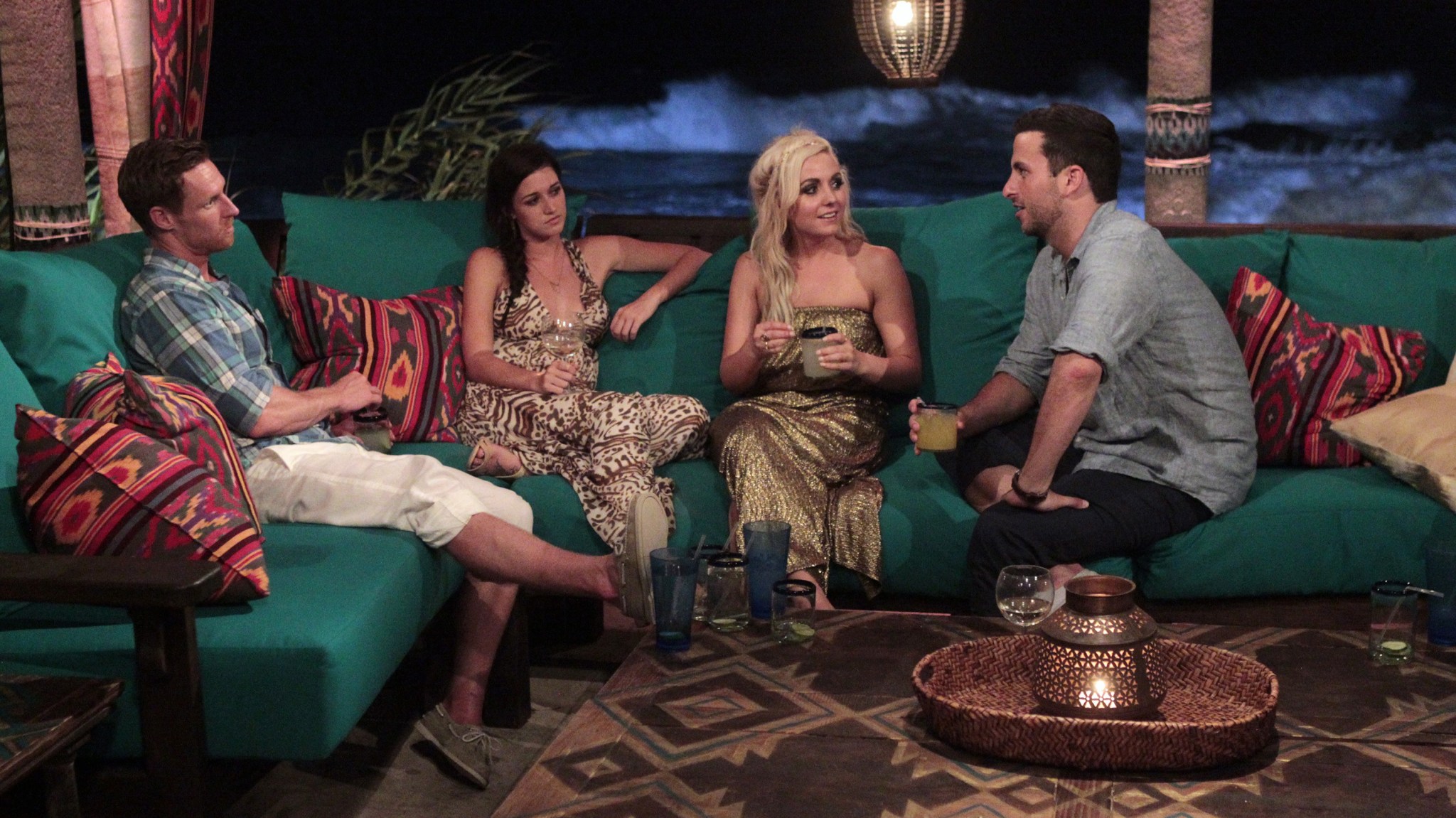 What a wonderful feeling it is to let old friends back into your home, to catch up and get reacquainted over a beverage or 12. Except, what if Bachelor in Paradise isn’t a dearly missed old friend — it’s more like a college buddy who is sleeping on your couch while he “figures some stuff out”?

You see, I have not had a chance to actually miss any of these people, because they were either just on The Bachelor/Bachelorette this year or I see their blinky faces in my sleep because I spend so much time thinking about, speculating on, and analyzing this franchise. Like the NFL and NBA, Bachelor season never ends. We just sent Kaitlyn and Shawn off on their pre-breakup tour last week, but love doesn’t take days off, it just packs its bags and heads to Mexico for a tropical vacation filled to the brim with shirtless crying dudes, shirtless crying girls, and … betrayal.

Bachelor in Paradise, the spinoff that puts franchise castoffs and curiosities in a Mexican beach resort and encourages them to frolic half-naked, is to The Bachelor/Bachelorette what NBA free agency is to the regular season and playoffs. The formality, conceptual rigidity, and narrative tedium that weighs down the flagship is tossed aside so we can watch a less sloppy version of an MTV reality show. With the pressure cranked down to about a 6, people can truly express themselves. They can ride banana boats with their best friends, or film themselves about to get breast augmentation surgery. Jillian from Chris Soules’s season brought her black box butt back, but she also made it a priority to advertise her pre-Paradise boob job. Tenley was dumped by Kiptyn,1 who then proceeded to have a child with his new girlfriend. I feel sorry for both Jillian and Tenley, but for different reasons.

These sorts of “important life updates” are welcome, because for most of our contestants, their existences have been in a state of paralysis since they stepped into the limo of shame. The most you can say about generic meatbag Tanner is that he now thinks he’s funny, or so it seems from his cat-centric catchup video. Poor Tanner is so lonely after being sent home by Kaitlyn that he has resorted to trying to make his pets laugh. Here’s an idea, Tanner: Try more string-related material. They love that stuff.

The most notable thing about cruise ship singer Carly — besides her listing the things she can’t live without as “God, family, mascara, curling iron, cut-off denim shorts” and her biggest fear being “silence” — is her tiny hands. Oh, and she’s still looking for love, of course. Ashley S. still talks to herself and other inanimate objects. It’s all quite humdrum until you get to Ashley I., a character so perfect for these shows that I have to wonder if the producers created her by putting a normal woman along with the website Meme Generator into the teleporter from The Fly. There is no other way to explain her preternatural ability to command the spotlight and create drama, unless she’s on the reality-TV equivalent of HGH, which I think is whiskey.

Whatever the reason for her high level of Bachelor competency, it rubbed off on her sister Lauren I. It’s highly irregular that Lauren would be allowed on BIP, because she’s never appeared on the Bachelor franchise before, but she seems like she’s been performing for invisible cameras in her bedroom and making fierce faces in the mirror since about middle school.

She started out strong, fun, and flirty, then quickly grew tired of all of the “old” people2 with whom she has to share a beach. Because all of the guys are unappealing to her, she settled into her role as a Mr. Robot–esque gremlin on her sister’s shoulder, encouraging her to talk to crush object Jaw-red and reminding her that her shoes are stupid. With that attitude, you’d imagine she’d be a lock to not get a rose tomorrow night, but this season’s first shocking plot twist is that a rose for Ashley I. is also a rose for her sister. They’re a package deal. Thank God for that.

In the middle of the episode, Chris Harrison brought our team of horned-up singles to the beach to witness the wedding of Lacy and Marcus from BIP Season 1. It was a completely irritating digression, but it served a purpose. Besides forcing dimbulb Mikey T to put his polo shirt back on, it reminded our contestants (and the audience) that Bachelor in Paradise isn’t just about hooking up, drinking, and riding sick-as-hell dune buggies.

It’s mostly about that, but it’s also about finding a soulmate. The destination is pure and wholesome, even if the journey isn’t. The prize for winning this contest isn’t a check for a million dollars. It’s a chance to graduate to the major leagues of relationships and escape the never-ending cycle of birth, death, renewal, and “Men Tell All” specials that is this franchise. They should have called this show Bachelor in Purgatory, because everyone is trapped on this hamster wheel until they can find real romance.

The wedding was a lovely moment, marred only by the fact that Marcus was straight-up SOAKING WET for the entire ceremony. The last thing you want to do during your wedding is perspire. It doesn’t matter that you’re on a beach and it’s hot. People will assume you’re nervous and having second thoughts. He looked like the first-act interrogation from a Law & Order episode.

The episode ended with Ashley S. and Dan in an ambulance,3 Carly and Kirk falling hard for each other, Tanner making out with Jade, and Clare from last season of BIP appearing to seduce the guys with some tantric yoga. This is Clare’s third time looking for love — after Paradise and getting the boot from Juan Pablo. She’s going to have to deal with the same issue Normcore Nick attempted to overcome during Kaitlyn’s season: the lingering feeling that appearing on these shows over and over again renders one cynical, calculating, and manipulative.

She didn’t do herself any favors by immediately announcing her intentions to hook up with Jawred, Tanner, and Alex — the three dudes who are already in relationships. The promo for next week promises a head-on collision between Clare and Ashley I. for the affection of Jared. While Clare looks like she knows this game better than anyone, Ashley I. comes off as though this is her first time leaving the house.

There’s not much room for error until more people arrive in Paradise, since it seems like just about everyone has paired up so far. After a single one-on-one, Tanner’s already prepared to tell America that he has a stronger bond with Jade than he did after almost a full season of TV dating Kaitlyn. In fact, the date went so well that they went swimming in the river during a thunderstorm. That’s a microcosm of what Bachelor in Paradise is all about. There’s less pageantry and less prestige, but a whole lot more reckless behavior. I’m fine with that. And who knows, maybe one of these drunk couples will end up tying the knot in the Season 3 premiere like Lacy and Marcus did? Like Jade said at the end of her date, “It’s Paradise. Anything’s possible.”

Things My Wife Said While I Was Trying to Take Notes:

It is a proven fact that the best Bachelor franchise insights come from the enthusiastic spouse of the recapper and not the frazzled, snark-addled writer. As such, here are a few stray observations from my ForeverLove partner about last night’s premiere.

How the ‘Mission: Impossible’ Series Gets Better With Age