Arrested Development’s Only Getting One New Season, But Don’t Let That Ruin Your Day 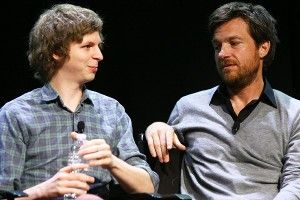 We always knew the return of Arrested Development was like a rare bird, delicate, fragile, and wondrous to — just as the morning sun breaks, refracted, through the heavy, leafy canopy of the wild — behold. Ever since Netflix made the season pickup a reality, all principals involved have stressed how hard the reunion was to pull off. Because most of the cast, Funke and Bluth and Bluth-Funke alike, stays steady working post-AD, shoots had to be arranged around their days off. (Portia de Rossi mostly had to take days off from helping Ellen stare at Katy Perry’s boobs, but don’t laugh that off. Staring at Katy Perry’s boobs is a herculean task of paramount importance.) And no one but Jason Bateman will appear in every one of the 14 new episodes. There’s also been much, much chatter about this season working as a prequel/segue to an Arrested Development movie. Meaning: Weren’t we all already assuming the Arrested Development return was a one-and-done deal? Regardless, Netflix CEO Reed Hastings, via conference call with investors on Monday, all but confirmed that AD was only getting one season. And henceforth, many tears were spilled.

Arrested is a unique property; we don’t anticipate being able to do Season 5, 6, and 7. We have less of a stake in it. It is really a fantastic one-off, which is coming together incredibly. I think it will be amazing for us, but think of it as a nonrepeatable amazing, whereas the other thing that we are doing is … trying to figure out a real mechanism where we can build shows and develop franchises over the long term. In that way, Arrested Development is a wildly successful tactic, as opposed to fundamental to the strategy.

Later, a Netflix spokesperson attempted to walk back some of those comments: “I think we all knew it was lightning in [a] bottle that we pulled it all together [one time] … We’re hopeful there will be more seasons. If anyone can pull it together, it’s going to be [Netflix chief content officer] Ted [Sarandos]. But by no means is this the end of it. We’re definitely planning to do more with them. We have first rights, so it’s not like you’d see it anywhere else. We’re absolutely hopeful there will be more.”

So, please, feel free to remain hopeful for more. But can I ask one question? Haven’t these people had enough? I’m starting to think a nation of aggrieved TV geeks, after decades of wandering, desolate and alone, in the barren wasteland that is not having network execs listen to a goddamn thing you’ve ever asked for, have gotten drunk with this recent power. Years of bellyaching about no more Arrested Development, and, OK, here you go, more Arrested Development, and now it’s “no, no, no, that’s not enough new Arrested Development”? This is some serious “if you give a mouse a cookie” bullshit right here.

Afternoon Links: How to Move on Now That Jennifer Lawrence Has Stolen All Our Hearts