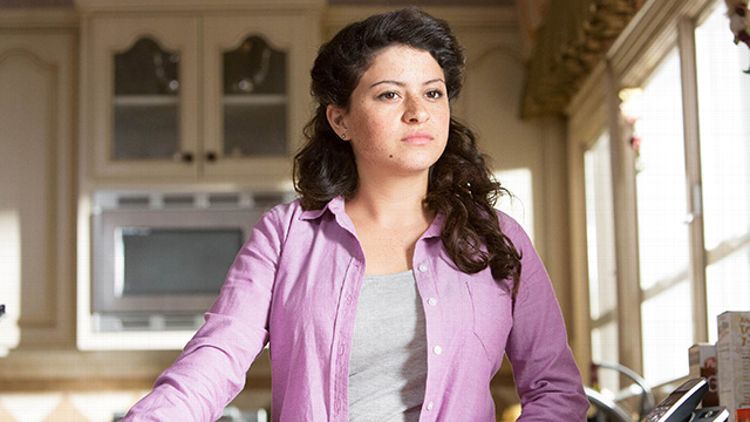 Maeby has an equivocal name but an unequivocal nature. She is decisive and, seemingly, self-assured, able to waltz into a production company as a 16-year-old and not just pass as an adult but thrive as a producer. She’s secure in her identity, even if it’s a fake one. She’s not much of a Bluth, basically. The end of Season 3 revealed that she literally wasn’t a Bluth, either. Lindsay was adopted, so Maeby is not of the Bluth blood, though she was raised in a Bluthian way — she may have filled a hole in Tobias and Lindsay’s lives, but after she was born, they kept on filling it.

Maeby’s inability to distract her parents from their own self-involvement (Invisible Girl, anyone?) moves “Señoritis” along a parallel track to the main plots, and we get to know her insecurities a little better (she’s competitive with George Michael), but she’s still not so much a Bluth family member as she is a Bluth family hostage. As the narrator notes, “It’s easier to get into a Bluth home than it is to get out.”

We open with Maeby back in high school. It’s not a flashback; Maeby is 23 and still in high school, for reasons that will become clear later. She has a boyfriend, Perfecto, but is struggling through Donny Richter’s algebra class. She shows up to be tutored by a college student, who turns out to be George Michael: “Didn’t we graduate from high school together five years ago?”

Distraught about her parents’ self-absorption in the wake of the Queen Mary accident — she pretends to drown — she decides to see if they’ll notice her not graduating: “I’ve got two whole months to flunk.” They do not notice. She announces, “So for some reason they didn’t send me a cap and gown and I was going to make one out of sheets … ” only to find that both Tobias and Lindsay have left home, leaving her (and her pictures) behind.

She attempts to find solace in her job, and throws herself into the fifth Gangie movie, “Gangie on the Ganges.” Of course, Tobias and Lindsay are in India, too. Maeby takes advantage of the horror makeup team on call (they did Real Housewives, too) and disguises herself as the Four Seasons shaman who redirected Lindsay’s story line.

They all return home, and back at the condo meeting, Maeby starts high school again, this time relocated to the ridiculous McMansion the family bought from Ed Helms’s real estate agent, James Carr. The physical emptiness echoes the family’s growing relationship divides, and soon enough Maeby is on the receiving end of competing voice mail messages from Tobias and Lindsay. They each want to be the first to say they’re leaving, and to bid her good luck in her life with the other parent (even though the separation is the other person’s fault). The widow Carr also lets her know the house is in foreclosure.

She decides to squat at the family condo and enters high school yet again. And again. “She became a senior for the third time, and then a fourth, and then it just sort of became what she did.” Her most recent yearbook quote: “Life is a roofie circle.” Been there, Maeby. Hell is other people in high school.

We rejoin our plotline in the present(ish). Visiting George Michael, Maeby becomes a part of the “pack first, no talking after scenario” that ends with Michael having to leave the dorm. She also learns about Fakeblock, which George Michael explains in tech jibberish that contains exactly two words Maeby (and the audience) can understand: “It’s privacy software that’s also anti-privacy.” His enthusiasm and the potential of the software cause her to “question the entirety of what she’d done with her life for the past several years.”

She goes to a bar to drown her sorrows and makes two important discoveries. First, she’s an excellent landlord, successfully renting out the Sudden Valley model home to the cops from To Entrap a Local Predator. Second, she espies Perfecto flashing his own badge. Richter had told her there was an undercover cop on campus! Feeling hurt and used, she decides to expose Perfecto. Is it a crime to enroll in high school if you’re over 21?

Barry Zuckerkorn knows this part of the law very well. It is, actually, illegal to go to high school if you’re over 21. “You can’t even lurk.”

Still pondering her options, Maeby returns to the condo (where Lindsay and Marky are also squatting). She’s looking for the Gangie 4 royalty check that Lindsay lifted but instead stumbles upon an invitation to be presented with an Opie lifetime achievement award. Just the thing for her bruised self-esteem! The narrator explains: “The only bigger honor would be to have an award like that named after you.” Very funny, Ron.

The Opies, as we already know, are taking place at the same hotel as the Herbert Love fund-raiser and Tony Wonder’s gay magic act, so we get to see some of the things we’ve already seen — this time from Maeby’s point of view. The important new pieces of information:

Things are starting to break in Maeby’s favor. She even gets a chance to succeed “in trapping [Perfecto] to become a predator,” as Perfecto has shown up at the Opies: “I’m just a huge fan of teenage stars.”

She gets him to admit that he’s part of a CIA sting to catch a rogue agent named “Esteves.” Also, he wants to meet Zack and Cody and the cast of Modern Family. He tells her, as far as the sting goes, “something may happen at Cinco.”

She succeeds in seducing Perfecto — who is Lucille 2’s adopted son! — and goes on pimping Lindsay and Fakeblock. Both ventures go well. Jim Cramer is so enthusiastic he suggests buying stock, once there is such a thing: “I’m calling it my first Hypothetical Buy.”

Maeby buys a huge space for the Fakeblock office — it “can hold over 500 nerds.” All of this is making George Michael incredibly nervous, especially because Maeby has a big unveiling of the product scheduled for Cinco de Cuatro.

The big day arrives and Maeby’s world starts to fall apart. She spots Herbert Love and his campaign manager giving Lindsay money directly: “He’s trying to snake the bottom bitch from my stable!” She convinces Perfecto to go after Love in some unspecified and off-camera way, but the Cinco blow-back begins immediately afterward. To make matters worse, Perfecto admits that he is, in fact, just 17 himself and not a cop.

The narrator intones that Maeby has a crisis of conscience. “And that’s when Maeby, who had spent so long lying to others and even herself, finally had to admit she had made a huge mis — ” Interrupts Maeby: “Oh, no, I’m fine.”

Told you she wasn’t much of a Bluth.

Things that put me in mind of seasons past: