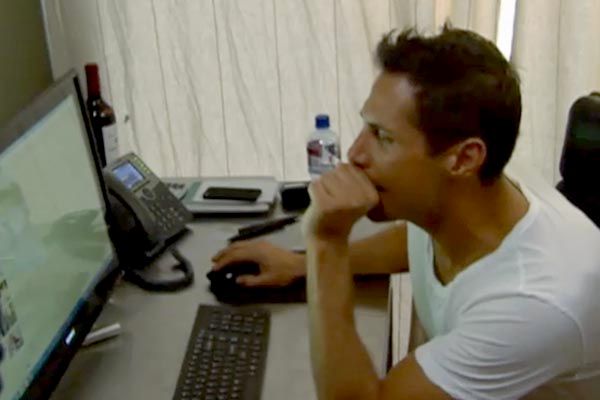 Why Are We Watching Him? He’s trying to make his own fun during his off time at inpatient couples’ therapy.

How Did He Get Here? The short version is that he’s vulgar and gross and undeserving of love.

Why Are We Watching Her? She’s trying to prepare her daughter, Shaniyah, for the imminent birth of Shaniyah’s daughter.

How Did She Get Here? Lemhele’s teen is pregnant and so is she — or, rather, she was, until recently; Lemhele just had her baby in last week’s episode.

What’s the Grossest Thing We See? Since the birth of this new sibling, Shaniyah seems to have a more conscious understanding, and hence terror, of her own child’s birth. When the subject of Shaniyah bringing her own daughter home from the hospital comes up, Shaniyah darkly suggests that she might not bring her daughter home after all. Lemhele’s response is basically to bark at Shaniyah that of course the doctors and nurses will let her bring her baby home, unless they think she’s crazy or that she’s going to harm herself or the baby, and that’s not the case, is it?! Shaniyah doesn’t really answer. Later, Lemhele — on the advice of producers, it seems pretty clear — finds a family therapist for Shaniyah to talk to about her concerns. But as Shaniyah tells us, her mother has taught her never to share personal feelings with anyone outside the family, so Lemhele’s essentially trained her not to be capable of seeking the kind of help she obviously really needs.

What Have We Learned? As a 14-year-old pregnant child, Shaniyah is teaching us all that 14 is too young to be pregnant.

Who Is This Now? Christian.

Why Are We Watching Him? He’s a proud user of anabolic steroids.

How Did He Get Here? He started using steroids to maintain his muscle tone and youthful vigor, and never stopped.

What’s the Grossest Thing We See? We don’t see it, but the grossest thing we hear is Christian’s description of a side effect of his steroid use: He grew breasts, like “women’s breasts,” around the size of plums. Eventually they became so painful that he had surgery to remove the lumps, which required surgeons to cut his nipples off, and then cut the lumps into four pieces to remove them. Was this a wake-up call for Christian? Heavens, no: It just inspired him to find a doctor who would be able to manage his steroid use — a doctor who happens to be a competitive bodybuilder himself.

What Have We Learned? There are worse things than being flabby.

Why Are We Watching Her? She’s pitching in at her friend Emily’s while Emily’s nanny is on a week’s vacation.

How Did She Get Here? At some point, she let herself become Emily’s sidekick, though it’s not quite clear how.

What’s the Grossest Thing We See? Though she is one of the titular Moms, Nicole N.’s designation is “Dog Mommy,” in which capacity she must, every time her dumb purse dog Sommer defecates, clean its long ass hair so that it doesn’t get “dingleberries.” Unrelated, but Nicole N. is also dumb enough to announce to Emily at a later point that she’s having an “epitome,” which she thinks is another word for “déjà vu”. (She means “epiphany.” And that doesn’t mean “déjà vu”, either. I don’t know why I’m telling you this. You’re not stupid like Nicole N.!)

What Have We Learned? Nicole N. probably shouldn’t ever graduate from “Dog Mommy” to “Child Mommy.”

Who Is This Now? Joraine.

Why Are We Watching Her? She’s exploring new ways to make her fiancé Marc miserable in advance of their wedding.

How Did She Get Here? Marc committed the unforgivable infraction of drinking alcohol and dancing with other women at his bachelor party, which Joraine crashed to check up on him. Since she regards dancing with, or even thinking about, other women to be “cheating,” she is taking her revenge.

What’s the Grossest Thing We See? Marc and Joraine go to taste potential wedding cakes at a local bakery, whereupon Joraine announces to Kathy, the bakery owner, that because Marc cheated on her, she’s going to want a red velvet cake in the shape of a penis to punish him. When Marc later has the temerity to lighten the mood by feeding Joraine a cake sample, he smears a little on her face; she screams at him for a minute or so and then chases him into the bathroom, beating him with a rolling pin.

What Have We Learned? Some offensive stock photography clichés might actually be based in truth.

Why Are We Watching Her? She’s shopping for shoes (and flirting inexpertly with the shoe salesman).

How Did She Get Here? She’s been spoiled by her parents, whose credit card she is using to shop.

What’s the Grossest Thing We See? OK, look, it’s possible that there are boxes of shoes off-camera that I didn’t see. But what it looks like is: Ashlee picks out six pairs of shoes, for which she pays well over $5,000. And when I say “she pays,” I mean her dad pays. After she calls him to make sure it’s OK and tries to act cute about the total.

What Have We Learned? Ashlee needs a job and a punch in the teeth, not necessarily in that order.

Lou Reed Wrote the Only Yeezus Review You'll Ever Need