Arcade Fire’s Win Butler to Dunk on People for Charity 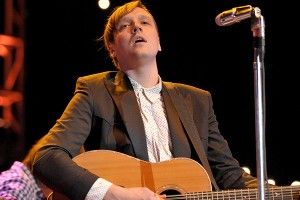 Indie rock’s most fearsome hoops duo is back! For years now, with much the same alacrity and tenacity with which their heart-stirring Montreal rock outfit collects impassioned fans, The Butler Brothers — Arcade Fire’s Win and Will — have been tearing up the world of semi-competitive pickup basketball. Why, just last year we saw Win best none other than the San Antonio Spurs’ Matt Bonner in a shooting contest, at the Toronto charity event Rock the Court. There was also Montreal’s Pop vs. Jock game, during which the Butlers displayed a Malone-Stockton–esque connection. And let us never forget that time, way back in 2007, when the competitive spirit so overtook the elder Butler that he stole some guy’s basketball.

Now, after a bit of hoops hiatus, The Butler Brothers return to the hardwood for the second round of Montreal’s Pop vs. Jock. (Proximity to hallowed MTV franchise Rock N Jock intentional, I assume? Or did stalwart Canadian music video channel MuchMusic not carry Rock N Jock?) This year’s game goes down September 22, as part of the POP Montreal festival, and features “the ferocious Butler brothers leading a team of musicians and entertainers (team POP) against an all star team comprised of standout players from the current McGill Redman and Concordia Stingers (team JOCK). Team POP will include Martin Starr of Freaks and Geeks and Party Down, pro basketball player Luke Bonner, Nikolai Fraiture of The Strokes, as well as music by Kid Koala, Régine Chassagne, and a halftime show featuring David Byrne & Moment Factory.” Nikolai Fraiture, huh? That dude is pretty tall. And Martin Starr? He looks like he’d be crafty as all hell. Combine that with the steamroller that is The Butler Brothers and, I’m sorry to say, Team JOCK doesn’t stand a chance. As soon as we have the corroborating video evidence, we’ll update you on the situation.

Prince Harry's Royal Jewels ... and Other Horror Stories From This Week's Tabloids