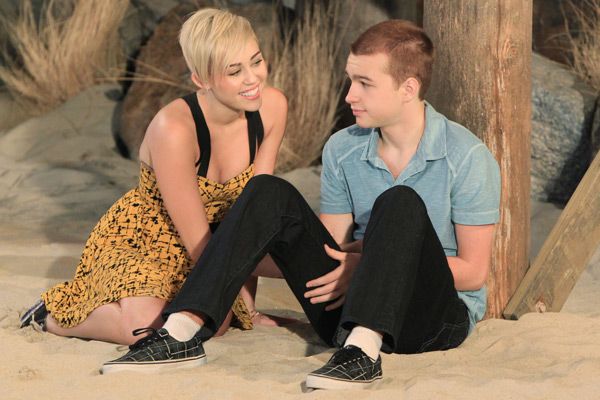 From one point of view, we have just another child star warped by early success. Instead of pills and booze, though, young Angus has gone deep into religion. Meanwhile, we rational people know that, yes, of course Two and a Half Men is shitty, but it’s not evil. Basically, Angus T. Jones lost it; for neatness’s sake, he did so in a manner that’s the polar opposite of the indulgences of his ex-co-star Charlie Sheen. Ha ha. Unless you work for a trade publication, or your livelihood is directly affected by the production of Two and a Half Men, or you’re a Jon Cryer superfan, you don’t really care what this means for the future of the show (which was picked up for a 10th season in May). You wanna grimace/laugh at Jones, and you wanna keep it moving.

But I just watched all 30 minutes of Jones’s interview (highly recommended viewing). I’ve been totally sucked in, and I’d like to talk about this for a bit.

First, let’s discuss the medium of Jones’s message: an interview with a YouTube celebrity pastor. According to AdventistChurchConnect.org, “The ‘Forerunner’ is the prolific producer of numerous videos that deconstruct current events and call out the evils and ills of today’s society, especially in the entertainment industry where he formerly worked.” He has a catchphrase: “The Truth is The Truth.” He also has a Facebook page that shows him dramatically brandishing the Holy Bible as a modern-day Sodom and/or Gomorrah crumbles behind him. So: Is this some self-righteous charlatan, grabbing on to Angus T. Jones with plans to use the kid — and his celebrity — for his own ends?

That’d be one aptly dramatic reading. In the interview, though, Jones doesn’t seem all that brainwashed. He mostly seems really eager to share his conversion story. He talks about how his mom took him into acting as a 4-year-old, and so obviously not out of his own volition, and how eventually he found himself as a teenager with disposable income and artsy dilettantism to spend it on, and it’s all pretty much on the nose for how you’d imagine the coddled Hollywood rich-kid lifestyle. He goes into great detail about the chain of events that led him to Seventh-day Adventism, a denomination whose holy day is Saturday, and how he’s been keeping the Sabbath: “I’m a hundred percent, sundown Friday, sundown Saturday … I make sure to keep it to the point because it’s been an absolute blessing in my life.” And he talks about the moment when he found God, in a smiley, childlike way: “The best way I can describe it is being hugged by your most favorite person ever but … they’re able to hug every single part of your being.”

There are some really awkward moments. At one point, Jones explains, he was “looking to go to a church with an all-black congregation. I guess you could say I was looking for a black gospel theme. I don’t know, I like black people. I’m not afraid to say it … black people rock.” Then he gets worried that what he’s saying might cause offense, and takes pains to point out that isn’t his intention. The Forerunner steps in, telling Jones, “You’re good, don’t worry about it … Angus is good. You got a pass, man. You’re good.”

When Jones gets to the part about Two and a Half Men, it’s almost an afterthought. He’s explaining how, to him, The Forerunner is the real celebrity: “People see me and they’re like, ‘Woah, you’re Jake.’ I see this guy and I’m like, ‘Dang, man of God, Forerunner, right here. I can touch him!” And then he launches into the bit mentioned above. “People say it’s just entertainment,” he adds. “Do some research on the effects of television and your brain, and I promise you you’ll have a decision to make when it comes to television, especially with what you watch.” And the eeriest part: “Just watch out. A lot of people don’t think about how deceptive the enemy is. He’s” — as in, Satan, presumably — “been doing this for a lot longer than any of us have been around. There’s no playing around when it comes to eternity.”

I don’t really know what to make of this stuff. I know I don’t want to laugh off Angus. It seems, in these videos, like he’s thought at length about what he’s saying. I know that he has a real problem, as a Christian in a fervently non-religious business, to get anyone to take him seriously — to believe that he’s not just losing it, but has instead come to an informed realization about how he wants to live his life. And I can’t help but be impressed by how strong Jones feels here. “The name of the game is compromise,” he says toward the end of his interview. “According to the Bible, when that happens, we’re no longer standing for anything. We’re no longer … on the side of the truth.”

I also feel like there’s something a bit off about the way he looks up to this guy The Forerunner, and how resoundingly he wants to denounce Two and a Half Men. I assume Jones has a problem with that show’s depiction of casual drinking and casual sex, and I think a measured conversation about the way TV can establish and affect a young person’s values system and societal standards is certainly worth having. But I’m pretty sure Two and a Half Men isn’t evil. I’m pretty sure it’s mostly just shitty.

Filed Under: The Antisheen, Two and a Half Men