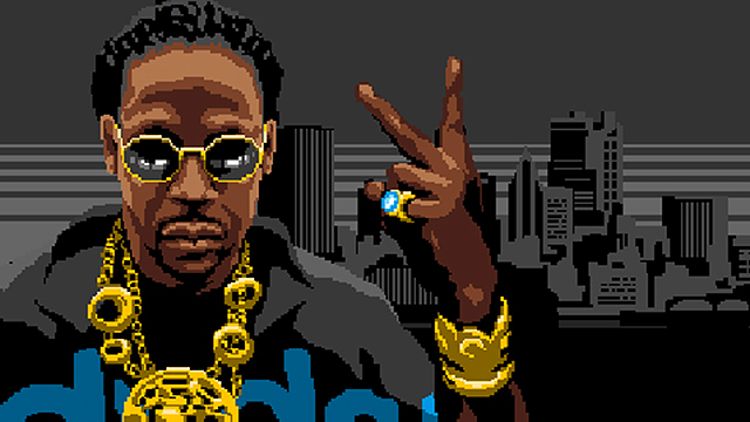 It all started with computer games.

Before I had my first console, a Nintendo that came bundled with the Super Mario Bros./Duck Hunt cartridge, I would spend hours in front of my mom’s off-white cube of an Apple Classic, playing Treasure Mountain. (It’s still the greatest game of all time. Just know that.)

As time went on, however, our living room’s “Home Entertainment System” (a term once used to describe a massive structure erected to house a very large TV that would need to be wheeled in on a dolly, units to hold VHS tapes, box speakers, and some form of cumbersome music-playing device) was increasingly overtaken by video game systems, controllers, cords, and games. A Super Nintendo soon followed the Nintendo. After that, a PlayStation arrived, with the previous two consoles still occupying space in the Entertainment System. After giving away the Nintendo (horrible move), next up was a Sega Dreamcast.

And for me, that’s where it stopped. A combination of playing outside and never wanting to step away from AIM turned video games into a thing I did when I was younger. And even though I’ve enjoyed playing them as consoles became fancier and my close friends continued to purchase them, I’ve long forbidden myself from ever buying one. Why?

I’m obsessed with them. I have a problem. Once I get into a groove, I just can’t stop. It’s like having an Oreo dispenser within arm’s reach and a refillable glass of milk. I’d do it until I died. Even in this age of iPhone app games, many of which look just incredible, I’ve managed to back out at the very last minute before allowing my finger to push “Install” on things of the Angry Birds or Paper Toss persuasion. Games are the best, but would very quickly lead to my personal and professional demise.

I thought I had successfully reached a point where the desire to “game” was a thing of the past, but then this weekend came around and, for better or worse, two games presented themselves that I just couldn’t say no to. It was a holiday and there wasn’t much work to be done, and more important, the stars of these two computer games were 2 Chainz and Dikembe Mutombo.

I initially saw the headlines for both pieces of news, but decided not to click, knowing what it might do to the rest of my weekend/year. After about four seconds, however, I gave in and thought I’d just see what the commotion was all about, with no intention of playing.

Both games are part of marketing campaigns; 2 Chainz’s for Adidas and Champ’s Sports, and Dikembe’s for Old Spice. After reading up on both, I thought I’d had enough, and went on to other things … but never closed the tabs in my browser. You know, just in case.

After 30 minutes, I gave up. I turned off my phone and started playing. This was on Thursday.

Now it’s Monday. Let’s talk about the pros and cons of each game, and ultimately decide which is better, before I check myself into gamer rehab.

You’ve got 2 Chainz, throwing up the deuces and wearing chains, so that’s a great thing. Also, that image really looks like Tauheed, so bravo to them. In addition, as you can see at the bottom of the picture, there’s a little 2 Chainz running around. He’s great, and as soon as “Start Game” is pressed he becomes the star of the show.

Dikembe Mutombo is holding two doves in his hands while playing the flute. With this third hand. This is what you are seeing right now. Just incredible.

Live in Color. I don’t know what it means yet, but hopefully it will be explained. Reminds me of In Living Color, so if there’s a Keenen Ivory Wayans cameo in this, I would be thrilled.

Dikembe Mutombo’s 4 1/2 Weeks to Save the World.

Advantage: Dikembe. Strong start. Didn’t see this coming, even though with Old Spice involved the best is only to be expected.

It is at this point that the worst thing ever happens. 2 Chainz loses his 2 chains.

At this moment, he looks up at the sky.

His shoes light up, and he realizes what he must do.

“Time to save the world, bringing that color back. 2 CHAINZ.”

How it starts, spoken by Dikembe as the text comes across the screen:

A billion some odd years ago-ish, the Mayans predicted the world would end on December 21, 2012. Which is a terrible idea since we as humans haven’t even invented self-combing hair yet. Someone had to defend our planet and prevent this from happening. And that defender had to be me: Dikembe Mutombo. For four and a half weeks I will courageously battle to save our world and, with your help, carve additional time into the Mayan calendar to buy us more time on earth.

Both men have to be heroes, but one’s issue to tackle is much more pressing than the other (end of the world vs. bringing technicolor back into our daily lives). But based on the probability for said gentleman to pull off his feat, I have to go with 2 Chainz. Granted, the gameplay hasn’t started, but I just don’t see Dikembe saving the world. His point about self-combing hair, though, is completely spot-on. We have so much more to discover, and less than a month left, maybe.

Once you press play, you have no idea what’s about to go down. Is this one level? Is it 100 levels? Is he dropping 19 more singles via this 8-bit game? Will I be on a single if I unlock 72 levels? These are all questions that aren’t answered until the moment presents itself. It’s exciting.

So we know Dikembe has four and a half weeks to save the world going into gameplay, but it isn’t clear until the level map how the levels are broken down. Each level (five in total) becomes available on a certain date.

Week 1, “The Great 2012 Dance Crisis” (above), is available to play right now (as is Week 2), but the rest simply have dates by them (the titles of the levels, which would give away the end-of-days crisis Dikembe has to solve, remain hidden):

While the business model of Dikembe’s heroism definitely gives the game a longer shelf life, it doesn’t have the excitement of jumping into 2 Chainz’s bravery, not knowing how long you could be playing as him.

For the duration of the game (I will not tell you how many levels there are, because that’s just cheating) Little 2 Chainz is doing one thing: RUNNING. All he does is run, jumping over gaps in the ground and obstacles (sometimes mailboxes, sometimes paparazzi, and sometimes ZOMBIES).

The bar on the bottom is 2 Chainz’s progress in the level, with it increasing every time he jumps to collect one of those colored icons (thus turning the level, and therefore the world, colorful again).

The two unlocked levels so far could not be more different. In the first, you’re in a jet-pack (which is a stick of jet-powered Old Spice deodorant) …

… and in the second, you’re in a cart (a throwback to that one incredible level of Donkey Kong Country, but 1 million times worse).

Even though Dikembe’s movements are much harder to figure out, making the levels much more challenging and frustrating, it is a bit more exciting than simply hitting the space bar every time you want Tiny 2 Chainz to jump over a mailbox.

During the game, when something bad happens to 2 Chainz, he says “WHOA” or “YAAAAH,” but when something great occurs, he mixes it up with “3 STRIPES,” “TURN UP,” “LEHHHGO,” and of course, “TRUUUUUU.” Everything about that is amazing. What’s also amazing: the between-level conversations he has with himself. Example (upon seeing zombies at the mall):

“WHOA, time to take my game to a whole new arena, 2 CHAINZ TO THE RESCUE, BABY.”

This plot is much more complicated than 2 Chainz’s. Before both of the unlocked levels, he is having a conversation with his trusty bear friend, Science the Bear.

Science the Bear is the one that tells Dikembe of the world’s ills and why he needs to save the world. One of these is an unnamed “South Korean dance craze” that is sweeping the world, causing people not to vote. The other:

As result of the amount of acid I’m currently not on, I’m going to have to go with 2 Chainz. I don’t know what’s going on at Camp Dikembe–Old Spice right now. I’m not mad at it, I just like a simple, linear plot, and that’s exactly what I get with 2 Chainz at the mall.

7. Random Details That Should Not Be Overlooked:

Many of the stores that sit in the background of his drama-filled sprints are incredible. One is called “Burger Now.” There’s also “Stuff,” “Sit N Surf,” “Tyme,” and last, but certainly not least:

Another great thing: When you win a level, they tell you how many points you accumulated.

Yes, I got 826 million points just for my obstacle bonus. SAY SOMETHING. Anyway, when you get your final score, 2 Chainz tells you what you got. Regardless of how you did, his answer is always:

One thing that is very easy to overlook, is that the cursor for the game, which is Dikembe’s hand, actually does the famed Dikembe “No No No” finger wag the entire time. It’s a great touch. Maybe the only thing better than that: the loading screen:

The score is 3-3, and this last hodgepodge category is the tiebreaker, but the clear winner in this category is clear.

So based on the tally, the overall 4-3 winner is Adidas, Champs Sports and 2 Chainz. No, I’m not just declaring them the winner of the first annual “Thanksgiving Weekend Computer Game Relapse Contest” simply because I beat the game in 45 minutes, accumulating over 2 billion points, and can tweet out my score:

While on the Dikembe front, I couldn’t get past FINAL BOSS OHIO (don’t ask, just play it).

I actually happen to think 2 Chainz’s game is better for society, because it has a clear beginning and end, making it possible for one to casually play it, finish it, and then go on with their life. If Dikembe was my only option, however, I wouldn’t go home for Christmas, because I’d be too busy still trying to get past FINAL BOSS OHIO.

I hope these games bring you some joy, while not leading you down a path of despair and ruin like they’re currently doing to me. Stay strong, gamers.

Dikembe Mutombo’s 4½ Weeks To Save The World