Angus T. Jones Apologizes For Hating Two and a Half Men; Rainn Wilson Washes Hands of The Office’s ‘Filth’ 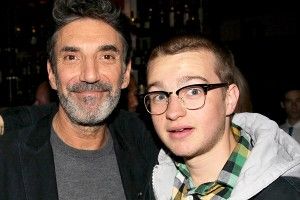 Earlier this week, Angus T. Jones let go a peculiar confession (via an oddly edited interview with a Seventh-day Adventist pastor who’s also a YouTube celebrity): “If you watch Two and a Half Men, please stop watching Two and a Half Men. I’m on Two and a Half Men and I don’t want to be on it. Please stop watching it and filling your head with filth.” He’d found God, he announced, and had decided he’d been on the path of sin; in his opinion, the hit CBS comedy that employs him is the work of the devil. And it looked, to all the world, like Two and a Half Men had gifted us with yet another bizarre off-screen spectacle, so soon after Charlie Sheen’s dalliance with the warlocks.

Even Sheen thought so! After Jones’s statement reached the masses, Charlie told People, “With Angus’ Hale-Bopp-like meltdown, it is radically clear to me that the show is cursed.” Sadly, though, it appears we’re not due for another stretched-out bit of weirdo drama out of Chuck Lorre’s production house. On Tuesday, Jones went ahead and apologized for his comments.

In a statement, Jones writes:

I have been the subject of much discussion, speculation and commentary over the past 24 hours. While I cannot address everything that has been said or right every misstatement or misunderstanding, there is one thing I want to make clear.

Without qualification, I am grateful to and have the highest regard and respect for all of the wonderful people on Two and Half Men with whom I have worked and over the past 10 years who have become an extension of my family.

Chuck Lorre, Peter Roth and many others at Warner Bros. and CBS are responsible for what has been one of the most significant experiences in my life to date. I thank them for the opportunity they have given and continue to give me and the help and guidance I have and expect to continue to receive from them.

I also want all of the crew and cast on our show to know how much I personally care for them and appreciate their support, guidance and love over the years. I grew up around them and know that the time they spent with me was in many instances more than with their own families. I learned life lessons from so many of them and will never forget how much positive impact they have had on my life.

I apologize if my remarks reflect me showing indifference to and disrespect of my colleagues and a lack of appreciation of the extraordinary opportunity of which I have been blessed. I never intended that.

Wait a minute — he doesn’t actually take anything back! He’s just apologizing to the nice people on the crew! Oh, and what’s this: “Sources told The Hollywood Reporter on Tuesday that Jones’ character, Jake, will not appear in the next two episodes that are being filmed — airing in the new year — but that his absence is purely coincidental and has nothing to do with his comments.” Very … interesting.

OK, you know what — forget all that apology stuff we mentioned earlier. Until we hear otherwise, feel free to assume that Angus T. Jones still hates Two and a Half Men because of God, and so now he’s being slowly written out of the show. And in this manner, much like Jesus and Satan’s holy war, the endless battle between Chuck Lorre and the people who work on his show shall rage on!

UPDATE: Rainn Wilson has now jumped on the Angus bandwagon, declaring The Office “filth,” via his Facebook page:

Filed Under: The Antisheen, Two and a Half Men