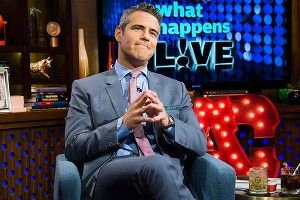 David Simon, as you probably could have guessed, does not tweet. What he does do, though, is write extensive, fiery responses to other people’s tweets — specifically, in this case, the tweets of Andy Cohen and Simon’s pal Anthony Bourdain, who argued on Twitter about the ethics of taking money from the state of Louisiana to shoot TV in New Orleans. As Simon writes on his site, in a blog post called “Why I don’t tweet. Example #47”: “I can’t be entirely indifferent to the shitty-ass, reach-around snark of some fellow [That’d be Cohen!] who rushes to throw under the bus people about whom he has no knowledge whatsoever — and does so to gain a dishonest point in a fucking tweet war.” And then Simon really goes in.

But let’s back up. This started with the news that Top Chef will be filming its upcoming 11th season in New Orleans. Hey, fantastic, right? Everyone loves New Orleans? Well, it’s a bit more complicated than that. Turns out, the reason Top Chef is heading to the N.O. is, at least in part, thanks to a $200,000 payout from the BP oil spill settlement fund to Bravo, Top Chef’s channel. Well, what in the hell?

On Eater and The Braiser, the conversation took off. Some were shocked that Bravo could be so tone-deaf as to take BP cash; others pointed out that this money was specifically earmarked for tourism-boosting activities, with which Top Chef would fit right in (other cities, including San Antonio and Seattle, have paid Top Chef to bring its circus to town as well). Still, the bottom line: Bravo is taking money from a disaster relief fund, and Bravo ain’t no disaster relievers.

As is his wont, Bourdain spoke out over the disconnect, tweeting at Cohen, Bravo’s executive VP of development/screeching banshee: “Might I suggest Cafe Reconcile as a nice recipient for the 200G @BravoAndy.” The implication was clear: Donate the money, willingly, back to a New Orleans establishment that could use it. Cohen shot back at Bourdain, trying to change the conversation to the New Orleans–based Treme (for which Bourdain has written): “@Bourdain read to the bottom, explains what the BP fund actually is — http://www.thebraiser.com/bp-paying-for-top-chef-new-orleans/ … then call me abt Treme’s tax credits from NOLA.” And in the process, he woke up a sleeping beast. Andy, you done goofed!

Fuck Twitter. In 140 characters, one can simplify anything to the point of stupidity, if not rank dishonesty. And at that length, it’s way too easy to mistake easy sarcasm, or even a certain level of snide, with clever. So, okay, Mr. Cohen called the tune. But this will require more than a tweet or two, because real life is like that. Here is a full answer to this gentleman’s bullshit in three easy stomps:

1) “Top Chef” sought and received funds from the BP spill money in a negotiation with Louisiana officials that “Top Chef” apparently sought as a unique predicate for its filming in the state. I am not criticizing this, but I am noting that this is different from Treme availing itself of the standardized tax incentives that are provided to all Louisiana television and film productions, without additional or outside negotiation.

2) Mr. Cohen is the executive vice president of development for the Bravo network itself, meaning, he sits astride the budgetary authority to just say no to any outside negotiations or givebacks that such negotiations might impose upon the state of Louisiana. His authority and standing is profoundly different from the producers, cast and crew of Treme. We are not executive vice presidents at HBO. We are vendors who agree to provide so many hours of television to HBO for an amount of money that HBO determines to be our budget. We sign that budget and promise to live by it, and we do. Given that our little drama isn’t exactly a runaway hit, if we can’t make the hours for the money offered, then HBO orders less episodes or cancels the show. But in any event, the decision to walk away from a standardized tax structure that Louisiana provides to all film production would be a decision above our pay grade. …

3) … it is fair to note that for four years, HBO allocated additional funds to underwrite a long-term campaign by Treme to raise money for a series of 501c3 charities in New Orleans. Between various fundraising campaign and events over the last four years and direct donations by producers, more than $500,000 was left behind for the use of New Orleans non-profits. … what Mr. Bourdain was urging Mr. Cohen, as I understand it, was not a blanket prohibition against accepting advantageous give-backs from Louisiana, but instead a charitable donation of that benefit, or some portion of it, to help locals.

The lesson here: Don’t engage David Simon or any of his proxies in combat unless you want to be laid down with the most blistering of civics lesson. Or, TL;DR, David Simon says, “Fuck Twitter.”

Afternoon Links: The Angry Birds Movie Is Coming in Summer 2016