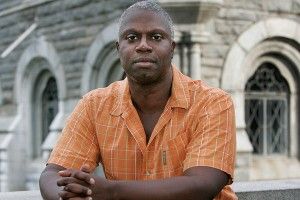 Hey, remember that cop comedy Andy Samberg is doing? The one that’s coming to us on Fox? From the mighty brains of Parks and Recreation’s executive producers Mike Schur and Dan Goor? Well, now it’s also got Andre Braugher, who’s the kind of guy you could wake up in the middle of the night, blindfold, drop in a burlap sack, drive to an abandoned field, make act alongside only animatronic Chuck E. Cheese creatures, and still get a pitch-perfect “tough cop oozing professionalism” performance out of. Which means all signs here point to “slay.”

Deadline reports that the show, as of now untitled, is a single-cam comedy set in a diverse precinct house “at the very edge of New York City.” (But which edge? They going to Washington Heights? Flushing? South Street Seaport?!) Braugher, of course, will play the captain, a no-nonsense type who “after 30 years [on] the force has finally gotten his own command, and he’s not going to let anyone, least of all Jake” — that’d be Mr. Samberg — “screw it up.” And one more bit of good news: Phil Lord and Chris Miller, who knocked cop satire out the park with 21 Jump Street, are directing.

Unrelated, but crucial: This is as good a time as any to finally learn how to pronounce “Braugher.”